One-third of Canadians would forfeit sex rather than the Internet

What pleasures would Canadians be willing to give up for a year?

Most would sooner forfeit chocolates, coffee, and alcohol – or devices, such as mp3 players, video games and mobile phones – than the Internet.

And one-third would rather give up sex than the Internet.

These are among the key findings of a recent Yahoo! 15 Year Anniversary survey, which sought to discover how much the Web has changed the lives of Canadians since the search firm was launched in 1995.

The survey was conducted for Yahoo Canada over the month of May by Ipsos OTX MediaCT, the media, content, and technology research specialty group within global market research firm Ipsos.

The survey, said Cabot, is a testament to how much Canadians have adopted a digital lifestyle.

“The Internet is now part of the very fabric of people’s personal lives,” she said. “Canadians now use it for everything from entertainment (downloading music or keeping up with the news) to comparison shopping, to doing online banking, to interacting with their children’s schools.”

Indeed, while the Internet has deeply influenced consumer behaviour in Canada on many fronts, the study suggests much of this is driven by a radical shift in perceptions and feelings towards the Web.

Fifteen years ago barely over half of Canadians felt positive and comfortable with the Internet. Today that number has risen to 90 per cent. In 1995, around 74 per cent of users had neutral or even negative feelings towards the Internet, a number that has shrunk to 27 per cent today.

Most Canadians today believe the Internet is having big impact on their quality of life. 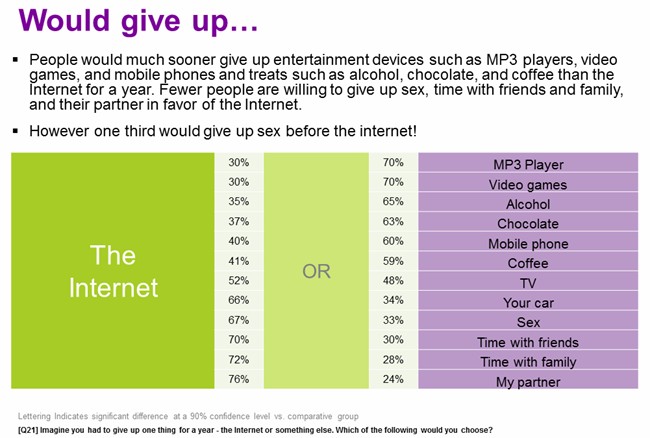 While younger folk feel the Web has made them more worldly, outgoing and candid, older people say they’ve become better informed, knowledgeable and tech-savvy as a result of the Internet.

And with perceptions shift has come a huge growth in the number of Internet users, and the time they spend online, which has more than tripled since 1995.

Also the types of activities people engage in online have changed dramatically.

“Back in ’95 people were using the Internet mostly for search and for e-mail,” Cabot noted.

“At the time 49 per cent of Canadians were e-mailing, which is pretty impressive. Today that number has grown to 87 per cent.”

However, other activities that were barely on the radar screen 15 years ago – such as accessing multimedia materials on the Internet – have soared in popularity.

IT business blogs on social networking

Forty-five per cent of those polled say they watch user-generated videos, while 48 per cent watch movies or TV programs/clips on the Web.

Social networking and file sharing are two online activities that have experienced the greatest growth since 1995.

While social networks were not heard of then, today around 67 per cent of Internet users in Canada access sites such as Facebook, Twitter, LinkedIn and MySpace. Fifty-eight per cent say the share photos, audio or video files online.

Online shopping has also soared in popularity over the past 15 years. Today, around seven in 10 Internet users in Canada make purchases and research information, while three out of five look for coupons, discounts and deals. 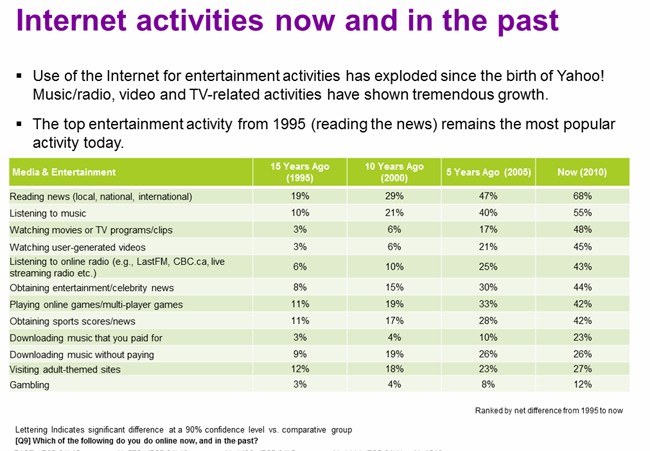 In 1995, a mere 4 per cent made travel arrangements (plane tickets, hotel reservations, and rental cars) online. Today more than half of all Internet users do this.

The Web has also had a huge impact on our careers – all the way from job search to changing the way we work.

More than three-quarters of Internet users believe the Web is an indispensible job search tool, compared with a mere 8 per cent who felt that way a decade-and-a-half ago. Two-thirds, at some time or other, have searched for a job online, while more than half (54 per cent) of those in the 25 -64 years age group have actually found a job via the Web.

One-fifth of those surveyed (20 per cent) said they telecommute (work from home using the Internet) every single day. “That’s a significant number and shows how the Web is changing lifestyles,” noted Cabot.

She said most telecommuters believe this practice tremendously enhances their overall quality of life, and this is reflected in the study findings.

“Sixty per cent say cutting down on commute time helps them work harder and better, while 54 per cent said it has improved their work-life balance,” Cabot noted. “An overwhelming majority — 72 per cent — said telecommuting is better for the environment.”