NHL putting stats and analytics at its coach’s fingertips 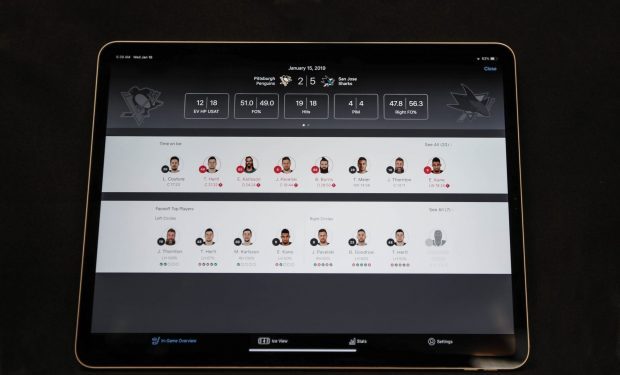 ORLANDO – Moneyball may have made a statistical approach to baseball a part of pop culture, but hockey is no different.

Statistics and advanced analytics can be found throughout the sport; whether it be in front offices, broadcasts, or even in discussion among fans. But now, the National Hockey League, which is headquartered in New York City is putting those numbers at the fingertips of its coaching staffs in real-time with its new Coaching Insights Application, which is powered by SAP HANA.

The software, which was designed in partnership with Germany-based SAP SE and California-based Apple Inc. and launched league-wide in February, provides over 60 different real-time statistics and metrics that can be accessed by coaching staffs during the game via iPads installed on every bench in every NHL stadium.

David Lehanksi, the senior vice-president of business development and global partnerships for the NHL, has been lauded around the sport for the technology he has helped bring into the league and was once again at the forefront of this newest technological advancement.

Lehanski says that the motivation for this program came about after some coaching staffs – particularly from approximately 12 unspecified teams – came to the league to request more be done with the already existing iPads on the benches (which at the time were only being used to provide video replay and highlights.) To provide them with the information they needed to best guide their team and the strategies they implement during games.

“The app really came out of the feedback that we got from our coaches. The video was great. But to really take it to the next level, we needed to figure out a way to get them the data right there in real-time,” said Lehanski.

At first, he said there was some pushback from some less analytically-inclined coaching staffs who believed that this tool could make their jobs unnecessarily more complicated, but eventually they all came around to realize the competitive edge this app could provide.

“What everybody wanted was competitive balance. They didn’t want the teams that maybe had more resources to have better technology and better access to data during a game than the team that is right on the other side of the bench, right?” he said. “They wanted everyone to have the same access to the same data through the same tool during the game. Our real goal was to maintain competitive balance and optimize decisionmaking for coaches joining the game.”

An additional motivation for the NHL, according to Lehanksi, was to provide a uniformity of statistics. He says this could even enhance the fan experience, as the same stats that front offices use will be the same stats being discussed in broadcasts and among fanbases; therefore lending an entirely new connection for the fans to the inner workings of the league.

In the future, they hope to have this technology provided to amateur leagues around the world so that operations like scouting will not only be more uniform around the world but also more efficient.

Through the NHL’s already existing partnership with SAP and Apple, which they used to create tools to enhance the fan experience, Lehanksi says they spent a lot of time as a team sitting down with coaching staffs from around the league to find out what they wanted to see in this app.

“So we then spent a good amount of time with SAP and some representatives from Apple meeting with the coaches to try and understand like, “What do you really want? What are the stats and metrics that you really need to have on the bench?’ And then we built the app with that level of insight.”

Once a prototype had been built, the NHL then brought together some of those coaching staffs again to walk them through how the app would work and exactly what would be available to them. And after some more tweaking, including adding the ability for coaches to set exactly which stats they wanted to see and how they would be represented in their interface, whether that be in a standard numerical fashion or in a more visual representation, they were finally ready to put it into play.

And Lehanski says he has been surprised by not only how willingly it has been adopted, but also by the feedback they have received about it.

“It really has been great. I can honestly say that I did not think we would be this far along with regard to the implementation. If you had asked me two years ago ‘Do you think we would be in the middle of the Stanley Cup Playoffs and you would have coaches and players grabbing iPads as soon as they come off the ice to look at data and video?’ I feel like that’s a tall order. We’d like it to happen, but I’m not so sure. And the fact that it is happening in every single arena for every single game with high levels of usage, we couldn’t be more excited about it. We think it’s sort of kind of going to be an impetus for other products and experiences that we’re going to build for our clubs and our fans.”

It has now been used for every single game that has been played – regular season and playoffs – since it launched in February. And with that usage, Lehansky says they will analyze how it is being used so that they can further improve it; something they are planning to do on a continuous basis.

Looking to the future, Lehanksi said that this app will allow them to implement player and puck-tracking technology that will then be leveraged to enhance the experience of the existing app; which they hope to have up and running by the 2019-2020 NHL season.

Buckley Smith’s travel and accommodations to cover SAPPHIRE NOW were paid for by SAP. This story was not reviewed externally before publication.

Buckley Smithhttps://www.itbusiness.ca
Staff writer for IT World Canada. Covering the world of technology as it applies to business. Buckley is an avid sports fan who loves travel, food, and music. Can be contacted at [email protected] or 416-290-2000.
Previous article
New OpenText content services to be integrated into SAP platforms
Next article
Hashtag Trending – Massive cryptocurrency theft, failing facial recognition, Uber’s IPO