Privacy Commissioner Jennifer Stoddart’soffice released 24recommendations today that it advised the site to address in order tomeet Canadian privacy guidelines. But it said Nexopia hasn’t adequatelyaddressed four of those recommendations involving the retention of users’personal information.

“We are addressing these unresolved issues in accordance with myauthorities under PIPEDA, which include the option of going to FederalCourt to seek to have the recommendations enforced,” Stoddart stated inthe news release. 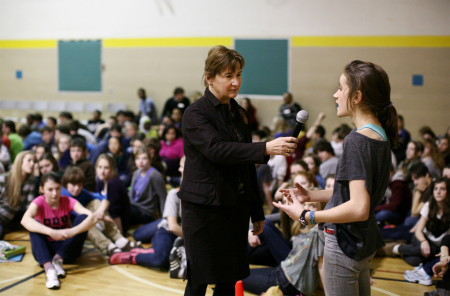 Stoddart, here at an Ottawa schoolin January, says youth sites should be more mindful of privacy.

Stoddart put a heavy emphasis on the last point, saying she askedNexopia to offer its users “a true delete option” to permanently taketheir personal data off the Nexopia site. Even after users select the‘delete account’ option, however, their data is still retained byNexopia forever, she said. According to Stoddart’s news release,Nexopia still hasn’t added a true delete option because it says thecost of implementing such a system is too high and it believes thatarchiving personal information indefinitely can be helpful for lawenforcement officials in some situations.

Youth privacy more pressing
Stoddart responded that there is no way to “justify wholesale andindefinitely retention of all records just in case there may be arequest at some point in time.”

Although the privacy commissioner lauded Nexopia for “good cooperation”in implementing 20 of its 24 suggestions, she also said “the fact thatthe site is targeted at younger peoplestrongly influenced our approachin this investigation.”

“Given that so many of Nexopia’s users are young, extra care is neededto ensure that they understand the site’s privacy practices,” Stoddartadded.

Founded in 2003, Edmonton-based Nexopia says it has 1.6 millionregistered users, half of them in Alberta and British Columbia. Morethan a third of its active users are between 13 and 18 years old,Stoddart’s office said. The probe into Nexopia — Stoddart’s first everof a youth oriented social networking site — was launched following acomplaint from the Ottawa-based Public Interest Advocacy Centre.