News flash: everyone is using their smartphone all the time

Smartphones have become integral to everyday life, and more consumers are using the devices for a wider variety of activities than ever before, according to new research from New York-based Fluent.

The people-centric marketing company published its fourth annual Devices and Demographics 2017 report on Jan. 18 and found that consumer use of mobile phones for online shopping, gaming, and social media dominates all other mediums.

The report is based off results from a Jan. 5 online survey of 2,773 randomly selected U.S. adults aged 18 and up.

When it comes to choosing between mobile apps or mobile websites, those surveyed used both at a fairly even rate (51.4 per cent and 48.6 per cent respectively). But that changes when you break down the results by age and gender, the report says.

“Women are much more likely than men (53.6 per cent vs. 43.8 per cent) to shop on mobile websites, while the opposite is true for mobile apps, where men make the majority of their smartphone purchases (56.2 per cent for men; 46.4 per cent for women),” Fluent explains.

The report adds that younger respondents between 18-24 and 25-34 years of age are much more likely to shop on mobile apps while older age groups, 45-54 and 55-plus, are more likely to make their smartphone purchases on mobile websites.

In terms of digital marketing for mobile shopping, product emails appear to be the best way of inciting mobile purchases, compared to text and push notifications. 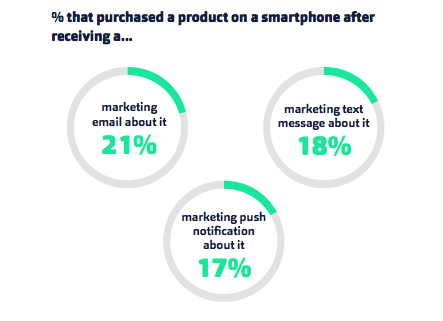 Overall, the smartphone rules: 55 per cent of respondents say they spent the majority of their time on smartphones in 2016 instead of desktop and laptop computers, which came in second at 13.7 per cent and third at 11.8 per cent, respectively.

But what do people actually do on their phones? According to Fluent, the most common activities for smartphones includes messaging (33.8 per cent), phone calls (20 per cent), and email (18.4 per cent), closely followed by social media at 13.2 per cent. This can be broken down even further, with most young adults preferring messaging and social media, while the older group tends to make phone calls at a greater rate.

In regards to apps, social media leads the way with 31.9 per cent of people spending their time on such apps, closely followed by gaming at 29.5 per cent and shopping at 20 per cent. 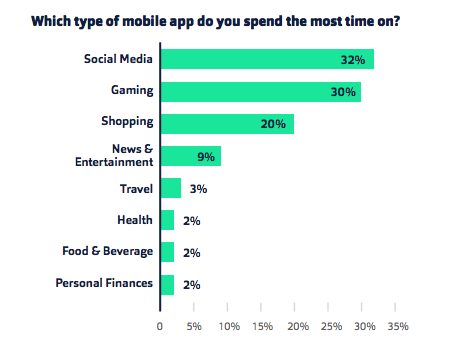 Gaming has also become a big category for app developers in recent years. The report found that 48 per cent of respondents had at least one game on their smartphone, noting that men are more likely to spend time on mobile gaming than women (32.5 per cent vs. 26 per cent), while women are much more likely to spend time on social media apps than men (37.4 per cent vs. 27.4 per cent).

Mandy Kovacshttp://www.itwc.ca
Mandy is a lineup editor at CTV News. A former staffer at IT World Canada, she's now contributing as a part-time podcast host on Hashtag Trending. She is a Carleton University journalism graduate with extensive experience in the B2B market. When not writing about tech, you can find her active on Twitter following political news and sports, and preparing for her future as a cat lady.
Previous article
Up, Periscope: TVO advances digital transformation via Twitter video platform
Next article
Report finds Canada’s big three offer near-identical mobile service [infographic]