A new iPhone app from Google Inc. guides small business owners through the process of producing and publishing a short video ad to YouTube.

YouTube Director for Business contains dozens of pre-baked templates that guide the user through shooting a video with step-by-step instructions. It then edits together the segments and combines them with music, on-screen text, and graphic elements to make a polished package ready for (hopefully) viral consumption. From there, you’re invited to use AdWords to distribute your video.

The whole idea, according to Google, is to help businesses that previously wouldn’t have considered a video ad instead be able to produce and publish one in less than 20 minutes. This gives them access to the more than one billion YouTube users, whom are spending more time watching YouTube every year.

A blog introducing the app from Google points to user Woody Lovell Jr., owner of L.A.-based The Barber Shop Club. After creating his own video ad with the app and promoting it with AdWords, the ad saw a 73 per cent increase in recall among YouTube viewers and a 56 per cent lift in brand awareness, according to an Adwords Brand Lift Study conducted by Google this month.

Templates in the app are organized by video types, and specific templates for different types of business categories are available. For example, there are templates for ecommerce, professional services, and real estate. Templates suggest that businesses try introducing their founders, feature their products, or have customers give testimonials. 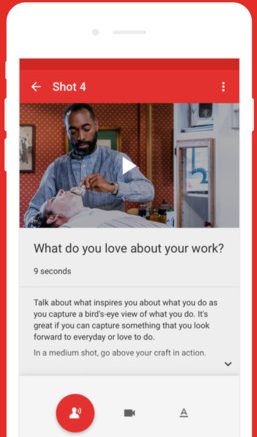 Another option for app developers is the YouTube Director automated video tool. With the assets already used for AdWords such as logos and screenshots, a video ad is created based on a template.

One other service available in some U.S. cities, but not in Canada, is YouTube Director onsite. This service sends a “professional filmmaker” to the business to help shoot a video, free of charge when businesses spend more than $150 to advertise on Youtube.

There’s no mention of when YouTube Director for Business will be available for Android devices.

theScore.com hops on board the chatbot train