Many Canadian companies, eager to harness social media to build brand and business, have no idea where to begin or what tools to use.

Newly launched NM Incite Canada says it can offer these companies the answers and assistance they so urgently need.

A joint venture between Nielsen Company and McKinsey & Company, NM Incite kicked off its Canadian operations earlier this month at a function in Toronto.

The firm, its executives say, will help corporate clients tap into the “customer engagement” potential of social media.

To that end, he said, his firm is bringing Neilsen’s BuzzMetrics offering into the Canadian market.

As its name suggests, BuzzMetrics is a set of applications and services that help companies access, analyze, and act upon consumer buzz about their brand and products on social media sites.

The tool uncovers and integrates insights from millions of blogs, social networks, groups, boards, and other community networking sites. 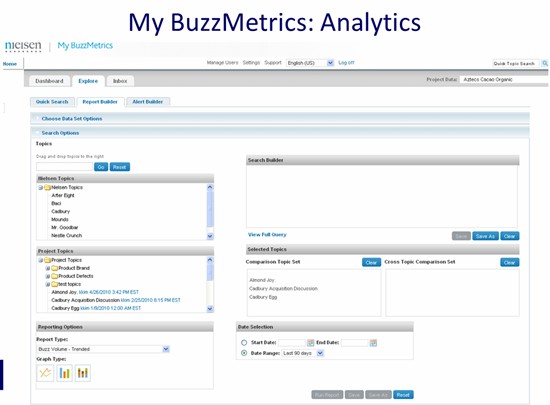 “You can then build brand advocacy programs based on these insights,” Budin said.

Two specific NM Incite product offerings being launched in Canada are My BuzzMetrics, a self-service dashboard, and a various analyst services — such as reports and consulting services — all grounded in social media.

My BuzzMetrics, Budin said, moves businesses beyond the “listening” and “measuring” phases to engaging directly with customers through a five-step workflow. 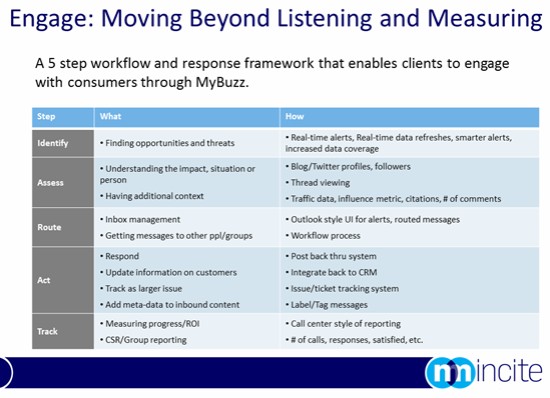 Such reporting is one way firms can measure the ROI of their Web 2.0 initiatives, Budin noted.  “There are others as well.”

For instance, he said, firms can track how much of an “offline boost” they’ve got from a social media campaign. This would include a traditional media pickup — coverage in newspapers, magazines, trade journals, radio and so on.

As a case in point, he cited the spectacular impact of the Old Spice ‘The man your man could smell like’ viral video campaign

In the course of the campaign, a 35-member team made around 185 videos starring NFL footballer Isaiah Mustafa. Many of these videos responded directly to people’s comments on Twitter and Facebook.

The “Old Spice Man” answered these questions and 183 of his video responses were posted on the Old Spice “I’m on the Internet” YouTube channel.

Collectively the video responses attracted more than 35 million page views. Today the Old Spice YouTube channel has become the No. 1 most subscribed sponsor channel of all time.

Besides accomplishing an incredible marketing coup, the campaign also had a dramatic impact on sales. The Neilsen Co. reported sales of Old Spice Body Wash jumped 55 per cent in three months. And in June of 2010 it rose 107 per cent. (Quoted in Brandweek). 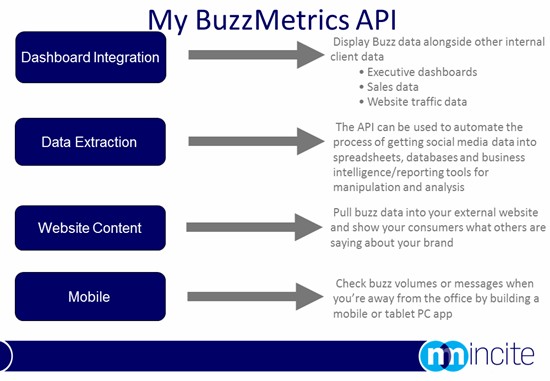 This can be accomplished by using a recent enhancement to the BuzzMetrics tool, dubbed ‘Engage.’

Budin explained how it works.

“Say I’m a customer service agent at a cable company and someone called Joe complains about his cable service on a popular social media forum. I can see [on my dashboard] that he’s from a particular city. So I retrieve data from my CRM system about all the Joe’s in that city who are our customers, and whittle the list down to the person who’s made a complaint.

“I then push Joe’s complaint on to the CRM system. So if he makes a phone call to the call centre tomorrow, the agent there knows exactly what his grievance is, and what action has already been taken. Whether Joe completed a survey online, whether his complaint came in via phone, or e-mail, a social media site … it’s all going to end up in the CRM system.”

Such a workflow, he said, helps agents engage with customers better, and resolve their issues quicker and more efficiently.

This is absolutely crucial in a fiercely competitive market with constantly shifting customer loyalties, according to another NM Incite exec.

He alluded to a recent Nielsen global online survey that reveals customers don’t easily forgive a bad experience. “While 80 per cent of customers say they are loyal to at least one company, only 31 per will remain loyal after a single bad experience,” Rampuria noted.

In such an environment, building a credible brand is a pre-requisite for survival, he said.

A business comes across as authentic, he said, when its products and services are as advertised, and its customers know they’re dealing with sincere people, who listen to and act promptly on feedback.

Joaquim P. Menezes
Previous articleDiaspora: Is it the social networking platform that will trump Facebook?
Next articleSix reasons Android is the right mobile choice for business