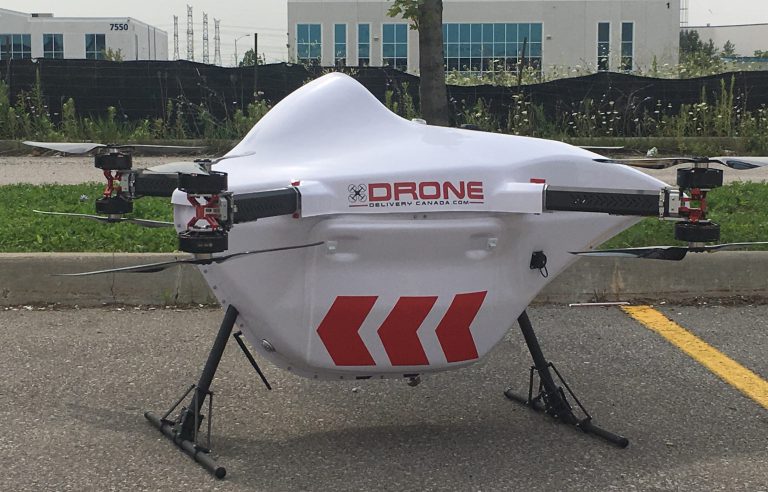 A drone that can haul up to 25 pounds as far as 60 kilometres is slated to begin test flights in Canada’s skies this week.

The Robin drone can deliver cargo in two different ways: It can simply land with the cargo on board, or it can use a tether to lower its payload from as high as 100 feet in the air. With the tether approach, the drone never even has to land before making its return flight.

Toronto-based DDC is the first commercial company to successfully conduct beyond visible line of sight (BVLOS) tests in Canada, having completed them in Foremost, Alta. in June 2016. Earlier this month, the company announced it had recruited former Canada Post CEO Deepak Chopra as a strategic advisor.

Yesterday, the company announced that it will be conducting a pilot project with Public Health Agency of Canada using drone deliveries as a way to improve access for blood-borne infection testing in remote communities. This will involve testing of a climate controlled cargo compartment on the drones.

Drone Delivery Canada also says it’s continuing work on a “Condor” drone that will be able to haul up to 400 pounds.

Here’s a video from the company explaining its depot-to-depot platform approach to getting cargo across the country:

Brian Jacksonhttp://www.itbusiness.ca
Editorial director of IT World Canada. Covering technology as it applies to business users. Multiple COPA award winner and now judge. Paddles a canoe as much as possible.
Previous articleHow Interac has kept up with the digital transformation-driven times
Next articleSalesforce appoints co-CEO

Building a better drone for a “workforce in the sky”