Astronaut: Moon, Mars and Beyond, is the title of the NASA-commissioned MMO set in the year 2035, when mankind has begun settling space. The game is expected to come out in playable beta-mode by December 2012. MMO video games are played on the Internet with players using personal computers, tablet devices, or game consoles such as the PlayStation 3, Xbox 360 or Wii. MMOs are capable of supporting hundreds or thousands of players simultaneously.

Project Whitecard Inc., a Winnipeg-based company specializing in virtual learning technology and Wisdom Tools, a simulation and game company in Bloomington, In., were the winning team picked by NASA to develop the game. Another Canadian company, Pug Pharm Productions Inc., has partnered with Project Whitecard to develop the vital gamification and online social engagement feature for the game.

The team beat out 20 other competitors in the contest sponsored by NASA’s Learning Technologies division. Their reward? A commercial license to build Astronaut: Moon, Mars and Beyond.

“I believe this is the first time ever that NASA is entrusting its data to private companies to develop an MMO game,” said Khal Shariff, CEO of Project Whitecard. “The level of accuracy in terms of images, simulations and background science in this game will be amazing.”

For instance, he said, many current games and movies about Mars does not take into account the radioactive atmosphere in Mars. “Movies depict astronauts in space suits running around on Mars, but in reality the radiation can kill people.”

Raising space cadets of the future

With the recent grounding of the Space Shuttle program, NASA hopes to keep the public fascination with space alive with the help of the MMO.

Players to assume the role of astronauts at the Arthur C. Clarke Astronaut Academy Station ins the year 2035. Players can chose from an array of characters that include astrobiologists, engineers, physicists and pilots. The game is set on the surface of Mars and the outer reaches of the solar system.

Because the game will be steeped in NASA technology and backed-up by data about space compiled by NASA through the years, Astronaut: Moon, Mars and Beyond could also be used as an educational aid that could inspire a generation of players that might want to pursue a career in the sciences or actually go on a space mission someday, said Shariff.

Other possibilities include, tying up the game to existing school curriculum. This is in fact one of the areas where Project Whitecard, a company of 12 to 15 people founded in 2008, excels.

Perhaps the best known products of Project Whitecard are RoboMath and RoboMath3. The games, on Mac and PC platforms, feature the voice of Canadian astronaut Julie Payette. RoboMath and RoboMath3 are focused on curriculum-specific math concepts at the garde 5/6 level and grade 9/10 level respectively. Payette guides students through several mission tasks, some of them including the use of mathematical formulas to move the Canadarm. The game package includes an educator kit for.

Shariff said more than 1 million Canadian students are currently using the game which is available in French and English.

The gamification of space

Gamification is the use of game design techniques and mechanics to solve problems or engage audiences. To include this feature in the NASA MMO, Project Whitecard partnered with Pug Pharm of Vancouver.

Quite simply, gamification is all about introducing some gaming qualities to everyday activities to make them more fun according to Steve Bocska, CEO Pug Pharm. The “badging system” in coffee store cards the cashier punches out for you each time you purchase a cup is an example of gamification. “Anticipation is built up until you hit that final purchase which entitles you to a free cup.” 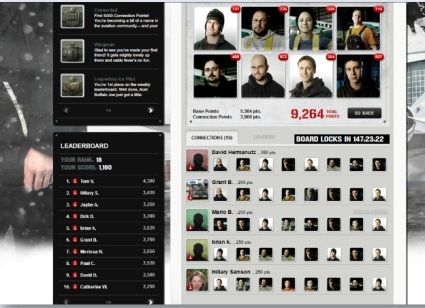 Many gaming companies excel in translating the badge system to online games, said Bocska, but Pug Pharm’s speciality is adding a social networking component to the mix as well. The company calls it its “collect, connect and reward” strategy.

One of the company’s more notable works is the social gaming suite for the reality TV series Ice Pilots NWT. Based on the idea of a scavenger hunt, Ice Pilot Air Hunt, has players navigating through the Ice Pilot Web site in search of specified items. These items are used to complete weekly gameboards. Each winning gameboard has a corresponding Ice Pilots prize and the top 10 players compete for the grad prize draw which us a trip to Yellowknife to experience the Ice Pilots lifestyle.

Bocska said, the game helps the TV series generate more traffic to the show’s site. Visitors also stay longer on the site but the game also feeds the appetite of visitors for engagement with likeminded viewers who enjoy the show. “The game has a component where players can compare with other players their hunt finds and their favourite pilots.”

Some version of this social interaction is what Pug Pharm will be creating for the NASA MMO project.

“The main idea is that visitor activity in the site is extended beyond just viewing images and reading articles. Visitors actually have an activity where they enjoy interacting with other visitors,” Bocska said.