Jaque Davison has used virtual world technology to build an Infosphere – a dense, 3D structure of information that allows anyone to easily access the research they need about Africa. Whether it’s pirate attacks off the coast of Somalia or the spread of AIDS across the continent, a simple glance through the window of Africa InfoSphere reveals the answer. Also read about how virtual worlds are helping Canadian businesses derive real world advantages.

The year of work expended to create this world has had some visually stunning results. – Page 1

Using virtual worlds to apply for a public sector job in the real world. – Page 3

Jaque Davison is a military man with two passions he indulges in his spare time – playing the harp and exploring virtual worlds.

Today he has combined those two interests to create an online portal that enables users to easily access information about Africa that’s presented in an interesting way.

With 27 years experience in 3D construction and virtual worlds . it was natural for Jaque to build an entire world around the instrument he loved to play – the harp.

It was a simple “world”, with signs pointing to information about harps on the Web, organized by colour and stacked one atop the other, in concentric circles around a sphere-shaped room.

The set up enabled anyone interested to quickly see a huge wealth of information available about the harp.

“I had a campus built with signs that pointed to subject-related Web links,” Davison says. “Before I knew it, there was a community of people coming in to use the world and also adding their own signs to resources I hadn’t found yet.”

That’s when an army buddy of Davison’s suggested taking the concept and applying it to other subject areas. The two turned their attention to Africa and the type of information that non-governmental organizations (NGOs) would need to better plan their work in the continent, and coordinate their efforts. The result was the Africa Infosphere, a densely organized and complex presentation of information in a virtual reality situation room.

“I’ve been in the army about 20 years and spent a lot of time in war rooms,” Davison says. “I’m familiar with trying to bring a lot of information to a decision maker, using a set of indications and warnings.”

Davison says his work on Africa Infosphere is not related to his role in the military, but is a project of his own volition.

Be that as it may, the year of work expended to create this world has had some visually stunning results. 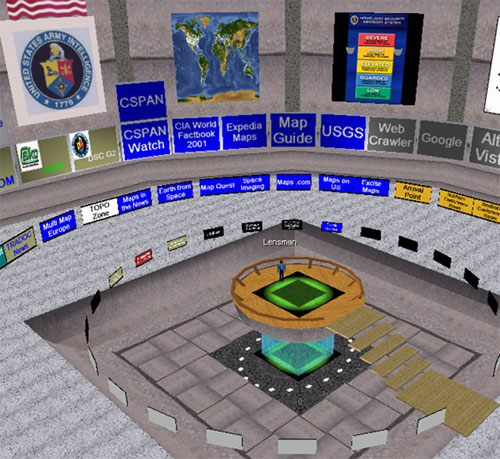 A series of situational rooms are home to signs that are stacked several layers high and several layers deep. In each room, a rainbow of background colours, text gradients and font styles show a finely tuned method of organization.

At the centre is a command platform, where users move their avatar around to take in the wealth of information presented by the room.

In one view, a user can determine the extent of HIV infection across the continent, or see the level of pirate activity along Somalia’s coast. The continent’s weather is visible in one section of the room, and in the other corner the state of Africa’s agricultural production is represented on a geographic map.

To pan from one subject are to another, a user simply has to shift their view using the left and right arrow keys, Davison explains.

“Looking through an avatar’s eyes is a bit like driving a tank, you’ve got a square window and no peripheral vision,” he says. “You can also move your avatar up and down to view different layers of information.”

This is a bit more effective at sharing information than your average Web browser, Davison says.

“Even if you give someone else your favourites list from Internet Explorer, if you’ve got over 100 in various different folders, I guarantee you it’s going to be a long time before anyone else can use that list,” he says. “In my virtual world you can give directions just like you would in the real world – you can tell them to look for the third row of blue signs, and the one with the green text.”

Activeworlds is a 3D virtual world system, much like Second Life. Users have 3D avatars that are visual representations of themselves, and move their avatars around a world that has been given set physical characteristics.

The usefulness of 3D modelling was well demonstrated by Bosch Rexroth Canada (BRC), an engineering firm that modernized the Welland Canal with the help of Autodesk Inventor. The 3D drawing program helped the firm avoid design errors when retrofitting 100-ton seaway doors from the 19th century with hydraulic mechanims.

Using 3D designs, BRC was able to cut the number of errors by 25 per cent and cut the amount of design time needed in half.

Unlike Second Life, Activeworlds can be completely owned and private.

So while everyone in Second Life is part of the same universe, Activeworlds has many different universes been created by various people or organizations. An Activeworlds server can be run in-house and behind the firewall, it doesn’t have to be public. 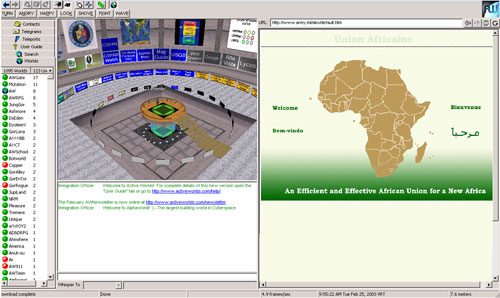 The browser also incorporates Internet Explorer technology so a user can view a standard 2D Web page while visiting an Activeworlds site. There’s also a contacts list that indicates presence, and the ability to view multiple angles of a world simultaneously. Users can talk one-on-one to other users or to everyone in a world at once.

“There’s a fundamental missing piece from the Web, and that’s interaction,” Davison says. “That’s what virtual reality is bringing about.”

Many organizations are tapping into virtual worlds as a useful platform for 3D interaction. The Ontario Public Service has an island in Second Life that allows potential recruits to try out several different career options. Virtual visitors can fight fires, perform CPR, or do a chemical test on water.

It’s a bid to try and woo those using virtual worlds to apply for a public sector job in the real world.

Davison hopes his Africa Infosphere will soon attract people from non-governmental or not-for profit outfits, and they’ll use it as a place to talk to each other and share information.

“You could conceivably save more lives,” he says. “Knowledge is power.”

Many visitors to the Infosphere have been from Africa so far. Another advantage to Activeworlds is that it caches information so that even low-bandwidth connections can interact in its various worlds. After an initially long loading time, even modem users will be able to keep up with broadband users.

So far Davison has been maintaining the Infosphere by himself. But he hopes its usefulness will strike a chord with the NGO community soon.

Brian Jacksonhttp://www.itbusiness.ca
Editorial director of IT World Canada. Covering technology as it applies to business users. Multiple COPA award winner and now judge. Paddles a canoe as much as possible.
Previous articleiPhone jailbreaking could be made legal by copyright court
Next articleDuo who made millions duping students indicted on spamming charges