Internet service providers, social sites and satirists appear to be in the cross hairs of the Canadian Independent Music Association (CIMA).

The national trade organization representing English-language Canadian companies in the music, sound recording and music-related industries, last week addressed the federal legislative committee on Bill C-11 and sought a series of amendments that would extend the proposed law’s powers.

“While Bill C- 11 does makes in-roads to modernize the Copyright Act, in regards to Canada’s obligations under international treaties, CIMA believes that some provisions of the bill will lead to significant problems for copyright owners in their efforts to protect their rights, determine the use of their works and to enjoy reasonable compensation for their intellectual property,” CIMA said in a statement.

Among CIMA’s proposed changes were:

Bill C-11 already has enough provisions to censor online speech, according to Dev Basu, president of Powered by Search, a search engine optimization firm. “The bill effectively aims to police the voice of the public, taking aim not only at user generated content drive sites (any social media site) or its users.”

“The fact that the proposed changes leave a huge deal of open-ended liability on the table is a huge concern and it is my sincere belief that such a bill should not pass,” Basu said.

By removing the “designed primarily” requirement the enabler provision would hit any site that enables infringement, according to Michael Geist, Canada Research Chair of Internet and E-commerce Law at the University of Ottawa. 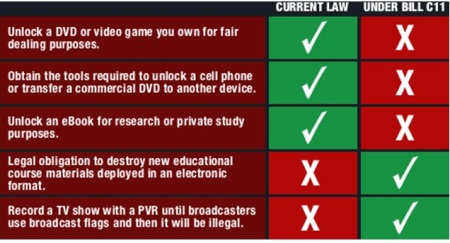 Graphic courtesy of the Canadian Coalition for Electronic Rights

“That covers just about anyone, since search engines, social media sites, and more can all be said to enable provision in some form,” Geist said in an interview. “There are six categories to consider, but as I pointed out last week, several of those might cover legitimate sites.”

In an earlier blog, he cited a six-part analysis to see whether the site is liable under the provision:

With the proposed amendments most sites can be said to enable infringement particularly if the sites allow users to post content or interact with the site. Google, YouTube, Facebook, Twitter, Tumblr and Pinterest are just a few that come to mind. However, Geist is also worried that new startups would be particularly vulnerable as the pending legal risk would probably scare away venture capitalist.

“The chilling effect on new entrants could be dramatic since the prospect of a lawsuit would hang in the air,” Geist told ITBusiness.

The Internet law professor also noted that the proposed extension of copyright term would freeze up the entrance of new music in the public domain for an additional two decades. This, he said, will keep an “incredible array” of works out of the public domain. “I think it will affect all Canadians, rather than the creation of new music.”

CIMA’s proposal to remove parody or satire from the coverage of fair dealing can create “a chilling effect on online speech,” Geist added.

“The government has rightly identified the need for expanding fair dealing, largely for the benefit of creators. It is surprising that a creator group that supposedly represents the interest of artists should come out against the reform,” he said.