With all the fuss about the Google Nexus One lately, you’d almost forget that Google’s Android OS comes loaded on other mobile devices too.

Then the Motorola Milestone comes along and you suddenly don’t feel so bad that Canada doesn’t officially have the Nexus One yet. (Google won’t sell it to you, but you can still make it work on Wind’s 3G network if you smuggle one across the border). The new smartphone offered up by Telus Mobility eliminates Nexus One envy with its Android 2.0 OS and matching many of the so-called “superphone” features.

My overall impression of the Milestone is that it’s a smartphone made for fastidious users. If you’re going to carry around this brick in your pocket, you’re not willing to sacrifice performance or quality of experience for a slightly sleeker form factor. It’s also an interesting window into where Google plans to take Android in the future.

Consumers can buy this hardware for $200 from Telus, subsidized by a three-year contract. Without contract, it’ll set you back $600.

Milestone at a glance 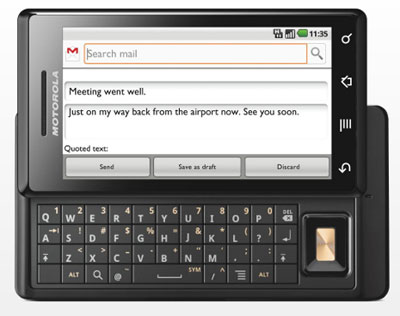 The first thing my friends will point out about this phone is its size. Most people seem taken back by its length and heft. It’s an easy observation to make – the Milestone’s screen is a half-inch larger than the iPhone’s, and it does have some weight to it.

But the phone is very slim for a QWERTY slider. In fact, Motorola is calling it the thinnest QWERTY slider on the market. That gives the phone a compact feel, and it is easy to slide into your pants pocket or belt holster.

To slide out the keyboard, you rotate the phone 90 degrees counter-clockwise and push upwards on the screen. The hinge feels very secure, and there’s enough friction to prevent it from sliding too quickly.

The keyboard itself I found almost too large. I was stretching my thumb muscles to reach across and hit certain keys. Also, the keys seem a bit flat and it can be hard to find individual buttons as a result. It still beats a touch screen keyboard, hands down.

There’s also a direction pad with a selection button to the right of the keyboard. Users who don’t want to put finger prints on their shiny screens can navigate around with this.

Google’s Android 2.0 offers a simple and aesthetically pleasing approach to navigating the features on your phone.

The home screen offers a large Google search bar that searches not just the Web, but all the content on your phone too – including contacts and past messages. Underneath that bar lies your core application icons. You slide up a tab at the bottom of the screen to reveal all of your applications.

A task bar along the top of the screen is a persistent feature across all screens. It notifies you of new e-mails, Tweets, calendar alerts and all the typical network and battery information next to the clock. Users slide it down to see a list of notifications, and can either dive into an item or clear the list.

The home screen is customizable. You just have to press and hold an icon in the apps window to bring it to the home screen and place it. You can also have more than one home screen, and slide back and forth between multiple pages of your favourite icons.

The Milestone does support multi-touch, but it’s not as prevalent in all the apps in the same way as on the iPhone. For example, you can pinch and pry your way around the Web browser with ease, but when using Google Maps, you’ll be clicking magnifying glass icons to zoom in and out.

Some smartphone enthusiasts trump the fact that the iPhone’s App Store offers much more choice than its competitors. It’s true that Android Market came after the Apple App Store, and that it has one-tenth the number of applications, but all the crucial ones are there, and a few gems not to be found elsewhere.

Office workers will be able to do some work on the go with the free version of Documents To Go, and social media nuts will appreciate the apps for Twitter, Facebook and Foursquare. But there are some proprietary Google apps that might make even iPhone owners envious.

Google Goggles for example is a visual search engine that takes a photo, scans it, and searches Google for results. This app is very much in beta, but I had some success using it on logos, DVD covers, book and magazine covers, and text. I could imagine this being very useful in a shopping scenario to answer questions about a product.

Also, Google Maps is just better on Android. It can do turn-by-turn directions when you’re driving, and offers a compass mode combined with Streetview that makes it a very useful road navigation tool, free of charge. Telus is offering a free car mount with the purchase of the Milestone, and this is a good way to make use of it.

Android works really well if you have a Google account already. You merely punch in your login credentials and the phone starts pulling in your information from the Web. Your calendar and contacts are kept in sync, and Gmail comes with push notifications.

But if you’re not cool with handing all of your personal information to Google, then you can’t use this phone. If you don’t like the idea of having your e-mail, contacts, calendar, and more online in the cloud, then this isn’t the phone for you.

For those comfortable with living in the clouds, this phone is a little piece of heaven. It does all the communications you want, can be used to keep productive on the go, and is a very rich and capable multimedia device. If you don’t mind the extra-large size of the device, then you’ll have lots of fun with this phone, and get lots of work done too.

In the future, it will be interesting to see if Google continues to provide more proprietary apps and features to the Android OS. It might provide them an important point of distinction against the iPhone, which has such a plethora of apps at its disposal.