If you consider yourself the ultimate social media junkie, Motorola may have the smartphone for you.

The Backflip offered up on the Telus Mobility network is one of three Motorola smartphones on the market to offer the new Motoblur feature. It’s the latest social media aggregator that saves mobile users from loading a myriad of different applications to keep in touch with friends and update various statuses. 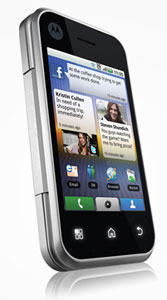 The device also enhances the mobile experience by integrating social media services into your phone. Contacts have their latest photos and status messages displayed when they call, you have several sharing options for the pictures you take, and Google’s services are built right in thanks to the Android OS.

Motorola Cliq XT easy to use and great for social media

The capability of Backflip with Motoblur to stream in so much information can be a double-edged sword — you’ll either feel enthralled riding the crest of a social media wave, or entrapped by a deluge of trivial messages.

The Backflip’s name comes from its unique form factor. Instead of the keyboard sliding out from underneath the screen, it faces outwards on the back and a hinge on the screen swivels it into position for typing. At first, I thought the form factor was just a gimmick to set this smartphone apart in a crowded market — but it actually turns out to be both convenient and fun to use. 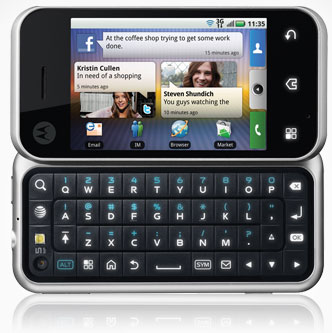 It’s easy to grab the right side of the touch screen with your thumb and flip it open with one hand. This activates the screen immediately and unlocks it for immediate access. The keys are locked when tucked behind the screen, so there’s reduced risk of pocket texting.

The form factor also allows Motorola to have a nice, large QWERTY key pad on the device. Typing on this phone is top-notch, as the buttons are large and square, with a slightly raised feel.

As a result of the unique shape, it’s a bit thicker than some slider phones. It is also a little heavier. There are some familiar features, such as a volume rocker button, 3.5 mm stereo headset jack, and a camera button along the side of the device.

Social networks at your fingertips

Motorola’s selling feature for the Backflip is Motoblur, a social networking interface that stores your log-in information and then displays incoming messages from your accounts in a unified Inbox, and in widgets on your home screen. It also allows you to update all your status messages simultaneously, or one at a time.

Tapping the “Happenings” widget on your home screen allows you to browse through the latest messages. A small icon indicates the social network of origin, and your friend’s picture and screen name are also displayed.

Social network information is also tied into your Contacts list, so when friends call you, you’ll see a picture scraped from the Web, and their latest status update. Diving into your contacts organizer, you’ll also be able to access an entire history of conversations that took place across social several social networks, SMS, and so on.

Social media managers and community organizers should find these kinds of features useful. But Motoblur could have gone even further in making the ideal social networking device by allowing users to add multiple accounts for a social network. This would also be a boon for social media marketers who often juggle several accounts at once. But sadly you are limited to using just one active Facebook or Twitter account at a time.

Those not interested in reading hundreds of status updates as they stream into the phone’s home screen will likely just feel overwhelmed. The feature can be turned off, or the widget hidden.

The Backflip’s 5 MP camera is one of the best performing smartphone cameras I’ve seen. It takes good pictures both indoors and outdoors, with good colours, a crisp image aided by autofocus, and even a small flash for darker situations. 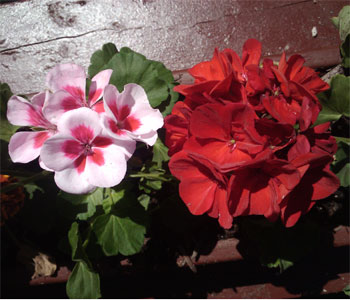 Snapped with the Backflip’s camera.

Social media fiends with a streak of vanity will marvel at how easy it is to take a self-portrait. Because the camera is on the keyboard that flips towards the user and the same side as the screen, there’s no need to guess whether you’re in the frame or not. Once you’ve snapped an acceptable mug shot, you can easily share via e-mail and online photo sites.

But Motoblur didn’t seem to have built-in uploads to either Twitter or Facebook, which is a drawback.

The 3.5 mm stereo headphone jack and a music playing widget make this a pretty good music phone. But Android still lacks the slick iTunes interface offered by Apple to get music on and off the device. Still, loading music to the SD card via a USB cable and Windows Explorer is easy enough.

Video looks great on the high-resolution screen. Watching YouTube movies in the native app is a fine experience, and the Android phone can play various movie formats stored to the miniSD card.

Backflip specs at a glance

Brian Jacksonhttp://www.itbusiness.ca
Editorial director of IT World Canada. Covering technology as it applies to business users. Multiple COPA award winner and now judge. Paddles a canoe as much as possible.
Previous articleFacebook, YouTube banned by Pakistan for
Next articleHow to prevent bad guys from getting at your personal Google data