We set out to review the top 10 business smartphones for 2014 so you know what device is right to buy for you. While some of devices didn’t quite make the cut to our top 10, we felt they were worth a series of five shorter reviews. We start here with the Moto X (2014).

Last year Motorola released the Moto X, the first phone born as a result of being owned by Google Inc. (briefly, since they are now owned by Lenovo). It was one of the best Android phones of 2013 and for 2014 Motorola has followed it up with a new and improved version of this flagship device… also called the Moto X. 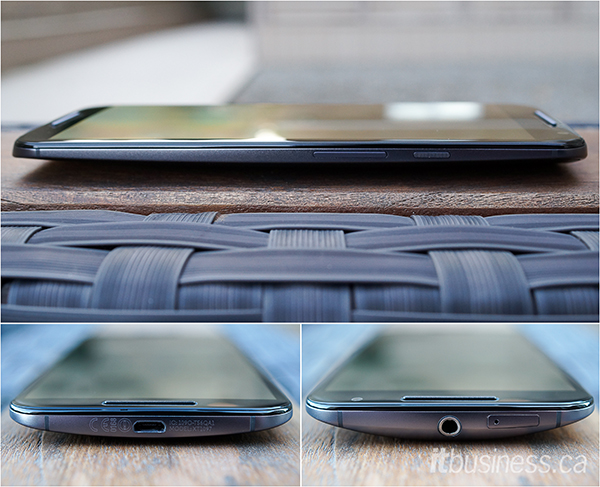 The Moto X is well designed and is made from premium materials, despite being a little less expensive that some of its competition. It has attractive metal sides and a plastic or wooden (non-removable back). It’s a good shape and size with minimal bezel round its 5.2-inch screen, making it comfortable to hold and usable with one hand, despite it being bigger than the first generation Moto X.

It has a crisp (423 PPI) 1080p Super AMOLED screen and is has a powerful 2.5 GHz quad-core Snapdragon 801 SoC (system on a chip). Its 13 MP camera is capable of taking good pictures in the day (you can see a sample below) and it supports the latest Wi-Fi standard with 802.11ac. It supports seven LTE bands, which while not as many as some other phones, still enough that it can be used worldwide.

The Moto X runs stock Android KitKat (4.4.4) with a few light (and very useful) Motorola customizations. It should also be getting an upgrade to the latest version of Android, Lollipop (5.0), sooner than other non-Nexus phones (though Motorola Canada has not specified as to exactly when). 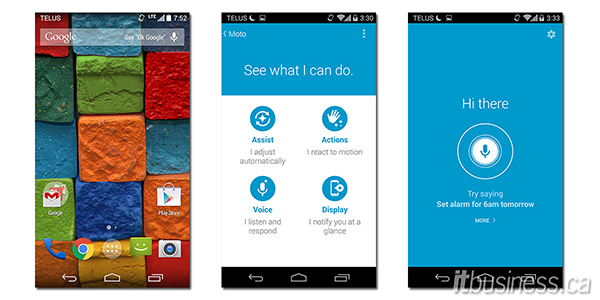 Assist configures the Moto X to automatically apply user-defined settings based on specific criteria — for example, it can be set to silence the phone when you are in a meeting.

Moto Voice allows you to use a phrase (default is ‘OK Moto X’) to give the phone voice commands. The genius part is that the X is always listening, even when the screen is off, so you do not have to push a button to activate this feature. You can use it to send a text, search Google, set an appointment, get directions and a lot more. 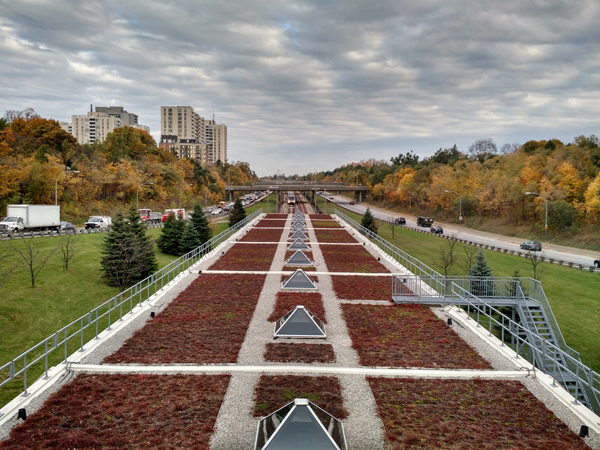 The Moto X is only available in Canada in black and white with the Bamboo back. In other parts of the world, including the US and UK, it can be customized and ordered on the Motorola Moto Maker site in a choice of 17 colours, four types of leather, and four types of wood. Also, the Canadian model only has 16 GB of storage, and there is no micro SD slot. In other parts of the world, there is a 32 GB model too.

The Moto X’s screen though crisp and a good size does not have a very high maximum brightness, so doesn’t work as well outdoors. It also displays over-saturated unnatural looking colours typical of older AMOLED technology. The 13 MP camera uses an older sensor and does not perform very well in low light, and the 2,300 mAh battery is too small which compromises battery life when compared to other 2014 phones. Overall, to get the price down to make it cheaper than its competition, Motorola did have to make some disappointing cuts in the hardware.

Thankfully, on the software side there isn’t that anything to dislike. This device is only available to subscribers on Telus or Wind. 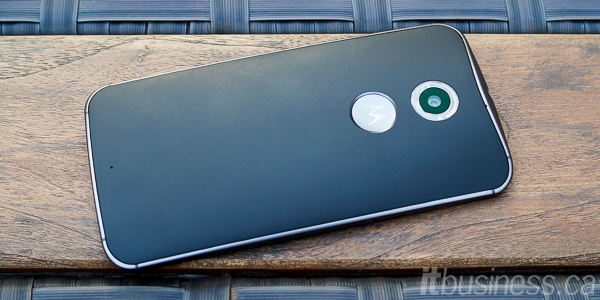 The Moto X (2014) is nicely designed and made, and has good performance (apart from battery life). Motorola’s customizations to stock Android are great, and it is priced well for a high-end Android phone when compared to its competition. Unfortunately, Motorola made a few too many compromises in the hardware to bring the price down so while the Moto X (2014) is still a good choice for business users, it didn’t quite make the cut to be one of our ‘Top 10 smartphones for business.‘

Security and risk management, application and integration strategies, and...