Most IT professionals expect automation technologies to take over by 2020: new survey

IT professionals are bracing themselves for increased automation in the workplace, according to a new global study by enterprise IT services provider BMC.

The study found that 94 per cent of the 650 IT decision makers surveyed expect automation to spread to all areas of business by 2020, with nine out of 10 respondents agreeing that it is necessary for new revenue, competitive advantage, and in order to keep pace with the speed of innovation. 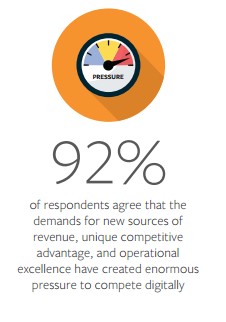 In fact, 73 per cent of IT professionals believe that businesses that don’t embrace IT automation within the next five years will not be around in 10. Majority of survey respondents highlight containerization, workload automation/scheduling and DevOps, as priority areas for investment in the next two years.

“As companies continue to incorporate hybrid cloud capabilities across the digital enterprise, they are challenged by the complexity of managing workloads across on premises, public and private clouds,” Gur Steif, president of digital business automation at BMC, says in a May 9 press release. “IT teams must be able to manage the customer value chain in spite of decentralized usage of cloud services. This is requiring a new level of IT automation to adapt to the challenges posed by increasingly diverse infrastructure, disparate data, and accelerated applications – the critical components of digital business.”

However, there are challenges to such massive digital transformation. More than two-thirds (67 per cent) of those surveyed point to a lack of necessary budget as the biggest hurdle to overcome, followed by a lack of time (51 per cent), and a lack of skills (44 per cent).

Conflicting objectives within a business is also an issue, 42 per cent of CIOs report, with 32 per cent expressing the need for tighter internal organizational alignment.

“BMC believes that without taking a new approach to IT automation, companies will not be able to overcome the budget, skills, and time constraint challenges identified by the survey respondents,” Steif continues. “Only through new digital-first technologies with automation solutions that support hybrid multi-clouds, will CIOs enable their companies to innovate, transform, and accelerate growth by aggressively pursuing a digital agenda that differentiates them from their competitors.”

That being said, the survey results indicate that majority of IT decision makers (88 per cent) believe they are empowered to deliver the required IT innovation to bridge this gap and drive their business’ digital transformation, and 77 per cent approve of what their business is doing to prepare and train the workforce with greater automation skills.

The study says that respondents in the US are most confident they’ll be able to deliver IT innovation (97 per cent), followed by those in Mexico and Spain (98 and 94 per cent respectively).

Mandy Kovacshttp://www.itwc.ca
Mandy is a lineup editor at CTV News. A former staffer at IT World Canada, she's now contributing as a part-time podcast host on Hashtag Trending. She is a Carleton University journalism graduate with extensive experience in the B2B market. When not writing about tech, you can find her active on Twitter following political news and sports, and preparing for her future as a cat lady.
Previous article
Canadians believe connected technologies are the future of healthcare: new report
Next article
The Business Leadership Podcast: Chris Zacharias, CEO at Imgix