The Canadian shopper is back – well sort of.

After giving retailers a chilly Holiday season in 2008 and 2009, as many as 90 per cent of consumers are expected to spend an average of $602 on Christmas gifts this year (a modest six per cent increase over what they spent last year), according to a survey by Maritz Canada Inc. a research and marketing communications firm.

Shoppers that will be fighting for parking space a couple of weeks from now might not believe it, but a survey commissioned by PayPal Canada suggests that more than half of Canadians will be staying away from malls this year and do their shopping online. 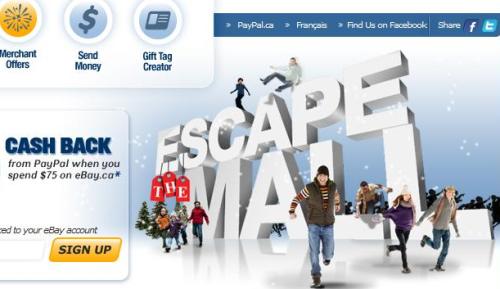 Based on online survey by Ipsos Reid for PayPal of some 1036 Canadians, 54 per cent of shoppers will avoid the holiday squeeze at malls this year and do some of their shopping on the Internet.

Maritz Canada sees a “modest year-over-year growth” in online shopping. Its survey indicates that 11 per cent of Canadians will make a purchase online this year compared to online nine per cent in 2009.

Escape from the mall

“Finding that elusive parking spot, walking through crowds and standing in line are all very inconvenient for many shoppers. Canadians want to escape the mall,” said Nicky Mezo, head of marketing for PayPal Canada.

The online payment company which is a part of popular online auction site eBay, recently launched a microsite www.paypal.ca/escapethemall. The site aims to help Canadians find holiday deals with some Canadian online retailers. The site will also feature tips on saving money, saving time and how to safely shop online.

The average consumer looks forward to taking five trips to the mall and spending at least 11 hours shopping for family and friends, Mezo said.

The biggest shopping peeves among Canadians are:

Mezo said many time-crunched Canadians are finding that online shopping offers many advantages over driving to stores or shopping malls:

She said technology is also driving adoption of online shopping. Online and mobile payment methods are encouraging many shoppers to do their Web shopping via smartphones, according to Mezo.

“PayPal estimates that it receives at least one mobile payment transaction per minute in Canada,” she said.

Show ticket retailers such as Cineplex have discovered that smartphones are an ideal device for consumers to purchase tickets, Mezo adds. “Consumers carry the device with them all the time and they can make online ticket purchases when they walk by a movie house.”

Technology manufacturers such as Dell and electronics stores like Best Buy have also adopted mobile retail, she said.

Online retailers who provide incentives to consumers will capture the greatest proportion of online shopping dollars in 2010, according to Rob Daniel, managing director for Maritz Research Canada.

“For example, successful online retailers offer free gifts or free shipping with minimum purchases; and in some cases, the shipping fee is completely waived,” said Daniel. “Customers expect to be delighted with great customer experience digitally, as well as in the store.”

Shopping south of the border

Whether shopping is done online or offline, credit cards will remain the payment method of choice, according to Maritz Canada. As many as 43 per cent of consumers will use their credit card this year, up from 34 per cent in 2009, the company’s survey indicates.

Loyalty programs often determine the choice of payment method. One half of Canadians agree that hey will chose how to they pay for purchases based on what method will give them the most loyalty points.

“Canadians are very aware of loyalty benefits and many will see the holiday spending as the perfect time to collect points from their favourite programs or redeem for desired rewards,” said Daniel.

With a stronger dollar, more Canadians have indicated a desire to shop south of the border for Christmas gifts. Sixteen per cent of Canadians intend to travel to the U.S. (up from 11 per cent in 2009) for their shopping.

Better prices for similar products and services (59 per cent) are the leading reason Canadians want to hit the U.S. malls, followed by being able to purchase goods and services not available in Canada (48 per cent).

According to the Maritz survey, Canadians are comfortable buying gifts made outside of Canada. Seventy-six per cent of respondents said that have no worries about where the Christmas gifts they buy are made.

Nestor Arellano
Previous article
How to set up a remote desktop connection via your iPad – for free
Next article
Video Rewind: PayPal’s launch of Website Payments Pro service