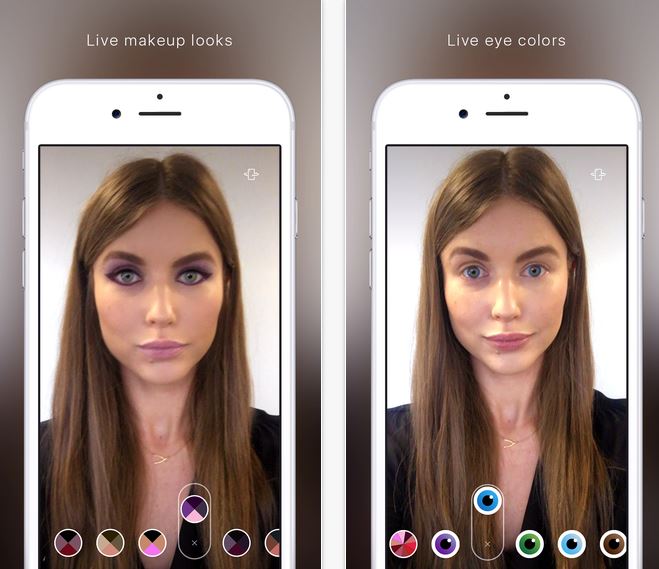 Toronto-based startup ModiFace has a new solution for anyone who’s ever wanted to instantly try on dozens of lipsticks, blushes, and eye-shadows – and wear them virtually while chatting online.

Launched Monday at TechCrunch Disrupt London and available immediately, the ModiFace Live app for iPhone and iPad is an augmented reality app that lets users see a reflection of themselves with makeup, contact lenses, skin-enhancement, emoji, and teeth whitening as a real-time 3D video effect that responds to their movements.

The new app builds on ModiFace’s previous 2D apps that were able to apply effects when the user faces the camera directly.

According to ModiFace CEO Parham Aarabi, ModiFace Live lets users play with the most popular 2D effects from previous versions and use them in 3D. He also noted there are “hidden surprises when users interact with them – such as kissing to change lip color or raising eyebrows to change eye color.”

ModiFace built this app using its patented technology and more than a decade’s worth of research. The company’s technology is behind more than 150 custom apps for beauty brands such as Allergan, Procter and Gamble, L’Oreal, Unilever, Yves Rocher and Sephora.

Some people object to the obligation or necessity to wear makeup (and this sort of critique has lead to movements like #nomakeup and No Makeup November taking off on social media), while others find it to be an effective form of personal expression. For that group, ModiFace Live lets them see how they look with various products and procedures before committing to anything – or even skip their makeup routine when hopping on a video chat.

David Hamiltonhttp://davidihamilton.com/
As a journalist, I delve into topics where technology and society collide. I’ve written for Canadian newspaper The National Post, and posted more than 3,000 articles on technology related to the Internet as a staff writer for trade publication the Web Host Industry Review. And I host and produce a podcast called Techish.
Previous articleGigabit fibre could be the key enabler for the Internet of Things in Canada
Next articleIoT holds great promise for cities, but don’t spy on people