When Scott Valentine is making a pitch for his company’s video streaming technology, he likes to recount his tribulations as a teenager with cassette tapes.

“The music sounded good, but I could only play them on one device. I was paying for the content but I got stuck with the packaging as well.”

This is essentially the challenge many TV broadcast stations are facing as they continue to lose viewers to online video, according to the vice president of MoboVivo Inc., a Calgary-based video streaming company. The firm claims to be the first Canadian company to legitimately stream TV programs over the Internet.

With more than 19.2 million users, the Internet is now the third most popular media of choice for the average Canadian. Canadians are tossing away the TV remote and reaching for the mouse, according to a recent survey by comScore Media Metrix, which indicates that 88 per cent of Canadians with access to the Internet watched online videos during the month of January. Canadians watched 3.1 billion videos (half of them from popular video sharing Google site, YouTube) for that period, according to the survey.

The numbers are only bound to grow, but people will also increasingly turn to mobile devices to get their video fix, according to Valentine. The days of sitting in front of a giant box to watch a program are gone he said. “Today young people want their video wherever they are. And that means being able to watch it from a laptop, iPod or other mobile device.”

Back in 2005, the company released two licensed TV shows to Internet viewers. Today the Calgary start-up has a library of 26,000 TV episodes and licenses shows such as The Tudors and CBC’s The Hour plus a host of specialty channel productions and niche products. The company licenses and distributes television shows, movies and music for delivery on portable devices such as Apple TV, laptops, iPods Nintendo Wii, XBox, iPhone, or Sony PSP. MoboVivo charges $2 to $3 per download and as much as 60 to 70 per cent of its customers use an iPod or iPhone to view their video. 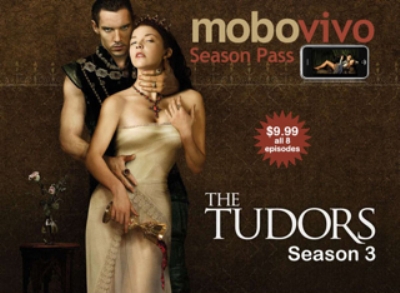 In April 2008, MoboVivo video streaming application was ranked No 1 Apple App Store application when it hit 10,000 downloads a day. MoboVivo claims to be number three behind iTunes and Amazon in TV downloads.

“Our business model is paid download. We sell to people who want to avoid ads or want to watch a TV show they missed the night before because they were doing something else,” said Valentine.

Trevor Doerksen, the company’s CEO says the MoboVivo’s download technology allows viewers to “take the video with them to the swimming pool or an airplane trip.”

He said many TV stations are also battling the online onslaught by offering free online streams from network Websites. Viewers can also purchase entire series seasons from stores and use software to convert the programs for viewing on their iPods.

However, the business model is not sustainable because of the high cost of bandwidth, according to Doerksen. “Free Web streaming ends up becoming a heavy expense to the content publisher.”

“A station’s bandwidth bill will end up costing tens of millions of dollars. Each time someone clicks on their screen for a free stream it will cost the content publisher $1.50,” he said.

MoboVivo could be a cheaper alternative for the networks, according to Valentine. “Numerous surveys indicate that people are willing to pay for advertising free downloads. Rather than develop their own streaming technology and spend for bandwidth they can license the shows to us and use our infrastructure to deliver content to viewers.”

Making money out or video streaming rather than technology is the major challenge for many streaming providers and networks, according to one Toronto-based technology analyst.

“The technology’s performance has reached a point where the main question now is customer readiness and acceptance,” said Krista Napier, senior analyst on Canadian competitive intelligence and emerging technology for IDC Canada.

The 10 companies in the report were:

“MoboVivo is rapidly positioning itself as a technology provider that enables video viewing regardless of what device the user has,” she said.

She agrees that the paid download would be a viable option for networks seeking to jump on the online viewing bandwagon.

“With companies like MoboVivo, networks will be able to catch more viewer eyeballs wherever they are, be it laptop or iPod,” Napier said.