MISSISSAUGA, ON – The Greater Toronto Area’s largest suburb – or its traffic department, at least – is moving ahead in the digital transformation game.

While its larger, more well-known neighbour organizes a working group to define the concept of “smart city,” Mississauga has been busy implementing a $16.2 million Advanced Transportation Management System (ATMS) that will boast 150 traffic monitoring cameras and 769 connected traffic lights when it rolls out in 2020, city staff told the media on Tuesday.

“Our existing system was almost 30 years old and at the end of its useful life,” Mississauga director of works, operations, and maintenance Mickey Frost explained to ITBusiness.ca. “We needed to replace it with something more robust that would allow us to actively manage our transportation network, communicate with other agencies, and disseminate information to the public and emergency service vehicles.”

The centre holding the Advanced Traffic Management System (ATMS) resembles the control rooms of futuristic techno-thrillers like 24 or Enemy of the State. Fifteen interconnected monitors towering above the dozen or so cubicles form the traffic control centre, from which staff monitor and manage conditions across the city. From here they can view current traffic overlaid on satellite imagery; real-time lists of intersections and their present conditions; camera feeds from the Ontario Ministry of Transportation’s website; and video feeds from the Weather Network and CP24 for a snapshot of what’s happening around the Greater Toronto Area.

More importantly, they can use the Intelligent Networks system known as iNet, supplied by Parsons Corp., to monitor the city’s intersections and adjust their traffic signal timing. Thus far, approximately 120 intersections out of 769 have been converted and 38 traffic monitoring cameras, all of which include remote movement capabilities, have been installed since field deployment transitions began in December.

The project’s technical leaders, including Frost, City of Mississauga CIO Shawn Slack, were the first to admit it’s far from a walk in the park, however.

“It’s like renovating a house while living in it,” Slack said.

Traffic management manager Al Sousa agreed. “We have an old system we need to keep operating while the new system is in production.”

“And make it seamless to the public,” Frost added. 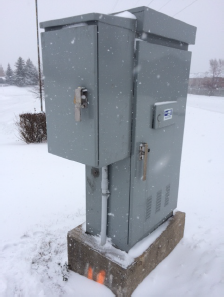 To connect a new traffic system of such massive scale to the Internet, the city of Mississauga is leveraging both its private wireless network and private fibre network – the result of an earlier project, in collaboration with other GTA-based neighbours, that installed more than 700 kilometres of fibre throughout the city – to replace the outdated controller units (right) at more than 750 intersections with their more modern counterparts (below), Slack said.

Naturally, such a massive undertaking must be completed in stages, Slack said, and so the city’s ATMS has been underway for quite some time, with stage one – the traffic control centre – being completed in June 2014 and the video wall being installed in fall 2015.

“For an advanced traffic system to work, you need real-time access to information and data,” Slack said.

Once installed, the new traffic control system will be scalable, designed to accommodate future modules and technology advancements such as traveller information; integrate with city transit and emergency services, giving them both traffic signal priority; and easily provide information to both the provincial Ministry of Transportation and neighbouring municipalities; in addition to allowing staff to proactively manage traffic signals. The city also plans to begin piloting new radar technology designed to detect vehicles, bicycles and pedestrians.

“We’re cautious with deployment,” traffic management manager Sousa emphasized. “We’re dealing with traffic signals, so we wanted to make sure it was done right.

“Staff were very diligent in making sure that our work processes were completed in flowcharts so we didn’t mess things up, and before we did the full deployment and rollout we did a 30-intersection pilot to learn the market stakes,” he continued.

As a fifth step, city staff have simply promised themselves not to rest on their laurels, and to explore future ATMS-related initiatives.

“This initiative is just another example of Mississauga’s leadership in building a smart city,” Slack said.

Eric Emin Wood
Former editor of ITBusiness.ca turned consultant with public relations firm Porter Novelli. When not writing for the tech industry enjoys photography, movies, travelling, the Oxford comma, and will talk your ear off about animation if you give him an opening.
Previous article
6 types of misleading ads, sites, and scammers Google took down last year
Next article
How AI is disrupting compensation claims when your flight gets disrupted