The boon and bane of most social networks is that one’s posts and activities are visible to a vast and often unintended audience. It’s a godsend to Cloud-based extroverts, but not such a welcome feature for businesses engaged in projects that require a certain amount of discretion.

Enter Minigroup, an online collaboration site developed by Calgary-based Minigroup Inc. The site enables users to create a group page where members can share files, schedules and events. But it doesn’t end there Minigroup also promises that all content is “private and presented only to members of that group.”

Minigroup actually started out as a sort of Facebook-alternative, but quickly morphed into a business tool, according to Chris Niecker, co-founder of the company.

“The site was supposed to be an alternative to social networks with a twist. Minigroup allows users to share posts with only those that they want to share it with,” said Niecker. However, during the beta testing last year, the company found that a lot of entrepreneurs, professionals and freelancers were using Minigroup for business purposes.

“People were using it to share project ideas, assignment details and other business-related stuff that they would normally not post on a social network or public site,” said Niecker.

Minigroup provides users with a place to create a Web-based group. A group can consist of an individual or up to 500 people. There is no limit to the number of groups a user can set up. The site has an attractive, streamlined interface and offers up to 100 GB of online storage space. 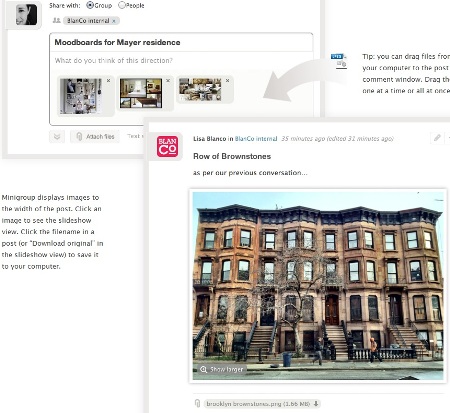 Group members can post messages, videos, and music or embed photographs and images on their page. The group page can be used to share files and schedule group-related events and activities. Group members can access an activity feed on their group page to keep up-to-date on developments.

The user can also invite group members (including those from other groups or people who are not members of a group). However, all content in a group page is private and is presented only to members of that group. Furthermore, group members cannot see what groups each user belongs to.

Users are able to edit posts but Minigroup is also considering adding a feature which facilitates file editing.

During its beta stage in March last year, Minigroup registration was offered for free. Today the site offered the following paid packages:

A lot of the current Minigroup users tend to be artists, photographers, and videographers sharing project information with their clients and collaborators. However, there are also some educators who use Minigroup to conduct courses with students as well as not-for-profit groups who use the tool to coordinate activities among their members.

The site shares some features with online storage services like Box.net and DropBox but Nieker likes to describe Minigroup as a “lighter” version of Basecamp, the online project management tool from 37 Signals LLC.

Minigroup is also ideal for enabling commuication and collaboration among dispersed workers, according to Tyrie Smith, co-founder of a Braizen, a full-service Web marketing firm based in Atlanta, Georgia. He said Braizen’s three-person team often find themselves working away from the office or in separate locations.

“Minigroup allows our team to instantly contact and exchange ideas about projects even when we need to work remotely,” said Smith.

Minigroup’s filtering mechanism also enables Braizen to allow clients to join project planning sessions when their input is most needed.

“We have client’s from Canada, the U.S., Australia and Europe. There’s no need for tons of e-mails going back and forth. We can provide them access to project updates and allow them to join the conversation when it matters most,” said Smith.

Social collaboration is a crowded market

In the last five years, Web-based collaboration tools and social media tools have been making inroads in the business space.

Among the many popular tools are: Prezi Meeting, a Web-based meeting tool geared towards creative projects; GoToMeeting, an online conferencing tool with video capability; Microsoft Corp.’s Lync, a desktop and cloud-based unified communication and collaboration suite for SMBs; Zoho Doc; and Google Apps. 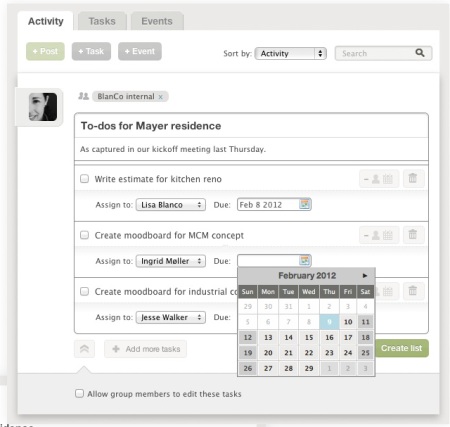 Many tech startups have been developing their own collaboration tools such as Optopz Inc. and Rocketr of Toronto which recently developed a mobile note-taking app.

The demand for online collaboration tools is driven by the need for faster and more flexible tools for sharing ideas, images and files as e-mail has become seen as a very static medium.

The volume of emails bounced around the workplace has become “unsustainable for business,” says Thiery Breton, chief executive of Atos Origin, a French company which recently declared it has become a zero email company.

Breton noted that many managers of the firm have been spending five to 20 hours/week writing and reading emails. “We are taking action now to reverse this trend, just as organizations took measures to reduce environmental pollution after the industrial revolution,” he said.

Atos has since turned to collaboration tools and social networking platforms instead to help workers share ideas and keep track of projects and reduce needless data exchanges and searches along the way. The company’s own Office Communicator collaboration tool can reduce e-mail volumes by as much as 10 to 20 per cent, according to Breton.

The education sector is also another market where tools such as Minigroup may thrive.

“There is such a big demand for better e-mail service and online collaboration capability in campus. The general feedback I get is:’ When will we get on with this already?,” said Robert Cook, chief information officer for University of Toronto.

Last year the U of T was working with Microsoft Corp., to deploy an online collaboration suite that would enable 77,000 students of the university joing a community of over 11 million other students from over 10,000 schools around the world through [email protected] and  e-mail and document management service. The cloud-based suite uses Windows Live SkyDrive, Microsoft’s Web-storage space; and free access to MicrosoftOffice Web Apps,

Cook said the university’s e-mail service is no longer enough.

“Today, students are more likely working on group assignments by using instant messaging and collaborating online in real-time on a single document,” he said.