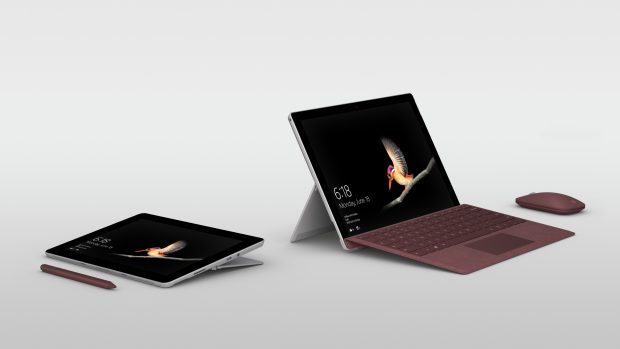 Microsoft’s new Surface Go tablet isn’t doing anything dramatically different, but it is doing its best to appeal to a wider audience while competing directly with Apple’s latest iPad.

The original Surface Pro design, which has been around since 2014, is still here. The signature built-in kickstand and flexible hardware returns, but now comes with a USB-C 3.1 port, allowing you to connect the tablet or output video to external devices.

It’s also significantly lighter. Weighing 1.15 pounds and 8.3 mm thick, the 10-inch Windows tablet has its crosshairs set on the $330 9.7 inch iPad, but doesn’t require you to spend money on a keyboard. Microsoft also says the Go has up to nine hours of battery life.

The specs aren’t going to turn heads. It includes 64GB of storage, 4GB of RAM, and an Intel Pentium 4415Y processor, though in a blog post yesterday, Microsoft chief product officer Panos Panay said the company has been working closely with Intel to optimize software for the CPU.

“The power and connectivity in a device this small gives you the style and productivity Surface is known for in a more convenient package,” Panay wrote, adding it’s perfect for the apps people use for work and school, combined with the flexibility to read, or watch a show on Netflix.

The Surface Go with Wi-Fi is available for preorder now in Canada, the U.S., Australia, New Zealand, U.K., Ireland, France, Germany, Austria, Belgium, Luxembourg, Netherlands, Switzerland, Denmark, Finland, Norway, Sweden, Poland, Italy, Portugal, and Spain. In the coming weeks, the tablet will be available for pre-order in Japan, Singapore, Korea, Taiwan, Malaysia, Thailand, Hong Kong, and in China with more markets to follow. It will hit shelves August 2, and an LTE model will be arriving later this year.