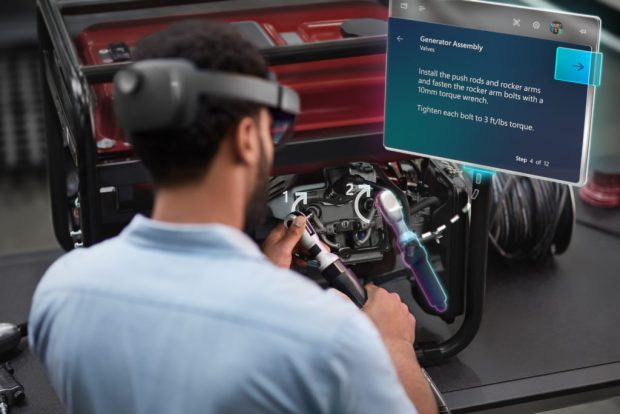 The next generation Microsoft’s mixed-reality headset, the HoloLens 2, made its debut in Barcelona this week at Mobile World Congress (MWC), wowing spectators with its latest upgrades, which the company says are focused on greater ease of use, more emersion and realistic visuals and improved comfort.

HoloLens has been intriguing people since its early incarnation back in 2015 with its ability to allow users to interact with virtually-overlaid images and content in the real world – imagine helpful instructions and imagery floating over the engine of your car as you change an air filter or, say, disassemble its alternator. But with its $3,500 USD price tag, Microsoft sees HoloLens, for now anyway, as a tool for industry such as manufacturing, industrial design and the military.

Out of the box, HoloLens 2 looks similar to its predecessor, but, Microsoft says, the headset design has changed to be lighter and less cumbersome, so it doesn’t get in the way. Improved usability comes in several ways, including from the time you put it on. Using Windows Hello’s biometric login system, its iris scan recognizes you immediately, and you’re good to go. It will even remember you and your settings so your co-workers can put it on, too.

The user’s hands are easily recognized as well, with full representations of them being created in 3D for the user to interact in the virtual space. There’s a vast improvement here, too, with the new system recognizing 21 points of articulation (the first iteration only allowed basic tap and click gestures), allowing for a more realistic user experience where you can gram and rotate holograms as you would in real life.

A recent Innovation Stories post on Microsoft’s website explains how the company’s mixed reality offerings (which could also include integration with its AI-powered depth-sensing Azure Kinect camera and Dynamics 365 Guides mixed reality app that allows companies to create holographic training manuals) have nearly endless applications in various industries. Some of these holographic interactions could include “a three-dimensional rendering of a human heart that medical students can grab, resize and rotate to see all the structures clearly. Or they can relate to physical objects in the real world, like instructions superimposed on a furnace that show you how to change a filter.”

On the visual side of things, HoloLens 2’s field of view has doubled from the last version, to 52-degrees, and improvements to its visual display system allow for industry-leading holographic density of 47 pixels per degree of sight. Translation: more vibrant and realistic holograms you can interact with like you would in the real world. Oh, and one more little thing – that’s actually a big thing – is that the new flip-up visor design allows the headset to be used with eye glasses. Under the hood, the HoloLens 2 includes the Qualcomm Snapdragon 850 chip, which is the same chip powering many of the market’s current smartphones.

“For the first time, you’re going to feel what it feels like to touch a hologram,” said Alex Kipman, technical fellow in Microsoft’s Cloud and AI group. “To interact with a hologram and to play with it, almost where you forget that this is a piece of digital content you’re looking at as opposed to it just existing in the real world.”

Derek Malcolmhttps://www.itbusiness.ca
Derek Malcolm is a writer, editor and content specialist based in Toronto. He has been covering the world of consumer technology for more than 18 years, and is the former Editor-in-Chief of Connected.rogers.com. Follow him on Instagram @derekgmalcolm or Twitter @derekmalcolm
Previous article10 key takeaways from the RightScale 2019 State of the Cloud report
Next articleHashtag Trending – Slack’s new logo; Twitter suspends activist; Smartphone has 50-day battery life