A group of University of Toronto students, pictured above from left to right: Andrew Arruda, Shuai Wang, Pargles Dall’Oglio, Jimoh Ovbiagele, and Akash Venat, are behind a new startup that built a legal application on top of IBM’s Watson platform. The cloud service, named Ross, will help lawyers answer complicated legal questions.

They’re also giving it a new name – meet Ross, the super intelligent attorney. After taking part in a contest hosted by IBM in New York earlier this month and placing second, the team of students stands to receive support from Big Blue as it sets to build a business around a cloud-based service that can answer complicated legal questions for lawyers. Ross, by taking advantage of the natural language and cognitive computing platform that Watson offers, can predict the outcome of court cases with a confidence rating, assess legal precedents, and suggest readings to prepare for cases.

While the team missed out on the top prize of $100,000 at IBM’s Watson Cognitive Computing Competition to a team from the University of Texas at Austin (it was close), they are in talks with IBM for more funding and receiving assistance as they kickoff their commercial venture. According to Mario Grech, entrepreneurial initiatives at the University of Toronto’s department of computer science, the team is signing up its first customers for pilot programs.

“There are applications that service the legal industry, but none that have the artificial intelligence and machine learning capability that Watson has,” he says. “Watson is our advantage.” 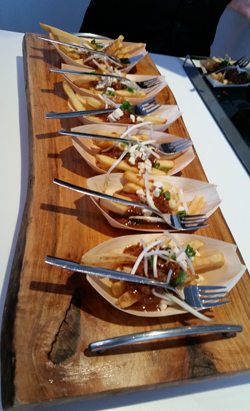 manager of academic partnerships at the IBM Canada Lab. At an event where various types of poutine were served – each a unique recipe tailor-made by another Watson application – Perelgut notes other university teams at the competition are likely to build commercial ventures on Watson’s platform.

“We’re looking at potential for revenue coming out of it and back into IBM also,” he says. “We get the value out of the research, we get value of out the students, and we even hire some of the students.”

But he doesn’t expect to hire anyone from the University of Toronto team – they’ll be too busy running their own business.

To create Ross, you could say that the University of Toronto team taught Watson like any other legal student. They loaded a huge volume of public legal documents and used the subject matter experts on their team to calibrate Watson to provide useful answers on the documents. What makes Watson so powerful is its ability to learn (hence cognitive computing) so the more lawyers use it, the better it gets.

Ross is going to be targeted at small to medium-sized law firms to start with, Grech says. It’s available as a cloud service.

“There’s a very intuitive interface… it’s like interacting with Siri,” he says. “Lawyers can do work through their laptop, on their smartphone, on the fly while in court or wherever they are.”

Ross has a huge volume of knowledge to rely upon from the public records that have been loaded on to it. The team is looking to strike deals with courts and tribunal so they can feed more legal documents into Watson as soon as they become available.

The Pinć virtual reality headset has reached its crowdfunding goal of $50,000