Made in Canada software helping to power the Cricket World Cup

While Canada may not have made it officially to the Cricket World Cup, many Canadians were glued to their televisions, and software developed by SAP SE in Canada helped to power the matches.

SAP partnered with the International Cricket Council (ICC) to provide a better fan experience around the matches, and they’re using the SAP Hana cloud platform and developed in Canada SAP Lumira data visualization software to help analyze and simplify ball-by-ball match data in real time and give fans a richer, data-driven experience around statistics and historical insights during the tournament.

Related
How the NHL is taking content-based marketing and partnering beyond video
Was Gordie Howe or Wayne Gretzky the better player? Ask SAP

The cricket partnership follows similar deals for SAP with the National Hockey League and other sports leagues.

“This year’s tournament has been the most digitally advanced in ICC Cricket World Cup history, including 3 million downloads of the official mobile app,” said David Richardson, ICC CEO, in a statement. “The event web site is fully responsive, adapting to all devices, with cutting-edge design making all the tournament’s details accessible, informative and engaging for cricket fans all around the world. The Match Centre presented by SAP, available across both platforms, houses the fastest live scores available anywhere online.” 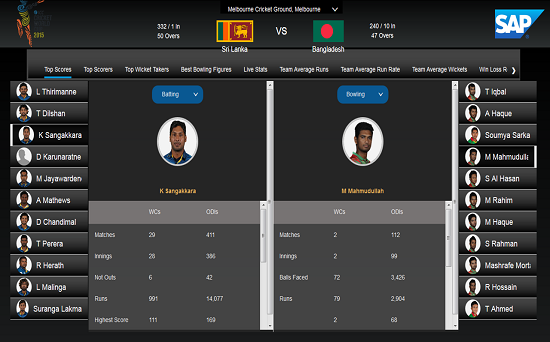 In addition to real-time data, SAP also made 40 years of ICC Cricket World Cup historical statistics to fans through the ICC Match Centre, and provided fans with tools allowing them to compare past and present team performance. Using the predictive features of SAP Hana, fans could identify the best players based on analyzing multiple statistical criteria.

“As cricket is one of the world’s most popular sports, we saw a great opportunity to work with the ICC to help them simplify the way they analyze and share data with their passionate fan base,” said Scott Russell, COO of SAP Asia Pacific Japan, in a statement. “We’re delighted to work with the ICC to allow fans around the world to feel closer to this year’s World Cup and the sport they love.”

Jeff Jedras
Jeff Jedras is a technology journalist with IT World Canada and a member of the IT Business team. He began his career in technology journalism in the late 1990s, covering the Ottawa technology sector for Silicon Valley North and the Ottawa Business Journal. He later covered the technology scene in Vancouver before joining IT World Canada in Toronto in 2005, covering enterprise IT for ComputerWorld Canada and the channel for Computer Dealer News. His writing has also appeared in the Vancouver Sun & the Ottawa Citizen.
Previous articleWaterloo startup Eventastic looks to best Eventbrite in online event management
Next articleIBM partners with The Weather Company to update forecasts 26 billion times a day