TORONTO – Voltera Inc. CEO Alroy Almeida knows how frustrating it can be for manufacturers to build and test new components. It’s what led him and three friends to found their company in the first place.

The three-year-old Kitchener, On.-based startup’s signature product, the V-One – which was partially funded by a Kickstarter campaign – is a compact 3D printer that allows manufacturers large and small to easily build prototype circuit boards in minutes.

“We were in the industry designing electronics, and especially in the early prototyping stages, when you just need a quick prototype to figure out if your idea works, you often have to wait a couple days or even a couple weeks to get a board back from a factory,” Almeida explained. “It can be really detrimental to the design process – by the time the boards are out, sometimes you’ve forgotten the change you had made.”

To solve the industry’s problem – and their own – Almeida and his University of Waterloo friends Katarina Ilic, James Pickard, Jesus Zozaya proceeded to dive deep into the world of conducting technologies and printable electronics, “messing around” with multiple conductive inks over a two-year period before finally developing their own silver nanoparticle-based ink that hit their self-imposed benchmark for conductivity.

“We came from industry – we knew what it needed to do in order to suit for our applications,” Almeida said.

Since it began shipping the V-One last fall, Voltera has seen its printer eagerly embraced by manufacturers in several different sectors, including consumer packaged goods, semiconductor manufacturing, automotive design, and even health care, with small and medium-sized businesses (SMBs) comprising its largest customer base.

“We basically allow all sorts of companies to prototype new products and electronics incredibly quickly, and that happens in a variety of industries,” Almeida said.

Part of the V-One’s appeal, no doubt, is its ease of use: As Almeida demonstrated for ITBusiness.ca after his presentation, the software is as carefully designed as its components, automatically converting Gerber image files into printer instructions while requiring minimal input from the user.

For his demonstration, Almeida instructed the software to print the simple one-sided LED circuit called “Hello World” that the V-One prints for the first time by default (though regrettably, he did not bring any LED lights to connect it to). 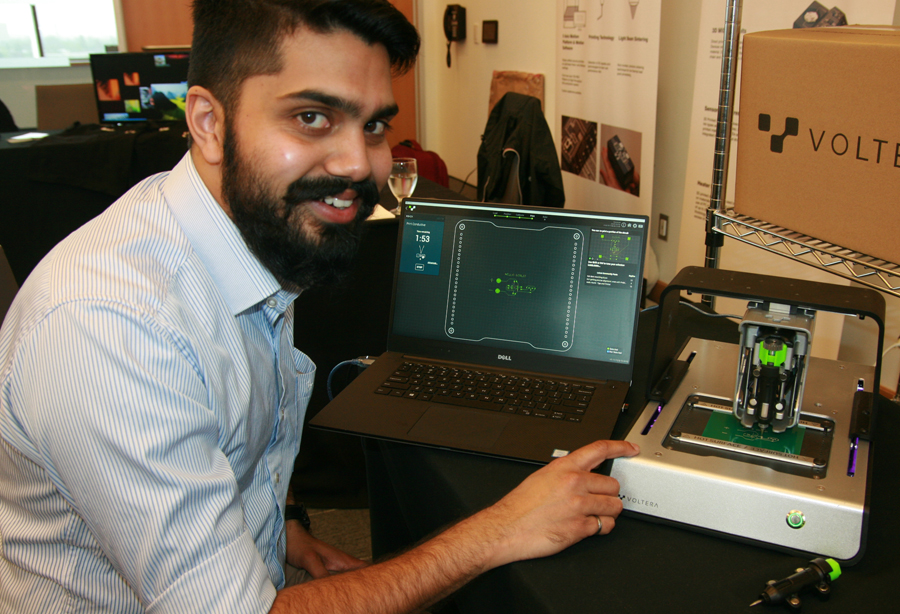 While users must switch the device’s various nozzles, which connect via magnet, and are required to secure the blank substrate boards the V-One prints on before it begins (more advanced manufacturers can also use it to print two-sided boards), the device is designed to automatically detect its task’s printable surface and establish the necessary X-, Y-, and Z-axis before laying down its conductive ink. A timer on the user’s computer, meanwhile, lets them know how long the process will take.

In the case of “Hello World,” Almeida produced a working circuit in about three and a half minutes, after which the device raised its bed’s temperature to a level high enough to thermally set the ink. 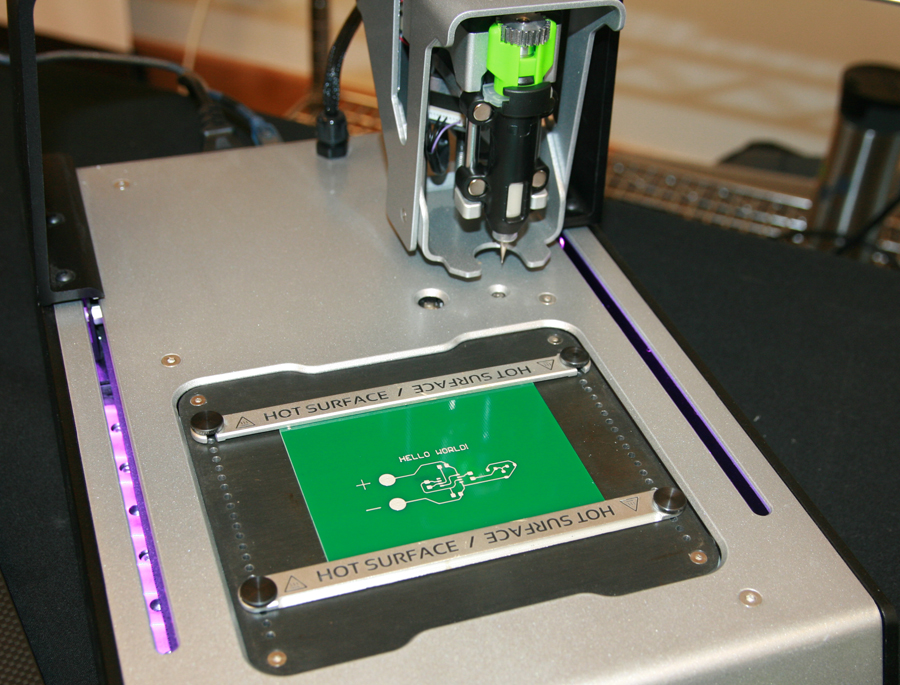 For those interested, the V-One carries a price tag of $3500 USD and includes six medium-sized three-inch by four-inch substrate boards; 10 smaller-sized two-inch by three-inch boards; solder wiring; flux; and one cartridge each of conductive ink and solder paste – “everything you need to start printing right away,” Almeida said. The company also offers large four-inch by five-inch boards on their website, along with template substrates for the Arduino and Raspberry Pi platforms, among others.

“A lot of our customers will reach out and say, ‘I unboxed this and was printing my first circuit within minutes!'” Almeida adds proudly.

Eric Emin Wood
Former editor of ITBusiness.ca turned consultant with public relations firm Porter Novelli. When not writing for the tech industry enjoys photography, movies, travelling, the Oxford comma, and will talk your ear off about animation if you give him an opening.
Previous article
Adhesive manufacturer 3M’s tech footprint is larger than you might think
Next article
IoT hits the golf range with TopGolf