Facebook users are falling for yet another clickjacking scam that fools them into “liking” a page. This one lures victims with the message “Paramore n-a-k-ed photo leaked,” which claims to point to a Web site containing a naked photo of Hayley Williams, lead singer in the rock band Paramore.

But clicking onward only brings the Facebook user to a page which, unbeknownst to the victim, has hidden code that executes the action of “liking” the Web page.

That action gets published on the victim’s Facebook page and shared with online friends, according to security firm Sophos, which has been tracking this type of attack, which it calls “likejacking.” 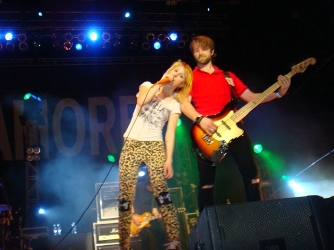 Hayley Williams and Jeremy of Paramore

Sophos earlier detailed other likejacking exploits based on other phrases, such as “The Prom Dress That Got This Girl Suspended from School” and “This man takes a picture of himself EVERY DAY for 8 years!”

Sophos senior technical consultant Graham Cluley says the likejacking attack that attempts to gull users with the message ‘Paramore n-a-k-ed photo leaked!’ will take victims to a third-party Web site, which displays a message that says: “Click here to continue if you are 18 years of age or above.” But don’t do it, Cluley says, writing a blog on the topic.

“What the hackers have actually done is very sneaky. They have hidden an invisible button under your mouse, so wherever you click on the website your mouse-press is hijacked. As a consequence, when you click with the mouse you are also secretly clicking on a button which tells Facebook that you ‘like’ the webpage. This then gets published on your own Facebook page, and shared with your online friends, resulting in the link spreading virally,” Cluley writes. It’s technically similar to the earlier likejacking exploits in that it makes use of what’s called an iFrame exploit.

He notes the same Web site associated with the Paramore likejacking attack is hosting another Web page containing a clickjacking attack related to “teen heart-throb singing sensation Justin Bieber,” that claims his phone has been leaked.

Cluley says Facebook should consider altering how ‘liking’ is executed online. “It’s clear that Facebook needs to tighten up the way it handles the ‘liking’ of external webpages before it is even more widely abused by malicious hackers and spammers.”

Cluley speculates that the likejacking exploits recently seen may be a proof-of-concept attack that could lead to more dangerous use of this type of exploit in the future, such as spreading dangerous malware.

Move over Anonymous, make way for The Unknowns