Life on MaRS: Help for over 2,000 startups and counting

Phase two of life on MaRS starts just under a year from now.

Six years after phase one of the MaRS Discovery District officiallyopened its doors on downtown Toronto’s College Street, the first majorexpansion of the massive facility is scheduled for completion in fall2013. The phase two expansion, started back in 2007, will more thandouble the existing 750,000 square feet of space where over 2,300people already gather daily to work and learn.

As the phase two addition gets closer to opening its doors, it’s worthtaking stock of what MaRS has become for Canada’s startup community andlooking at where it’s headed next.

MaRS was founded as a not-for-profit corporation in 2000 with the goalof creating a place to help turn science and technology innovation intoviable early stage businesses. It’s not just a concept, it’s also aphysical space, a cluster of buildings housing research labs, offices,venture capital firms, incubator facilities, and communityorganizations to support them.

“Our mandate is to work with early stage ventures and help thesecompanies grow,” says Don Duval, vice-president of business services atMaRS. The program’s success, he says, is measured by “the amount ofjobs and wealth our companies create.”

According to Duval, MaRS has served over 2,000 early stage venturesthroughout Ontario since it opened in 2005. In the last fiscal year itsclient companies raised over $100 million in capital and created atleast 600 new jobs. There are about 850 firms in MaRS’ active roster ofclient companies right now. Though Duval says “only a handful” of thestartups from MaRS have made exits “for the most part throughacquisitions” (although none through IPOs), he makes no apologies thatthe next Research In Motion Ltd. has yet tograduate from the halls ofMaRS. 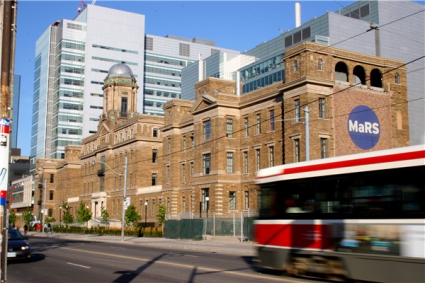 A $344-million expansion isunderway at MaRS

“A large proportion of our companies fail and our role is to help these companies fail cheaply and fail quickly to get back on the horse,” Duval says. “About 85 per cent of the job and wealth creation (from MaRS startups) comes from a very small subset, about 15 per cent of the portfolio. So about 120 companies (of the current 850) will be the ones that contribute to the economy.”

Polar Mobile a MaRS success story
There are MaRS successes that have ‘made it’, of course, and one of the more notable is Polar Mobile Group Inc., which developed a BlackBerry app for the 2010 World Cup soccer championship that got over 26 million page views in 30 days. The company was founded in Waterloo, Ont. in 2007 and relocated to Toronto in 2008. That same year, it started tapping into the mentorship, advisory and business plan services at MaRS, even though it never actually moved onto the MaRS campus facilities.

“Absolutely,” says Marlon Rodriguez, director of alliances at Polar Mobile. “It’s one of those things where you have to figure out how to make it useful for you. It’s not babysitting or a formal incubator program where they push you. But they can advise you on your (business) plan so you can get to where you want to get faster.”

Besides picking the brains of some great MaRS advisors, the Polar Mobile team also took advantage of the market research services at MaRS, which scours the globe for the latest market intelligence data to help MaRS startups plot their business strategies.
The MaRS experience certainly seems to have given Polar Mobile an edge. In October the firm’s mobile apps surpassed 10 million downloads and 1.5 billion pages since the company’s first app was launched in 2008. Today Polar Mobile has 320 customers in 11 countries and powers 1,200 apps over iOS, BlackBerry, Android and Windows Phone platforms. In the past year the company has increased its number of overseas customers by more than 220 per cent and its total user base by 67 per cent.

“Our revenues have doubled every year. We’re up to 40 people now and we’re looking to hire four or five more,” says Rodriguez, adding the company opened a satellite office in Dubai a few months ago, just opened a San Francisco location this month, and plans to set up a sales and marketing office in New York City within the next few months.

Money and podcasts from MaRS
MaRS and its services have evolved over the past six years to work towards turning out more success stories like Polar Mobile. In 2008 MaRS Innovation was launched, a program that aggregates and links patents and other intellectual property created by 16 Ontario research and academic organizations to foster licensing opportunities and other tech transfer activities among them.

There’s also the $7 million Investment Accelerator Fund, allocated by the province, that makes seed investments in early stage life science firms across Ontario. The online educational offerings available to MaRS startups have expanded and now include blogs, podcasts and other resources to complement in-person courses like Entrepreneurship 101.

MaRS has four main practice areas it focuses on: cleantech; life sciences and healthcare; information technology, communications and entertainment (ICE); and social innovation. MaRS has been putting an added emphasis on the social innovation stream through its Centre For Impact Investing (to boost financing for startups tackling social and environmental problems) and the Social Innovation Generation, a program providing specific support for startups in that niche. The ICE practice is also expanding with MaRS Commons, a new 6,000-square-foot space to house 50 entrepreneurs from Web and mobile startups.

The next key chapter of the MaRS story will begin with the completion of the $344-million phase two expansion, including the 20-storey MaRS Centre addition, in fall 2013. Although work on the project began well before the latest economic downturn, some critics began to question how money – much of it public funding – was being allocated at MaRS when so many Ontarians were feeling the weight of layoffs. In 2010 the number of MaRS execs on the so-called sunshine list of provincial public workers making over $100,000 per year rose from 16 to 21. CEO Ilse Treurnicht’s pay alone jumped by $100,000, a 22 per cent increase, that year.

Duval responds that “all executive salaries for MaRS are published (as per) Ontario legislation, so that’s pretty transparent.”

A MaRS spokesman also pointed out this summer that wages at the facility were voluntarily frozen from 2008 to 2010 and construction on the phase two expansion was temporarily halted for a while due to the 2008 downturn.

Anchor of Toronto’s startup community
That pause has ended and the MaRS facility continues to grow along Toronto’s College Street and University Avenue corridor. It’s a transformation that draws delegations from around the world (including China, India, the U.S., Africa and Europe, Duval says) who are interested in possibly importing the MaRS model abroad.

The way MaRS houses a cluster of startups and access to entrepreneurial resources in such close proximity “is to me a best practice and a model that can be adopted in various sizes across (Canada),” says John Reid, president and CEO of the Canadian Advanced Technology Alliance in Ottawa.

“By having them intertwined it gives the SMB person access to far greater resources and we need that in terms of improving our commercialization record,” Reid says.

“But that doesn’t necessarily mean that’s the version you put in place for your local community,” Reid adds. “Toronto is a large city so that model might not be the right model for Strathroy (Ont.). But Strathroy may be able to use aspects of that in a different setting. So it really is a need to customize. Everyone is going to create a slightly different version based on their local resources and infrastructure.”

For Rodriguez, whose company moved from the major IT hub of Waterloo, the MaRS framework has paid off – directly and indirectly — for Polar Mobile and many of the other startups that call Toronto home.

“I think the big thing is we need an anchor in the downtown Toronto community that can provide the accelerator advisory services that MaRS provides. Just the symbol of having a landmark that’s so centrally located in the city is an important part of not only the startup community but also the high school and university and college community as well as the established business community because it showsenthusiasm for creating new business.”

With phase two’s competion in its sights, MaRS hopes to launch more of its startups towards astronomical success.

Christine Wonghttp://www.itbusiness.ca
Christine Wong has been an on-air reporter for a national daily show on Rogers TV and at High Tech TV, a weekly news magazine on CTV's Ottawa affiliate. She was also an associate producer at Report On Business Television (now called BNN) and CBC's The Hour With George Stroumboulopoulos. As an associate producer at Slice TV, she helped launch two national daily talk shows, The Mom Show and Three Takes. Recently, she was a Staff Writer at ITBusiness.ca and is now a freelance contributor.
Previous article
Hackers could attack modern cars without even touching them
Next article
Fotobounce offers photo sharing without privacy risks

Watch ITBusiness.ca editor Eric Emin Wood explain the benefits of being a...