If the LG G8 ThinQ was a person, it would be the sharply dressed, yet down-to-earth type. It doesn’t have the thinnest bezels nor a razor sharp tapered profile. Rather, the LG G8 ThinQ focuses on perfecting the simple fundamentals. Lacking any sharp edges, all sides of the LG G8 ThinQ seamlessly flow into one another, creating a pleasantly smooth contour perfect for delicate hands. 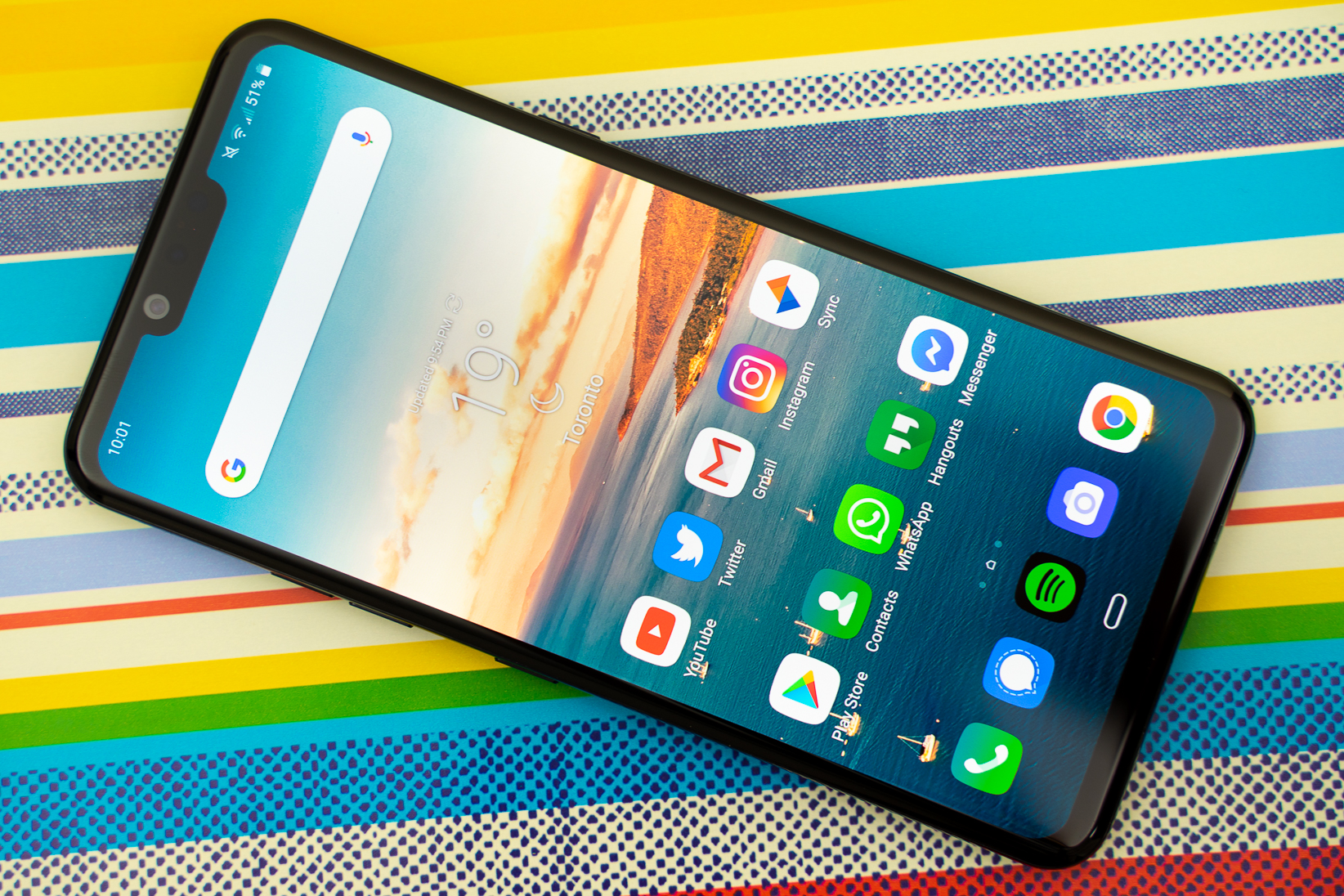 The front camera is housed in a subtle notch at the top. Because there’s a top bezel to house the electronics, the notch doesn’t need to be too tall and cut into the display. 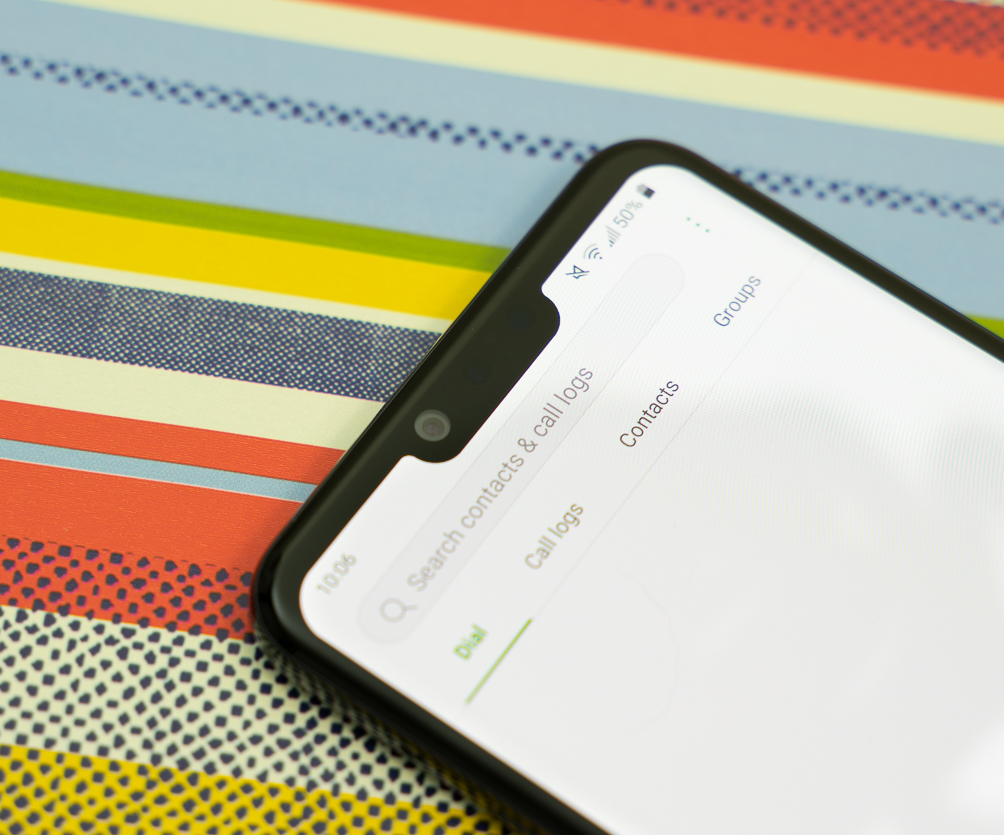 A narrow bezel also protrudes from the base. Again, it’s nothing to fret about. 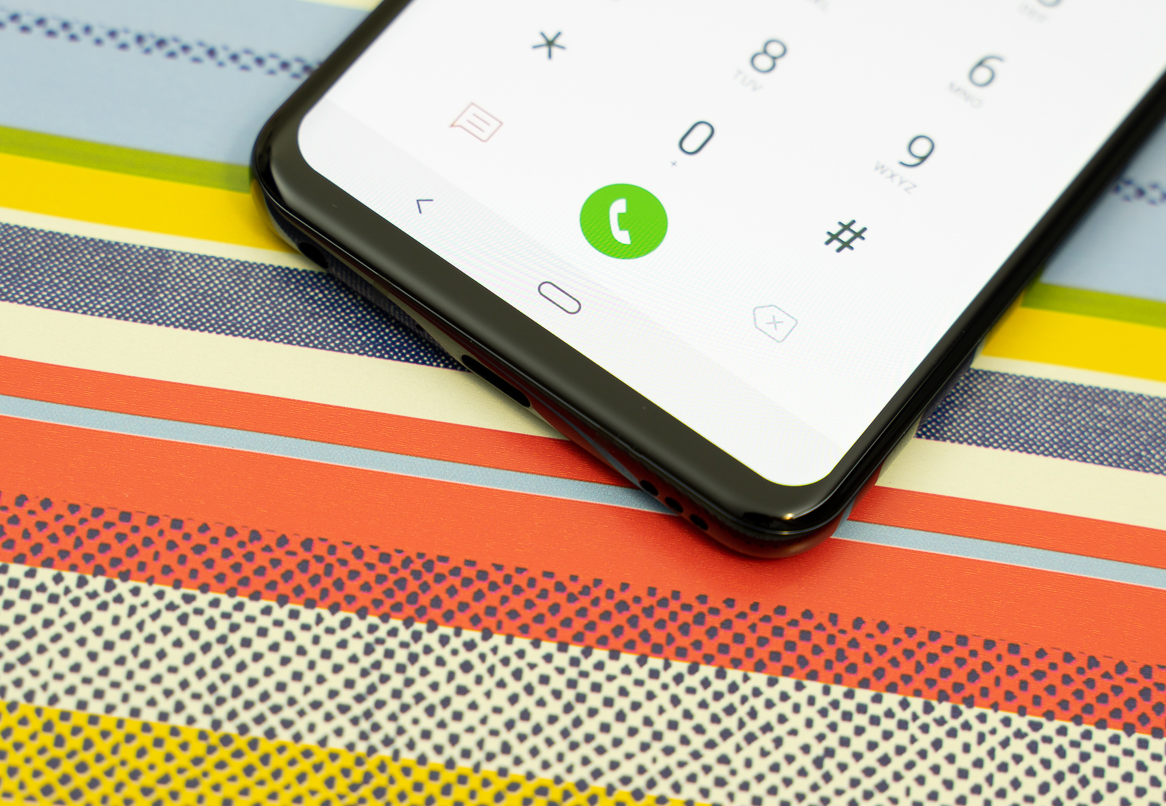 The LG G8 ThinQ’s camera array is slid under the rear glass, lending the phone an attractive flush look. If it wasn’t for the fingerprint sensor, I’d say this is the smoothest looking phone yet. 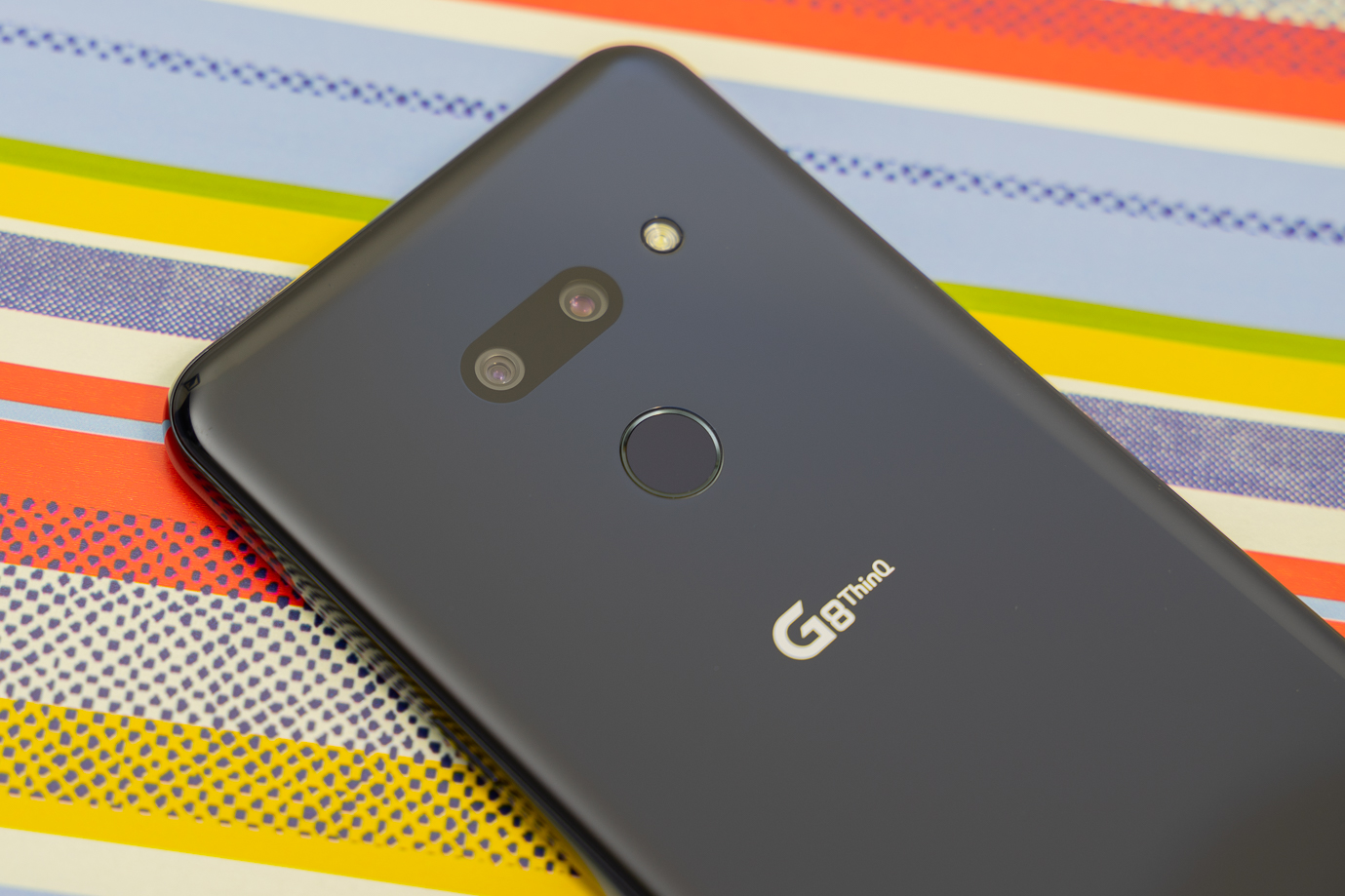 With that said, you’d be hard-pressed to not slip it into a case due to how slippery it is. Aside from sandpaper, The LG G8 ThinQ can slowly slide off any tilted surface. The process can sometimes be so gradual that you won’t notice it until it hits the floor. A grippy case is mandatory.

The volume buttons are located on the left, which, as a right-handed user, often forces me to reach around using my index finger to adjust the volume when watching videos. 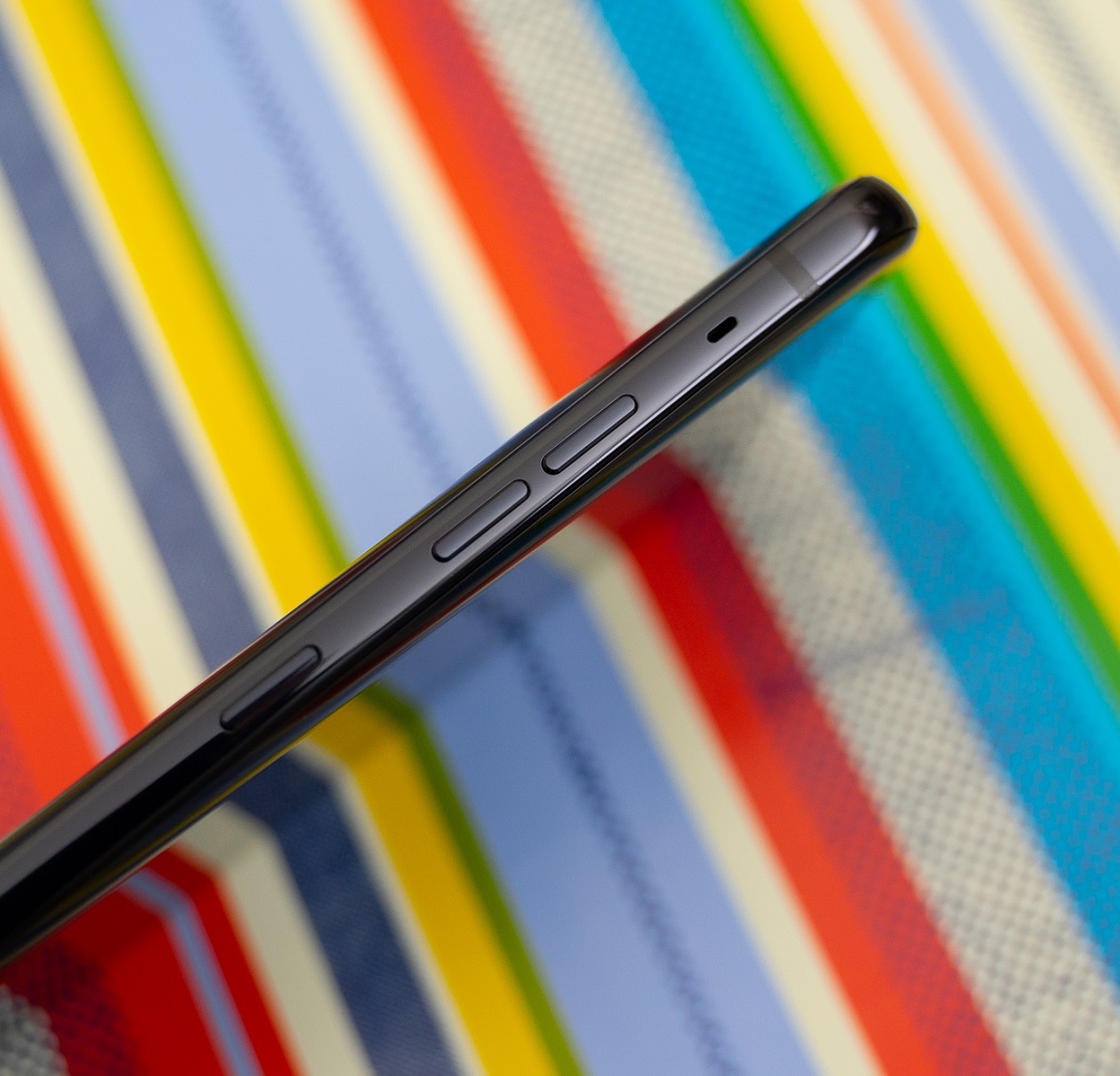 The SIM tray is placed horizontally and has a rubber ring to seal the opening, upholding the IP68 weatherproof rating. 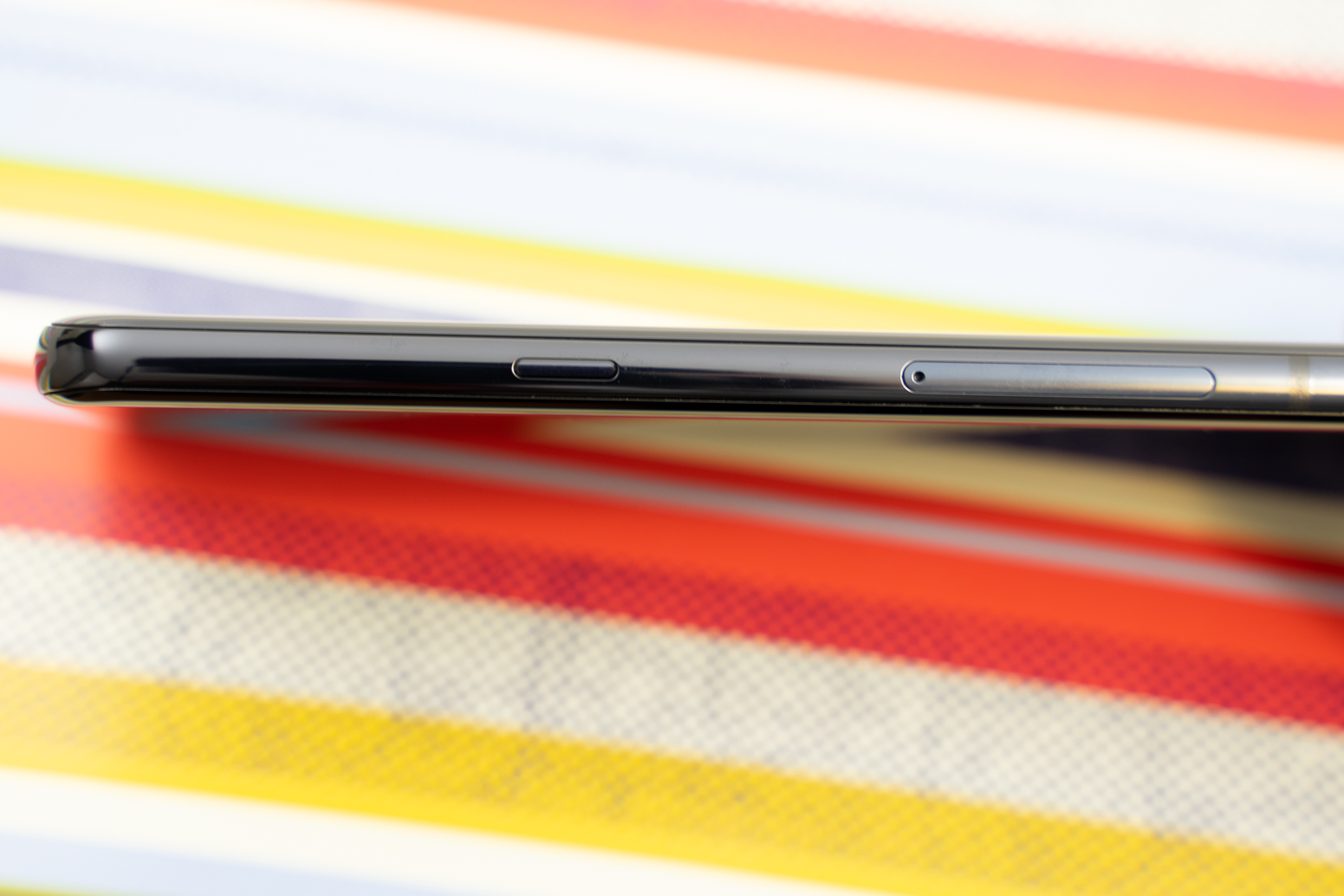 Because audio has always been one of LG’s key focuses, it’s a shame to find only a single mono base speaker. The speaker works in tandem with the earpiece to create stereo sound, albeit much louder. 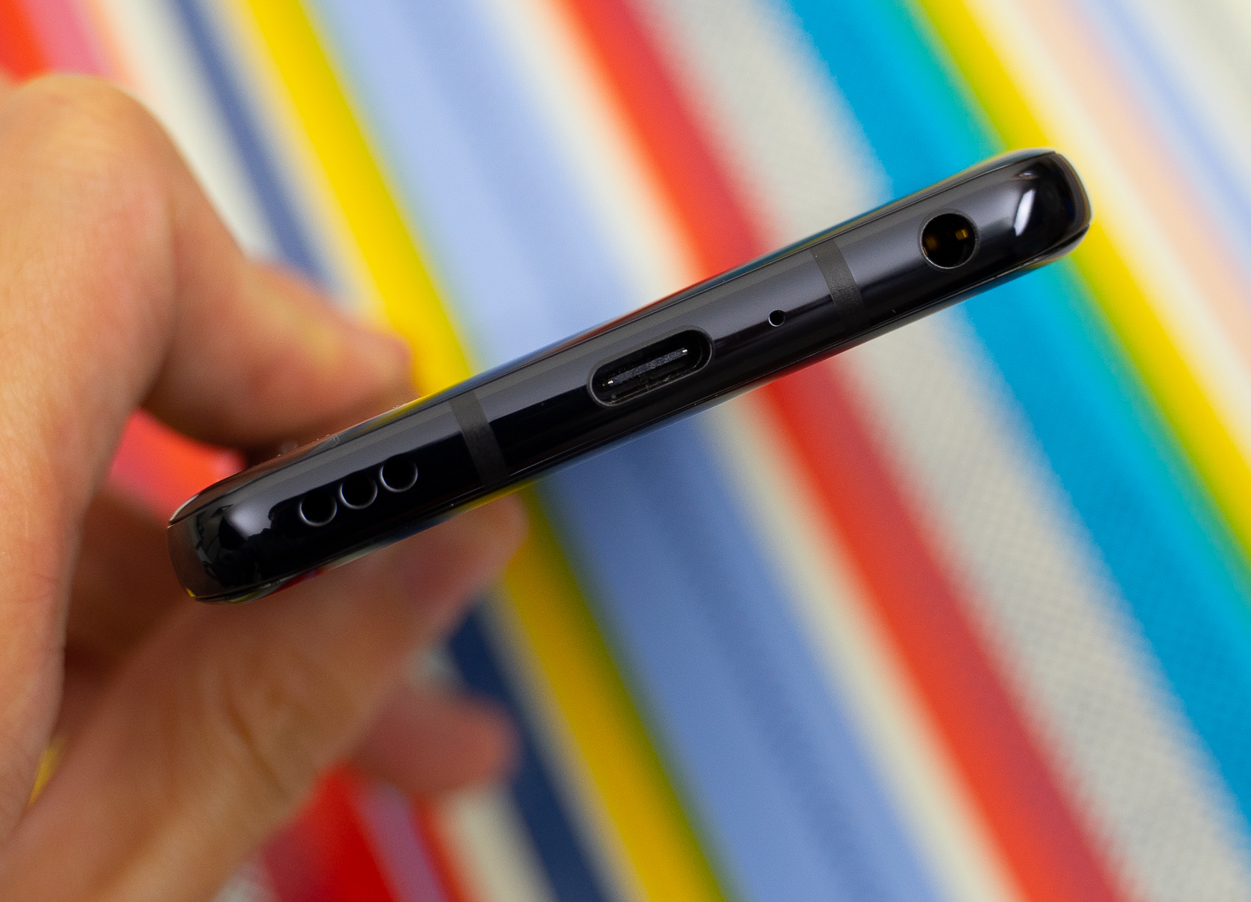 There’s a headphone jack powered with a quad digital-to-analog converter (DAC). In my experience, enabling the DAC actually degrades audio quality. When listening to Spotify (at high quality) using a set of SoundMagic E50 earphones, turning on the DAC noticeably increased noise.

The LG G8 has a commendable 6.1” 3,120 x 1,440p OLED display. Its colors are more saturated than the Google Pixel 3 XL (which is fantastic in its own right) but not completely overblown. Peak brightness is more than usable in bright sunlight. In addition, the display is certified for HDR10 and covers 100 per cent of the DCI-P3 color gamut. 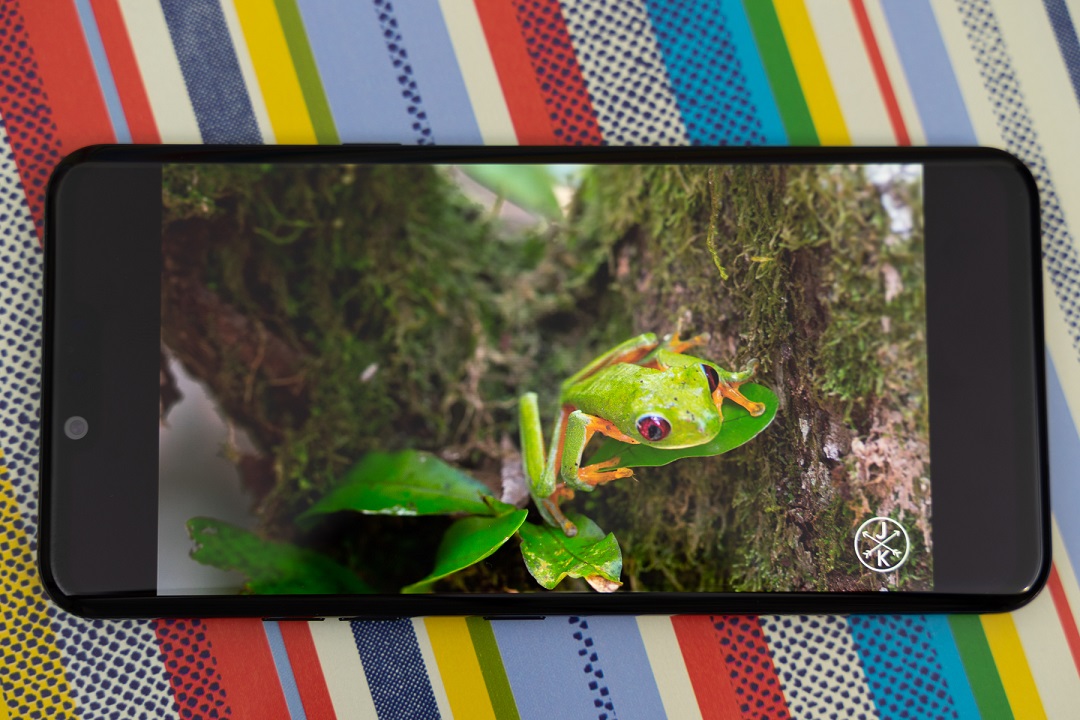 Out of the box, the resolution is set to 2,340 x 1,080p. While it’s great for everyday use, dialing up to 3,120 x 1,440p noticeably enhances the sharpness. This glorious view comes at the expense of battery life. If longevity is a priority, the screen can be dialed back to 1,560 x 720p to eke out an extra drop of battery. Even at this setting, fonts are still plenty defined for reading.

LG calls the notch area the New Second Screen, possibly alluding to the dual-screen design of its V10 to V30. The notch can be hidden by applying a black bar across the notification area. Those feeling funky can apply different gradient bars, but they can look a bit out of place in certain apps.

Color quality can be adjusted by shifting between Cinema, Game, Photos, and Web settings, which slightly alter the color temperature and saturation. It even provides sliders for red, green, and blue in Expert mode.

The phone’s Qualcomm Snapdragon 855 chipset has no problem when it comes to all things performance.

Qualcomm touts that the new Kryo 480 CPU built on 7nm transistors is 45 per cent faster than the Kryo 380 CPU on the Snapdragon 835, its previous flagship chip. In addition, its Adreno 630 graphics is supposedly 20 per cent faster than the Snapdragon 835’s Adreno 630. Many other subsystems including the neural engine, ISP, and modem have been made faster and more power efficient as well.

Unsurprisingly, the LG G8 ThinQ scored extremely close to the Samsung Galaxy S10+, which uses the same chipset. The differences are close enough to be considered negligible. 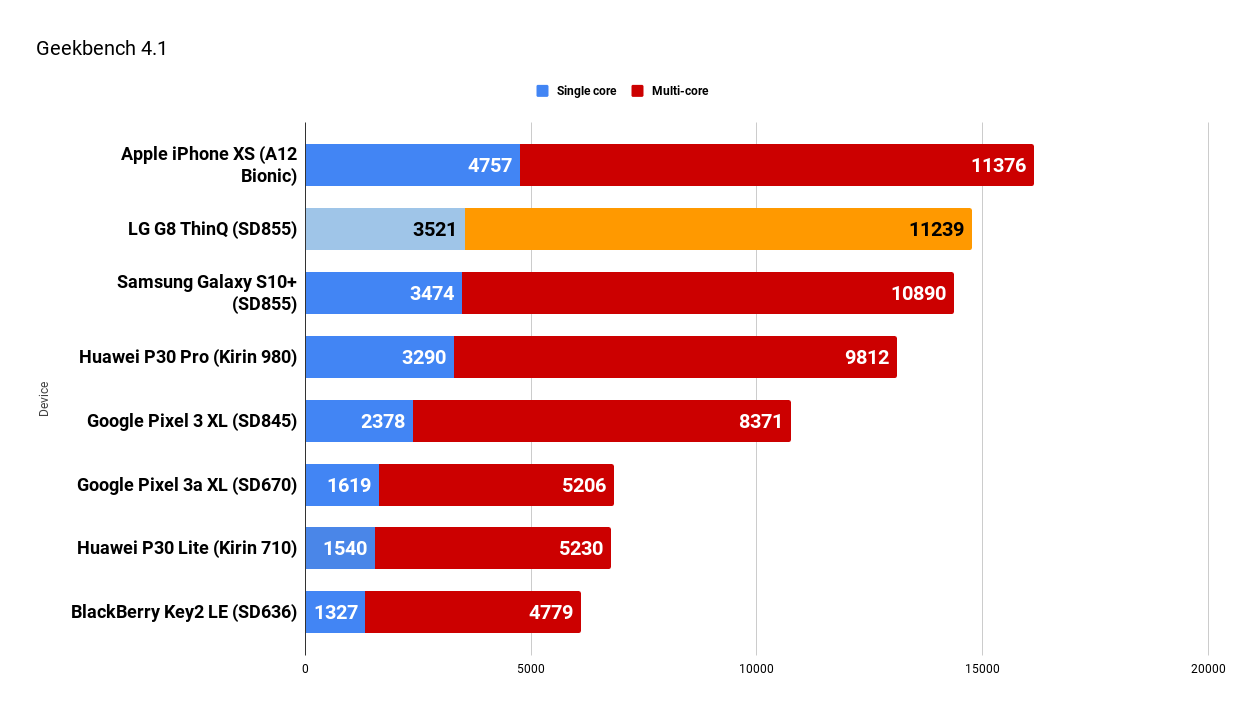 In theory, the LG G8 ThinQ should score identically to the Samsung Galaxy S10+, but it wasn’t the case. Its overall 8,823 score is still impressive, but that’s a whole 10 per cent slower than the Galaxy S10+. Since PC Mark Work 2.0 tests for overall system performance, it’s difficult to pinpoint the exact cause(s) for its trailing numbers. 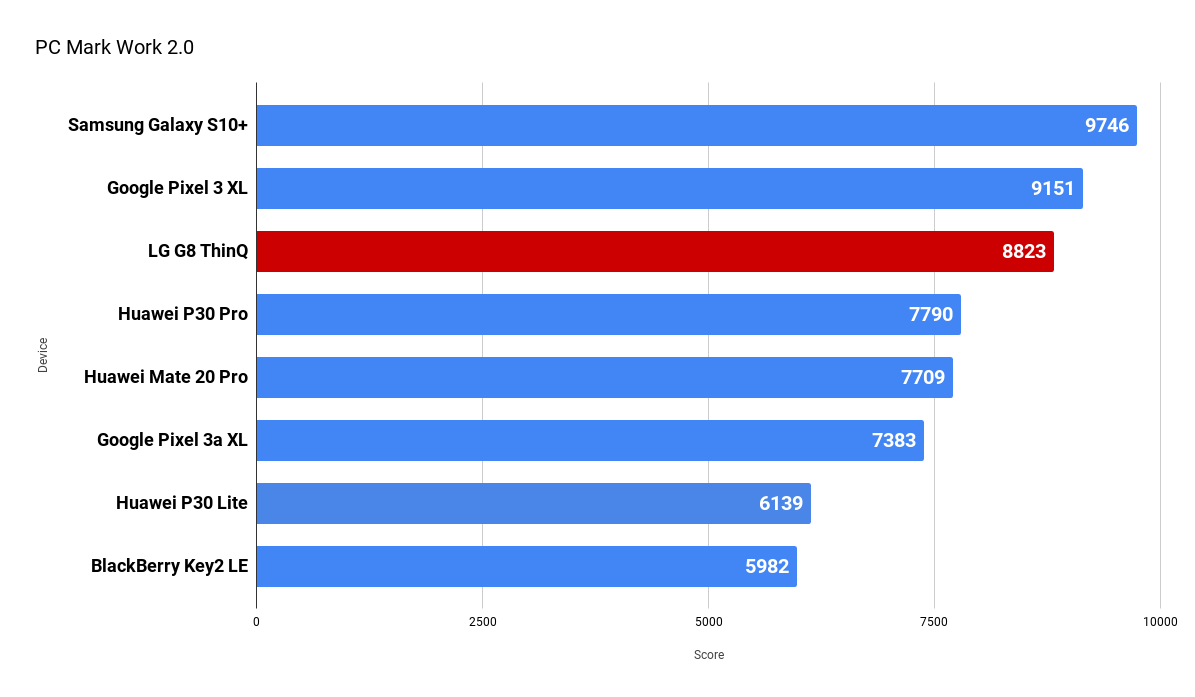 3D Mark Slingshot Extreme evaluates graphics performance through a number of scenarios containing different physics, lighting, geometry, and particle effects. The scenarios are designed to be more intensive than most real-world apps to truly stress the GPU. Here, the LG G8 ThinQ scored as expected, coming within one per cent of the Galaxy S10+. 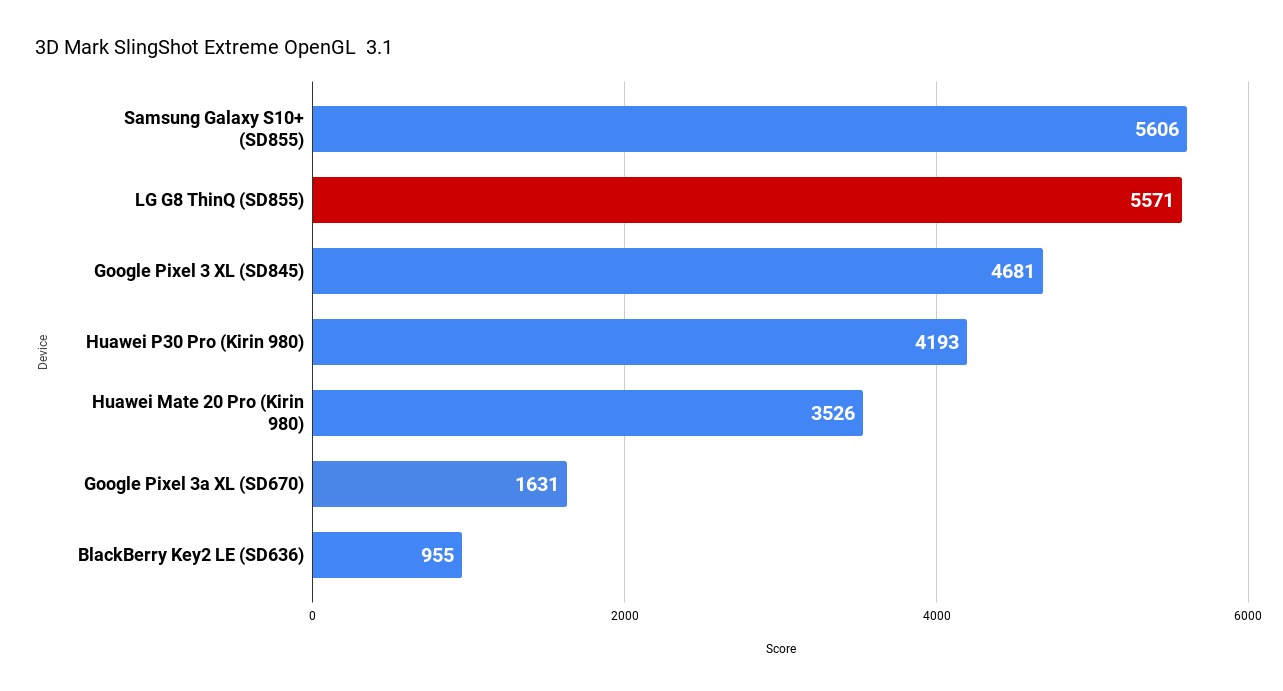 The LG G8 comes with a dual and triple camera configuration. The dual camera setup features a 12MP f /1.5 camera and a 16MP f/ 1.9 camera. The cameras are tucked behind a single glass back pane and look beautifully slick.

The camera on the LG G8 ThinQ is tack sharp. It’s tremendously capable of accentuating fine lines in dense patterns as well as delivering punchy colors. In good lighting conditions, it’s performance is definitely on par with other flagship phones.

With that said, tricky lighting conditions can throw off its HDR mode. A few pictures shot in harsh daylight show clipping in darker areas. Tuning the post-processing to brighten the blacks would have easily mitigated this.

Lowlight photography is another disappointment. As with night modes on other phones, the LG G8 ThinQ’s dedicated Night Mode leaves the shutter open for a few seconds to capture more light, but the result isn’t that much different from the regular shooting mode. The image quality is still rich with detail, though.

There is lots going on at the front.

The LG G8 has an 8MP f/ 1.7 camera and a Time-of-Flight (ToF) sensor. The ToF sensor not only enables Air Motion – a feature where it senses hand gestures to control the phone – but also is an essential part of secure facial unlock and — get this — handprint unlock. Aptly named Hand ID, the phone can scan the veins in your hand to unlock your phone.

LG’s custom Android 9 Pie divides the settings tab into four categories, making navigation simpler and niche options easier to find. It ranks as one of the cleanest settings menu I’ve used and deserves a huge thumbs up.

One of LG G8 ThinQ’s exclusive feature is Air Motion, a feature that uses the front camera to control the phone using hand gestures. For example, forming a claw shape over the front camera allows you to adjust the music volume by turning your hand left and right. A few other gestures enable screen capture, muting alarms, and answering calls.

While this sounds useful for times when touching the phone is inconvenient, it’s too inconsistent to be reliable.

The Time-of-Flight (ToF) sensor activates quickly, but gesture registration is lacking. When adjusting volume, moving your hand before retracting it out of the detection zone can completely mess up the setting you’ve just carefully tuned. And while you’re struggling to get it to work, you’ll gather confused stares from bystanders. Finally, using Air Motion outdoors is a two-hand operation: one hand to hold the phone and the other to gesture, which adds unnecessary complexity.

With that said, there are still other useful features available. Dual app installs a second instance of compatible social media apps and allows for a second account. This is useful for managing both work and personal social profiles on one device. Floating Bar is another useful feature, which provides a list of app and function shortcuts through an expandable floating button.

Powered with a 3,500mAh battery, the LG G8 ThinQ ekes out between four and a half to five hours of screen-on time — enough for a day of use, but you’ll need to charge it every night. Granted, I tested my unit at the sharper 1,440p constantly, so dialing back on the resolution can extend the run time slightly.

The LG G8 ThinQ has flagship specs, but isn’t quite LG’s true flagship. That’s reserved for its V series.

One benefit of being in an awkward second place is cost. Compared to most other flagship phones and their smaller variants, the LG G8 ThinQ is between $100 to $200 cheaper. At Bell Mobility, the LG G8 ThinQ goes for $1,249 outright, while its closest competitor, the Samsung Galaxy S10 goes for $1,399 outright. Freedom Mobile has it for the cheapest price, asking for $1,079.

An excellent alternative, though, is the Huawei P30. It boasts an exceptional camera set and a much larger battery. Despite its more rounded feature set, with the ongoing controversies surrounding the U.S. Entity list, its future support is in potential jeopardy.

The price directly reflects the feature compromises that the phone inherently carry. It nails most of the right components: a beautiful screen, fast processor, sharp cameras, and ample storage just to name a few. The most pronounced drawback is its battery life, but for $200 less, the more attractive price can sway potential buyers, but it can still be uncertain.

All things considered, the LG G8 ThinQ isn’t far from being a bad phone, and is very attractive compared to LG’s previous generation G series. It has a down-to-earth, comfortable design, great screen, and the currently fastest Qualcomm chipset.

With that said, its Night View Night mode isn’t all that impressive. It only provides a marginal exposure boost relative to the regular shooting mode. In addition, its HDR mode can sometimes produce some wonky colors, leading to clipped blobs in shadows.

Perhaps even more jarring is its Air Motion gesture control. The concept sounds good on paper, but practically speaking, it’s just not as intuitive as using buttons. With that said, I can see it become more widely adopted once its accuracy is refined a bit.

Unfortunately, the LG G8 ThinQ compromises on battery capacity to bring you the thin design — something no business user wants to hear. Its five hour SoT was decent for 2016, but it’s below average compared to flagship phones today.

Even still, just because it’s worse in comparison, the LG G8 ThinQ isn’t a bad phone, I just wouldn’t recommend it as a top choice. If it goes on sale, which many LG phones typically do soon after launch, then the LG G8 ThinQ can tout excellent value.

Tom Li
Telecommunication and consumer hardware are Tom's main beats at IT Business. He loves to talk about Canada's network infrastructure, semiconductor products, and of course, anything hot and new in the consumer technology space. You'll also occasionally see his name appended to articles on cloud, security, and SaaS-related news. If you're ever up for a lengthy discussion about the nuances of each of the above sectors or have an upcoming product that people will love, feel free to drop him a line at tli@itwc.ca.
Previous articleHashtag Trending – Creepy deepfake; The robotics revolution; New York’s “Supernode”
Next articleSugar Creek Brewery adding AI and IoT to the ingredients list