Under current U.S. and Canadian laws, startups can only accept equityinvestments from venture capital funds or smallangel pools likefriends and family. Any large scale equity fundraising outside of thosesources requires a company to go through the lengthy and expensiveprocess of filing a prospectus with securities regulators.

The Entrepreneur Access to Capital Act could change all that in theU.S. It would allow American businesses to raise startup equity capitalby accepting small, direct, lump sum investments from a large volume ofpeople over social media networks. The billhas already been passed bythe U.S. House of Representatives and is now before the U.S. senate – apace that has some Canadian tech watchers anxious to enact similar lawshere. 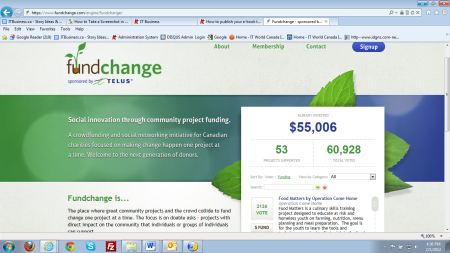 “We don’t want to have this launched in the U.S. and then have to playcatch up,” said CATA president John Reid. “It’s time that Canada is notcontinually playing innovation catch up and funding catch up.”

CATA is lobbying provincial securities regulators to make similarchanges here. While the new American legislation would be overseen by asingle national watchdog, the U.S. Securities and Exchange Commission,Canada still has no national regulator, after a Supreme Court decision recently declared such a body unconstitutional.

CATA is throwing its weight behind the movement for practical as wellas philosophical reasons.

“CATA discussed with one contact how we could create a crowdfundingplatform to help small companies grow. We wereadvised by legal counselthat if we were to do this we would be breaking the law,” Reid said.

The issue is also a pressing one for Paul Dombowsky, founder and CEO ofOttawa startup Ideavibes. Last February his company launchedFundchange.com, a crowdfundingsite for non-profit causes. Nowhis firm has developed a similar social media platform aimed at equitycrowdfunding for startups.  But it can’t deploy that platformbecause Canadian law bans startups from offering equity shares or apercentage of revenue in exchange for money raised throughcrowdfunding.

“I believe the Canadian government is very behind in this and should bepushed harder because access to capital is a big issue. Making iteasier for startups to get that money is important,” said Dombowsky,who emphasized it was tough for him to get his own company going withjust $30,000 of seed money.

No Wild West wanted
Many crowdfunding sites have sprung up recently on both sides of theborder. All are careful, however, to closely straddle the line ofwhat’s legal. The Canadian version of Kickstarter.com, which raisesmoney for artistic projects like films and plays, states that investorscan receive “rewards” like copies of artistic works or “funexperiences” in exchange for their financial contributions. But it alsospells out that “offering financial incentives, such as ownership,financial returns (for example, a share of profits), or repayment(loans) is prohibited.” (Brackets are shown here as they appear on theKickstarter site.)

Launched in beta mode just weeks ago, Canadian site Springboarduses crowdfunding toraise seed capital in sectors as diverse as hospitality, publishing,music and technology. Investors can only receive “rewards” such asgifts, products or services worth a maximum of $2,000 as long as “theproject owner retains 100 per cent ownership and no debt or equitychanges are involved,” the site states.

“You have to do this with safeguards and in the U.S. they’re prettyspecific about what some of those safeguards are going to be,” he said.

The U.S. bill, for example, would cap the amount of capital a startupcan raise through crowdfunding at either $1 million or $2 million per year dependingon whether the company provides detailed financial statements toregulators. The amount each investor can contribute per year ould alsobe limited to $10,000 or 10 per cent of their annual income, whicheveramount is lower. In addition, startups would have to post warnings oncrowdfunding sites about possible risks to potential investors.

Christine Wonghttp://www.itbusiness.ca
Christine Wong has been an on-air reporter for a national daily show on Rogers TV and at High Tech TV, a weekly news magazine on CTV's Ottawa affiliate. She was also an associate producer at Report On Business Television (now called BNN) and CBC's The Hour With George Stroumboulopoulos. As an associate producer at Slice TV, she helped launch two national daily talk shows, The Mom Show and Three Takes. Recently, she was a Staff Writer at ITBusiness.ca and is now a freelance contributor.
Previous article
Malware services now professional grade, incredibly profitable
Next article
Where will Facebook spend $5B IPO money?