The Force certainly appears to be with Google Inc.

In honour of the unofficial fan holiday known even by corporate parent Disney as “Star Wars Day,” the search giant’s Trends division released a series of lists revealing Canadians’ favourite characters, movies, and even ships based on search engine results.

The top character in most provinces based on the past six months of search results, unsurprisingly, was Princess Leia Organa; while Google didn’t speculate on the reasons behind its findings, we suspect actress Carrie Fisher’s death on December 27, 2016 had something to do with it.

We’d dearly love to know why the people of Prince Edward Island are so fixated on the single most hated character in the franchise though. 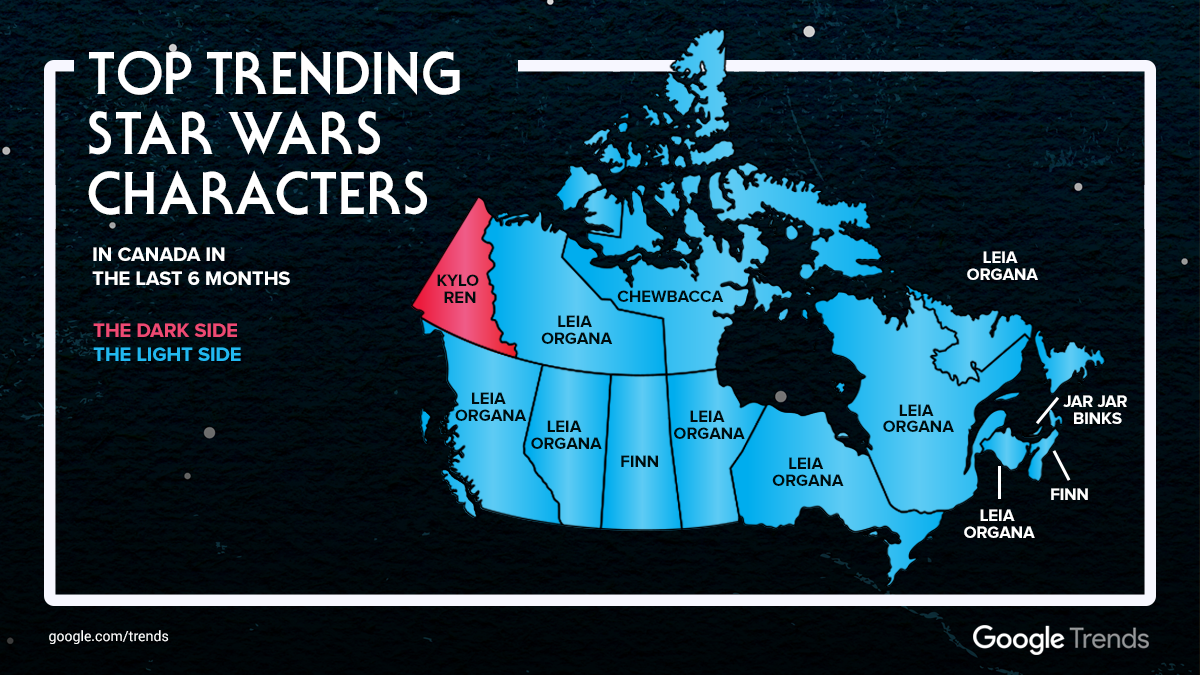 The list of top Star Wars films, based on this year’s Canadian Google searches, isn’t too surprising either, topped as it is by the next film in the franchise, which released its first trailer in April.

As older millennials, we’re glad to see the original trilogy appears to be more popular with the general public than the much-maligned prequel trilogy, however. 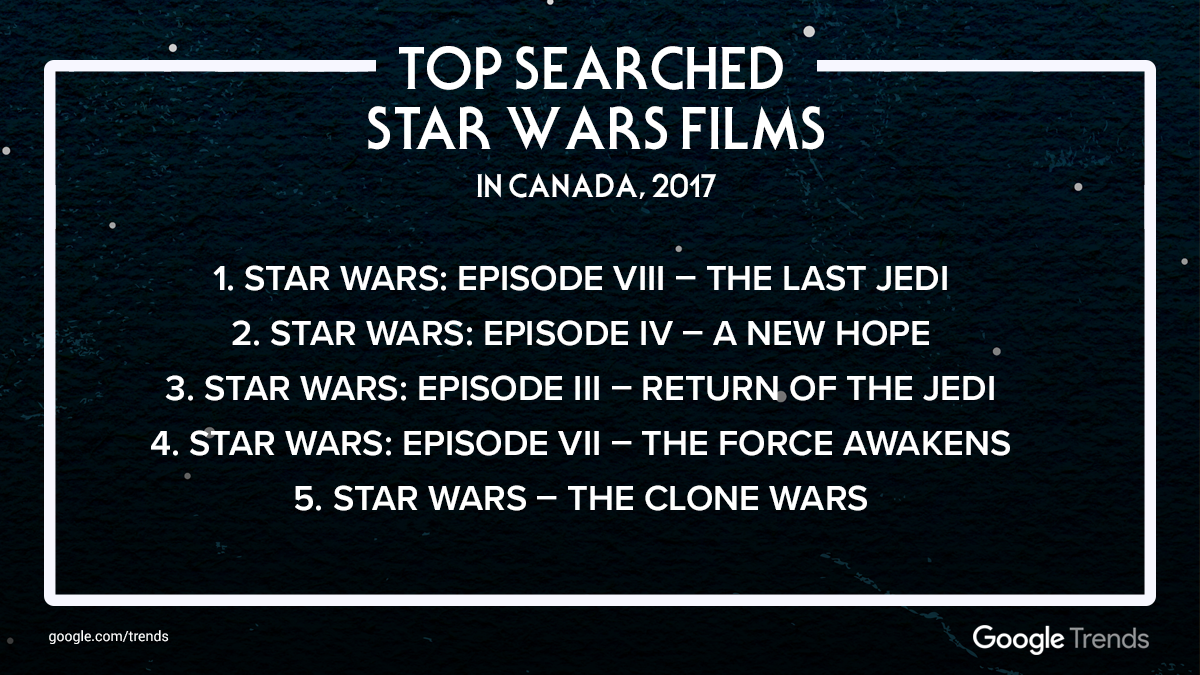 Not to mention the fact that original trilogy villain Darth Vader remains more popular than his more recent counterparts, though we wouldn’t be surprised if his role in last year’s Rogue One had something to do with that. 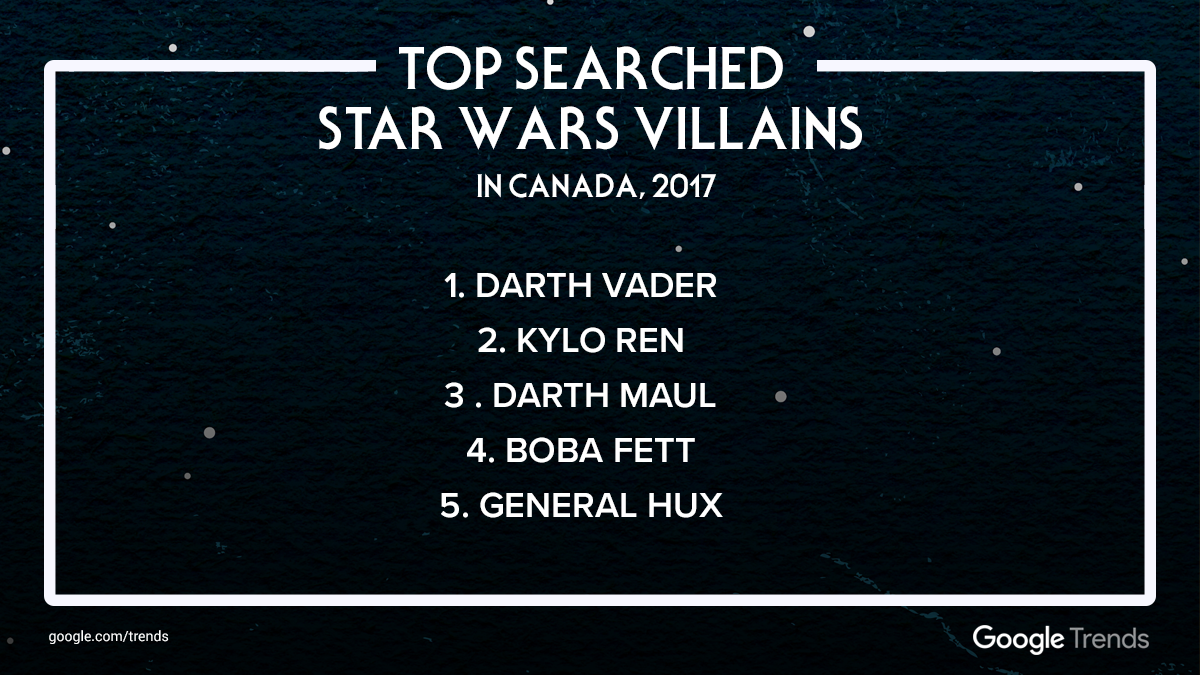 And where do Star Wars fans live? The answers, based on the past five years of search results, may surprise you; not one of Canada’s largest cities is on the list. 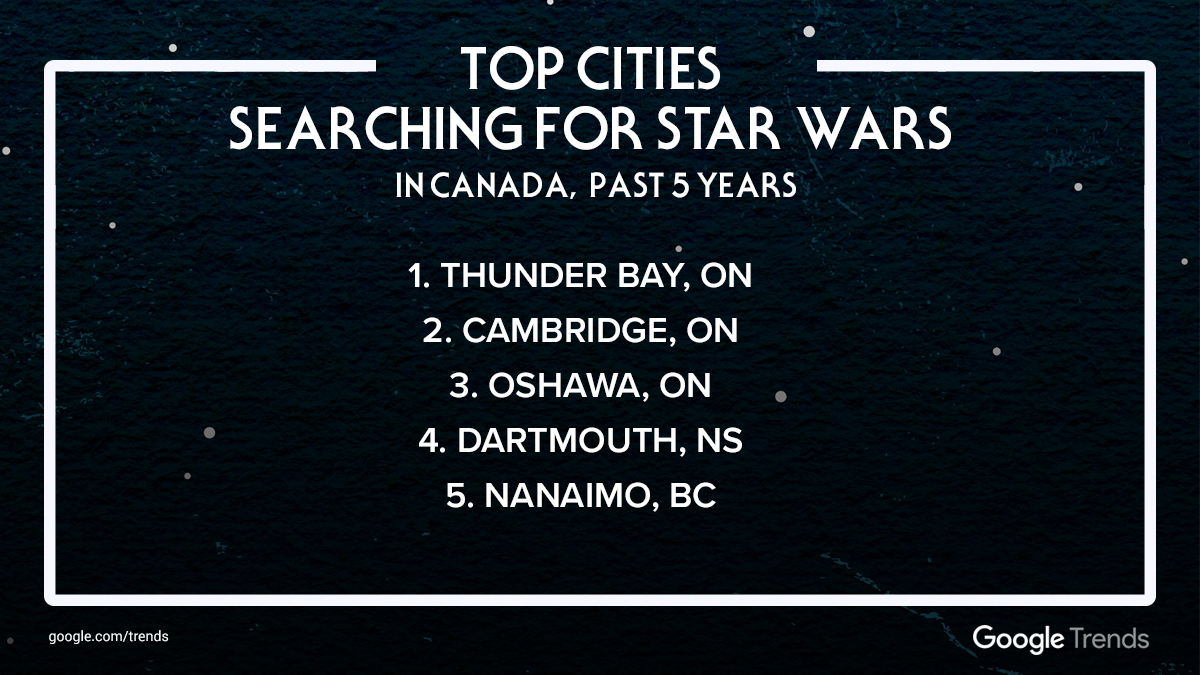 Finally, we aren’t sure why Google decided to include the top searched Jedi, spaceships, and Star Wars moments among its lists, but sure, why not? 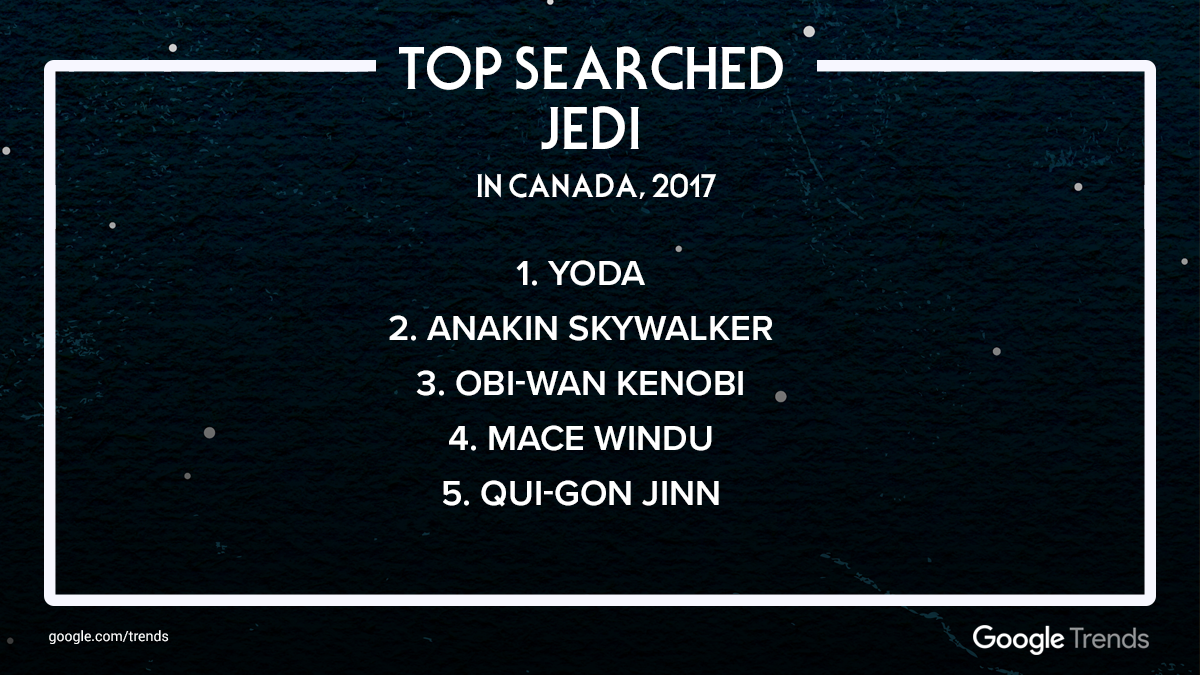 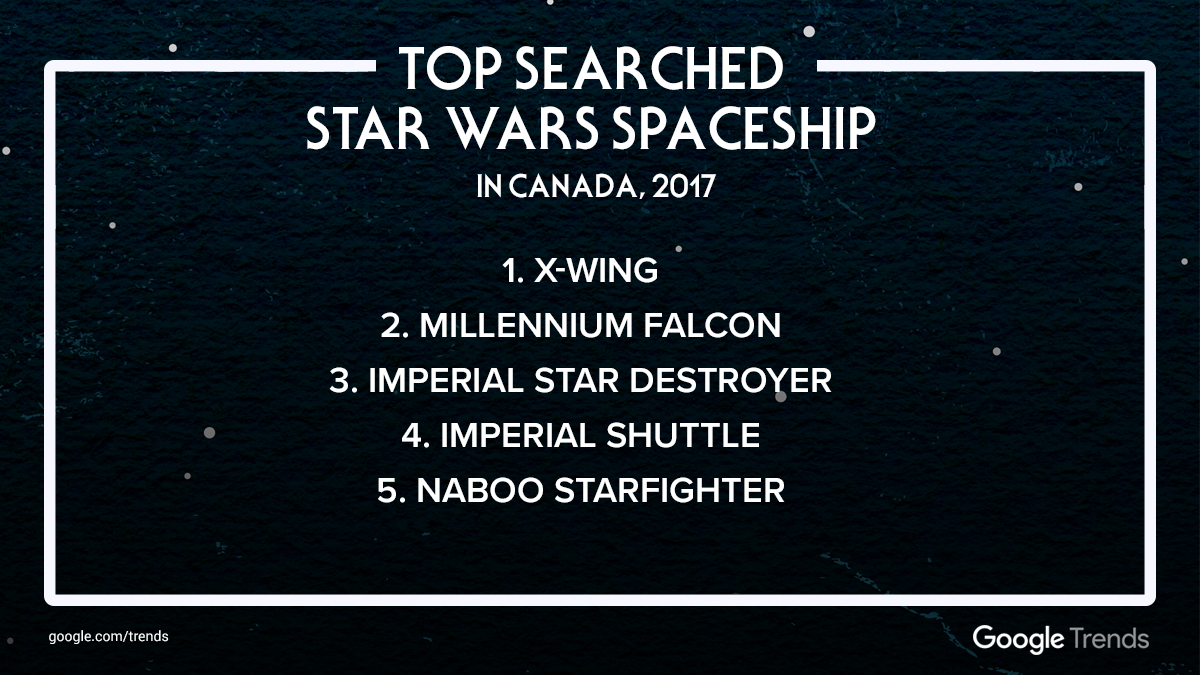 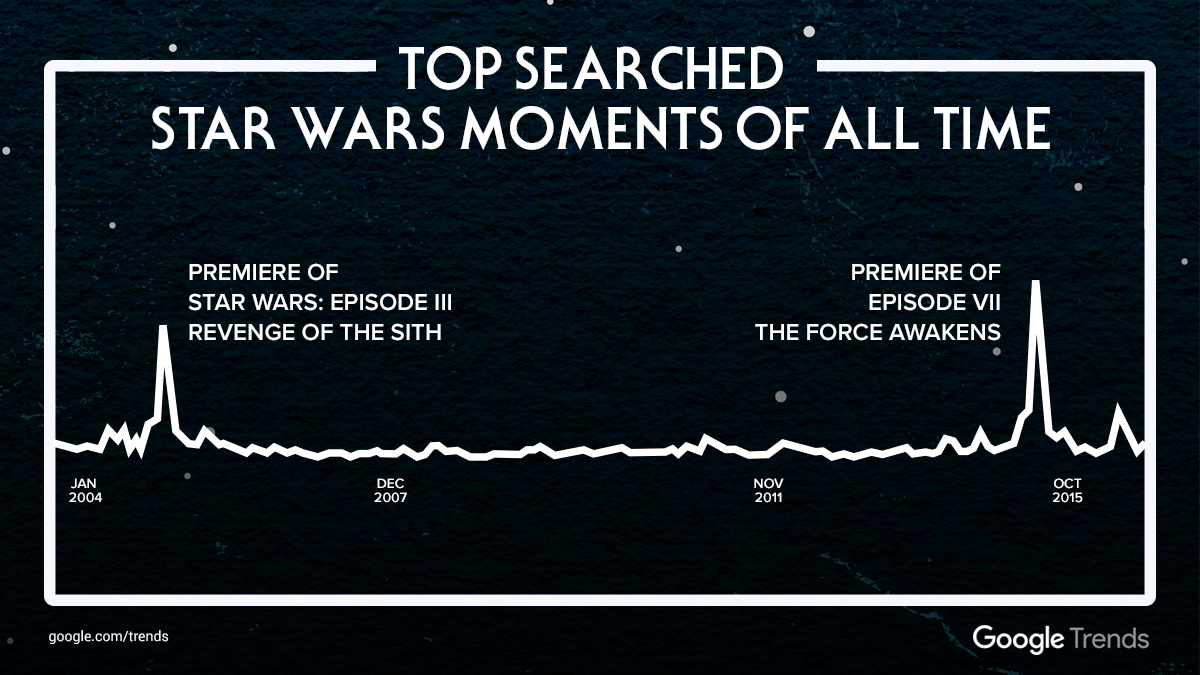 May the Fourth be with you!

Eric Emin Wood
Former editor of ITBusiness.ca turned consultant with public relations firm Porter Novelli. When not writing for the tech industry enjoys photography, movies, travelling, the Oxford comma, and will talk your ear off about animation if you give him an opening.
Previous article
Canadian fintech sector not reaching full potential: Competition Bureau of Canada
Next article
Google blocks fast-moving fake Google Docs scam