Kia Motors America is the marketing and distribution arm of Kia Motors Corp. based in Seoul, South Korea.

The company’s internal research revealed that video game aficionados are 33 per cent more likely to buy a new car in three years than non- gamers, and far more likely to be acquainted with the car’s feature sets.

Kia selected Microsoft’s XBox to do a hybrid (“in game” and “around game”) ad campaign, each channel feeding the other.

The ads got into the XBox thanks to Massive Videogame Network, a division of Microsoft that allows advertisers to do in-game ad placements and get exposure on Xbox Live, the online multiplayer gaming and digital media delivery service created and operated by Microsoft Corp. XBox Live currently has 1.4 million subscribers worldwide.

The Kia campaign was a great success from a user engagement/brand-building standpoint, according to Jeffrey Dickstein, a sales executive with Microsoft Advertising Solutions, Canada.

This impact, he said, was measured by Interpret LLC, an entertainment and media market research firm headquartered in Santa Monica, Calif.

Post ad actions measured by Interpret revealed that 32 per cent of the gamers visited Kia.com, while 47 per cent clicked through to the Kia BDE (branded destination experience) on X-Box. 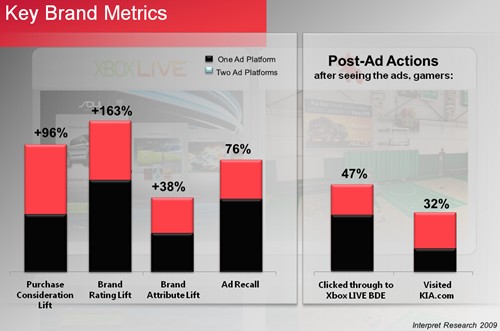 Impact of hybrid ad strategy (in-game and around game)

BDE is a microsite within the X-Box console where advertisers can showcase a brand, linking it to relevant content.

Dickstein, who spoke at the recent MIXX Canada Conference hosted in Toronto by IAB Canada, used the Kia example to illustrate the power video game advertising, and particularly a hybrid — “around game” and “in-game” – ad strategy.

He said Microsoft used firms like Nielsen and Interpret to measure the impact of such a blended strategy. “In every study, there’s a positive impact on brand awareness, brand lift, purchase intent.”

Flexibility: the name of the game

In the past, he said, advertisers had to work with publishers two years in advance to ensure their brand was in the game and fitted the context.

“Previously, you had very little control,” he recalled. “For instance, if your logo changed you had huge problems because it was hard coded into the game.” Things are very different now, and today in-game ads today offer amazing levels of flexibility and control.

“Technology,” Dickstein said, “now allows us to dynamically stream advertising into video games. As publishers, when we create the environment for a game like Atmosphere, we take slots and enable them for dynamic advertising.”

All this means advertisers can do things they never could before. 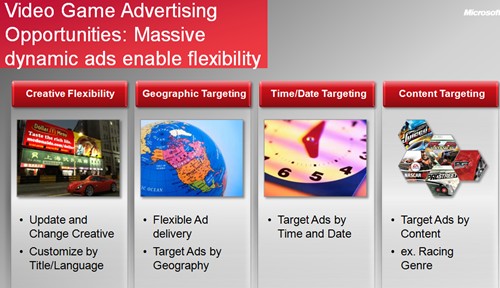 “On Monday you could be streaming a Coke ad, on Tuesday, refresh it with a Diet Coke ad. If you’re promoting a TV show you can stream an ad that says Coming Soon until the day of the show, and then finally one that says: Now Playing.”

“So if you want to reach certain people only after 11 am that’s possible. You can also align advertising with content. So if you’re going with an older demographic, we’ll put you in Tiger Woods’ PGA Tour golf video game. If you’re going after music enthusiasts we’ll put you into Guitar Hero.”

Brands can more accurately measure the impact of their X-Box in-game ads with the reporting that Microsoft provides, he said.

For these dynamic ads, a complex algorithm is used to calculate ad impressions.

To illustrate how impressions are calculated Dickstein showed a demo video of the ad for McDonald’s Dollar Menu inserted into the Spider-Man: Web of Shadows game at various locations where Spider Man does dare devil stunts. 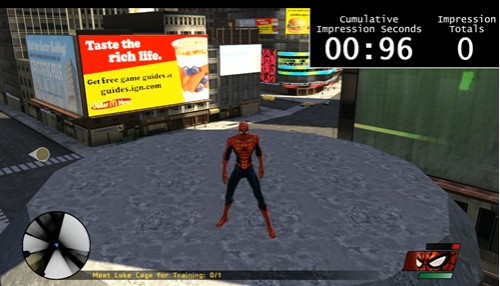 “The ad has to be on the screen for a certain amount of time,” Dickstein said. “There’s a ratio between the billboard and the screen, the angle has to be just right. Every 10 seconds counts as an impression.”

He said the software cumulatively counts the 10 second intervals and then pings the server.

In-game ads, he said, could be run in various game categories, depending on the audience the brand wants to reach.

Some people are interested in reaching all gamers, so they’ll do an ad across categories, but brands could also choose specific categories – Sports, Racing, Action Adventure or Entertainment titles – to publicize their messages.

Or placement can be done by the target group’s sensitivity to violence, only putting the ad in titles rated “Teen” or “Everyone.”  (These video-game ratings are assigned and enforced in Canada and the U.S. by the Entertainment Software Rating Board or ESRB).

“We can provide you with the report card that has information on why a game is Mature rated or Teen rated, for instance. It’s good material when you’re talking to your clients.”

Around the game in 80 ways

How does an advertiser get their messages into the X-Box without being tied to a particular game?

The answer, said Dickstein, is “around game” advertising.

“When you turn on the X-Box, in the opening screen you see this dashboard, and spots on the dashboard that effectively serve as [information] channels.”

These “channels” he said update the gamer on what’s hot, what’s up and coming in the industry, contests, promotions et al.

“We’ve reserved a couple of these spots for advertisers like you,” Dickstein told the MIXX audience.

He said advertisers have a bunch of options to showcase their creative in a relevant way.

“You can have it so when someone clicks on a spot, it opens up a streaming video, offering them the full HD big screen experience. Another option is the click leads them to a BDE (the micro-site within the X-Box).”

He said luxury car manufacturer Porsche used the around game advertising strategy to showcase its brand.

“They realize many people can’t to afford a Porsche and it’s an aspirational car. But they wanted to show off their car inventory, and link it to a contest.” 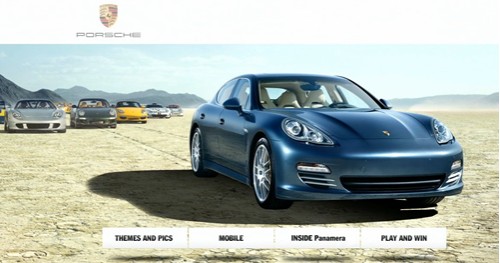 So they used one of the spots on the X-box dashboard to advertise a “play and win” contest and offer the gamer an opportunity to download free content.

Clicking on the spot took you to a BDE (microsite) where you could take part in a “Game with Fame.” It required you to “friend” American race car driver Hurley Haywood on your X-Box live.

“The one with the highest score would win a trip to the Porsche driving school in Birmingham, Alabama where they could race their car.”

“There was also a mobile application,” Dickstein said. “You could go up to the TV, take a picture of the “mobile tag” with your phone and get a free Porsche ring tone.”

He said play and win contests are popular with gamers and advertisers have many options here, depending on the their brand and target audience.

“For instance, if a brand wants to associate itself with a music game – the incentive could be: play Rock Band and win tickets to a concert.”