Joy is bad for business, and other insights from Unbounce’s deep dive into consumer emotions

Joy might be the ideal emotion to spread in real life, but when it comes to advertising it can actually be a detriment, according to a report by Vancouver-based Unbounce.

Back in March, the overlay platform developer and marketing service provider conducted a comprehensive study that analyzed the patterns of over 74 million visitors to 64,284 landing pages across a variety of industries – and found, among other insights, that words conveying joy lowered a campaign’s conversion rate by up to 40 per cent; that copy written at a sixth-grade reading level enjoyed twice the conversion rate of copy written at a university level; and that messages with 750 words had a 30 per cent lower conversion rate than messages with 500.

Unbounce CTO Carl Schmidt admits that it’s difficult to say why, exactly, words that indicate joy would have such a negative aspect on conversion rates, noting that all the data indicates for certain is a correlation, and that the company plans to follow up its study with another testing causation.

“I actually had a really hard time with that one, because I was like – ‘Wait, too much joy is a bad thing?’” Schmidt says. “My hypothesis is that too many words indicating joy takes away their credibility and comes across as hyperbole, and therefore lacks authenticity. People go, ‘This is too good to be true – you’re sugarcoating it. It can’t be this good,’ and walk away.”

Whether correlation indicates causation or not, the results of Unbounce’s study, which it called the Conversion Benchmark Report and released on March 29, offers marketers plenty to chew on.

For example, the company found that landing pages in the home improvement and online education sectors which incorporated words indicating joy into more than one per cent of their copy (ex. “safe,” “friendly,” “clean,” “comfort,” “excellent,” “happy,” “success,” and “confidence”) experienced conversion rates up 40 per cent lower than the competition. 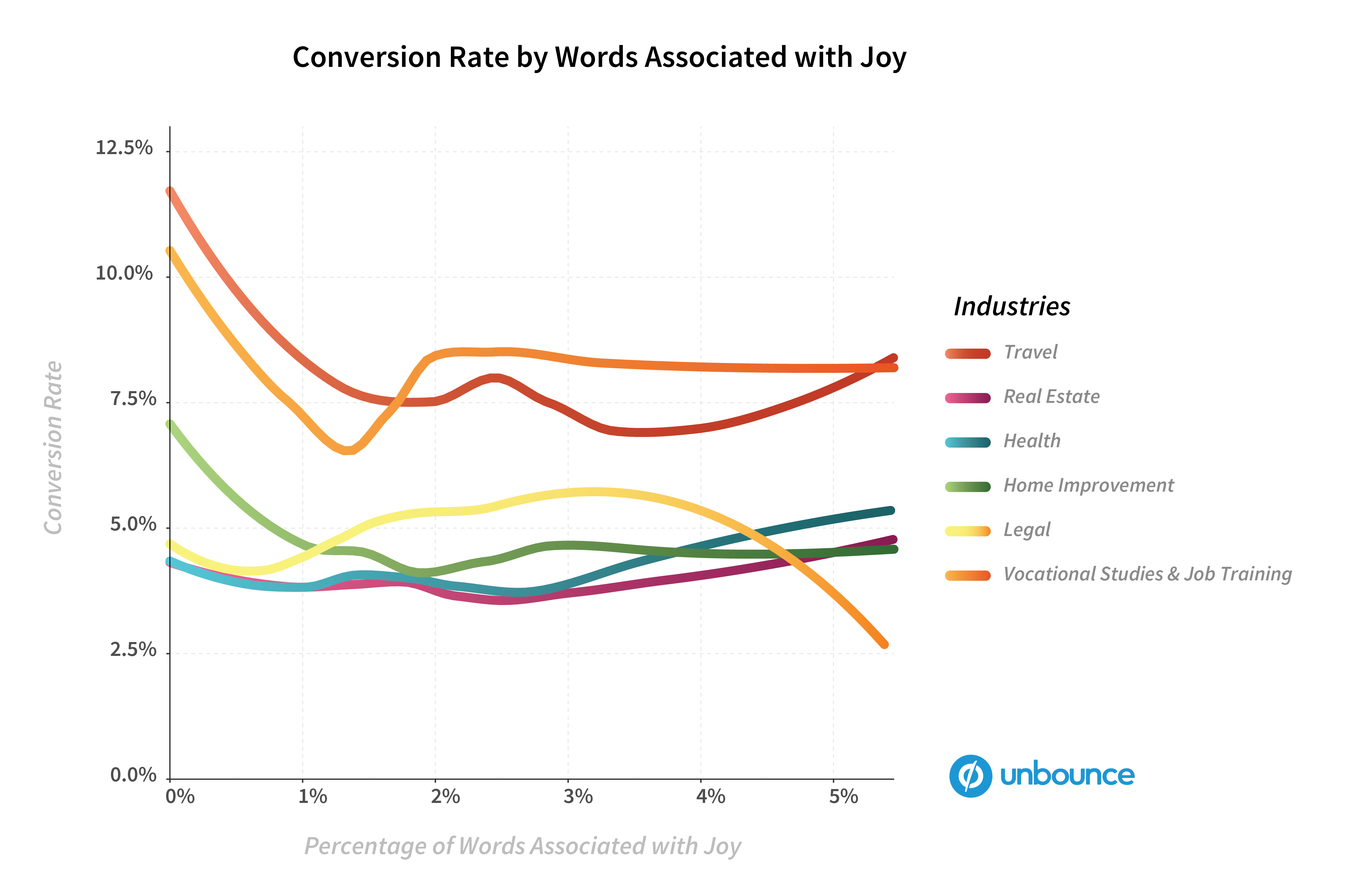 Before marketers start dreaming up ways they can use copy to scare customers, however, Unbounce also found that fear-inducing words such as “problem,” “risk,” “difficult,” “emergency,” “change,” and “worry” can have a negative impact of up to five per cent on conversion rates, while trust-enhancing words such as “leading,” “team,” “policy,” and “powerful” can actually have a positive impact of up to five per cent.

It’s the latter result that might feel most counterintuitive to marketers, Schmidt notes: “As a copywriter thinking about how to communicate your message, you might not think fear could be a conversion hindrance, because honestly, you can scare people into action.”

The effect was found to be more pronounced in some industries than others: for example, the use of fear-driven words on landing pages in the credit and lending industry (ex. “bankruptcy,” “court,” “problem,” “bad,” “change,” “risk”) decreased conversion rates by up to 15 per cent.

Some of these results present a dilemma for some of the industries studied, Schmidt acknowledges, since some of those phrases are exactly what you might expect to read on a page associated with the credit and lending industry.

“Marketers in those industries need to be careful about not emphasizing what we call ‘trigger’ words too much, or finding alternate ways to get their point across without necessarily leaning on them,” he says. “If nothing else, our study helps inform them how much specific words drive emotional impacts in visitors.” 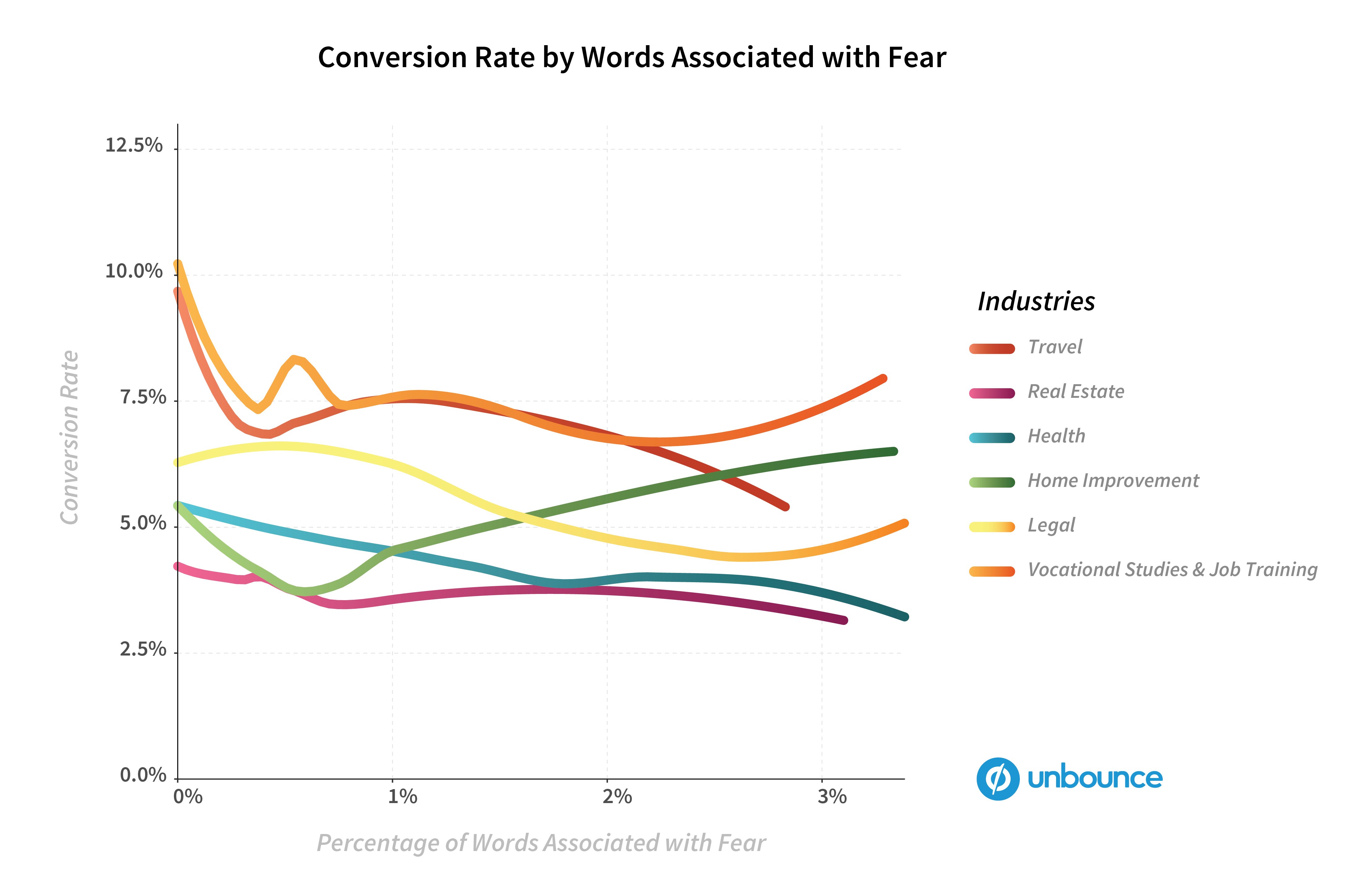 However, this did not hold true for four of the ten industries studied, such as higher education.

“It’s really about communicating your value quickly, simply, and appropriately,” Schmidt says. “In a lot of verticals, we found the sixth-grade reading level was most effective at getting your point across – with the corollary that if you were speaking to a more sophisticated audience, a higher reading level was required to explain what you were doing.”

Predicting conversions with 80 per cent accuracy

To conduct the study, Unbounce’s data science team analyzed the behaviour of exactly 74,551,421 visitors to 64,284 lead generation landing pages created by the company’s clients using its landing page builder over a 12-month period, limiting their dataset to English-language landing pages that received a minimum of 10 visits during the fourth quarter of 2016.

Sentiment was measured based on the quantity of positive, negative, and/or neutral words on each landing page, while eight basic emotions (anger, anticipation, disgust, fear, joy, sadness, surprise, and trust) were measured using an Emotion Lexicon.

The words highlighted by the company’s final report are no accident, Schmidt emphasizes, noting that the company laboured over which words to choose.

“Having insights into how certain words are perceived by your audience is incredibly powerful, because it can save you so much time in the copywriting process,” he says.

“In the end, it turned out we could just use words to predict conversion rates with 80 per cent accuracy.”

Eric Emin Wood
Former editor of ITBusiness.ca turned consultant with public relations firm Porter Novelli. When not writing for the tech industry enjoys photography, movies, travelling, the Oxford comma, and will talk your ear off about animation if you give him an opening.
Previous article
Smartphones the next big machine learning platform, Deloitte says
Next article
One final question for ex-Cisco Canada president Bernadette Wightman