Adoption of Joomla!, the open source content management system (CMS) for Web sites, grew 40 per cent over the past year to surpass 30 million downloads off the software.

The organization announced the landmark download count this morning, also saying that its CMS is used to 2.7 per cent of the Web. The downloads of Joomla grew from 22 million in March 2011, and the actual number of downloads is higher than the count since the organization started counting in 2007, and the software has been available since 2005.

According to a W3Techs.com survey also released today, Joomla is the second most-used Web CMS next to WordPress. WordPress dominates the CMS market, being used by 53.8 per cent of all CMS users, while Joomla is used by 9.2 per cent. Drupal is in third spot with 6.7 per cent, vBulletin is fourth with 4.1 per cent, and Google’s Blogger rounds out the top five with 3 per cent. 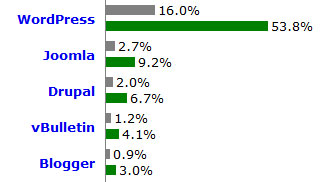 Joomla is used to run everything from personal Web sites to small business sites to large enterprise Web sites. Many large corporations rely on it to operate their intranet systems, including McDonald’s, Sony, General Electric, and Harvard University. The core CMS is complemented by a library of more than 9,000 extensions that add more functions.

Joomla is an open source development project that has been contributed to by thousands of coders over the years. It’s a project of Open Source Matters Inc., a non-profit organization. The CMS has recently committed to updating its software every six months, and version 2.5 is currently available.

There are several user groups dedicated to the open source CMS in Canada, including in Toronto, Montreal, and Okanagan B.C. The groups typically meet monthly to hone their Joomla skils.