Apple Inc.’s mobile eco-system might be more divided than is commonly assumed, according to device data collected by software developer Apteligent Inc.

While Apple is thought to have the best success in the industry in pushing out its latest updates to its millions of users, the analysis by Apteligent shows that about one-fifth of iPhone users hadn’t updated to the latest stable release of version 9.3.2 as of July 4. Here’s a table showing the breakdown for various versions of iOS: 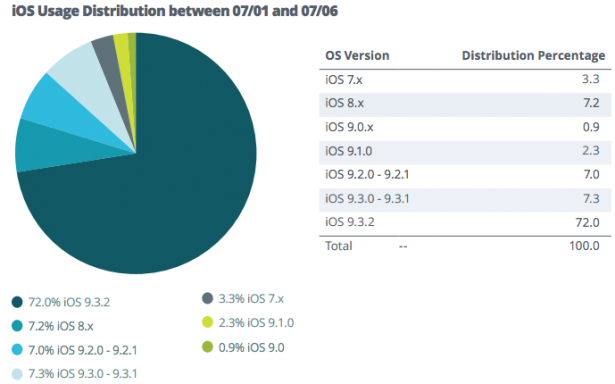 The numbers suggest that at least some users may be tiring of keeping up with the frequent updates issued by Apple to patch iOS, Apteligent says. “Since iOS 9.0 was released, Apple has pushed eight updates and has a ninth currently in beta. This is all in the span of less than 10 months.”

Apple does still have the edge over Android when it comes to pushing out a new OS. It bypasses carriers to manage pushing its own updates and it also doesn’t have to rely on other hardware manufacturers to adopt a new version of its software, the way Google must. 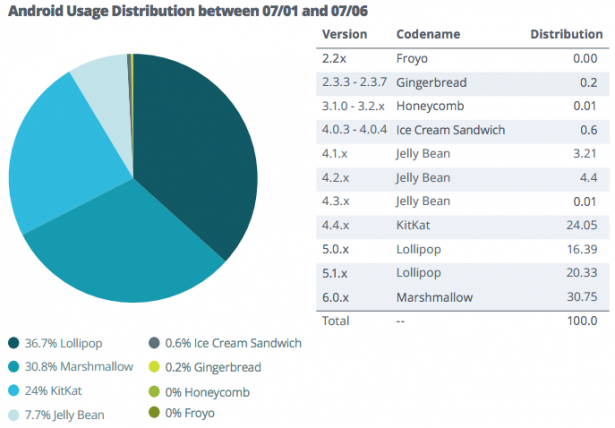 The kicker is that laggards using older versions of iOS are missing out on improved performance from their devices. Apteligent’s data shows that compared to iOS 8, the latest version of iOS crashes 27 per cent less often. About 70 million iPhones around the world are still running the dated iOS 8, Apteligent estimates.

With iOS 10 currently in beta, if Apple wants to maintain its high adoption rate for new OS releases, it may choose to spend more time testing the software to try and avoid releasing a series of patches as it has done for iOS 9.

The number of actively used apps for Apple Watch peaked at the end of last year just after the release of the smart wearable. It’s been trending slightly downwards since then, though Apteligent didn’t put a number on how many apps were active.

“The early and late majority have been waiting for Apple to fix issues around battery life and performance,” the report says. “There are also concerns about the Watch’s ability to differentiate beyond a fitness tracker.”

Look for another bump upwards from developers if Apple unveils a strong sequel with the Apple Watch 2 announcement anticipated for September.

Brian Jacksonhttp://www.itbusiness.ca
Editorial director of IT World Canada. Covering technology as it applies to business users. Multiple COPA award winner and now judge. Paddles a canoe as much as possible.
Previous article
MasterCard offers new details about Canadian MasterPass release
Next article
How to ensure Pokémon doesn’t make your workplace productivity Go down