Demoed products ranged from laptops mainly targeted at consumers, such as the Satellite A660-042 3D, to the Toshiba Tecra R700 designed specially for business customers.

Then there were other devices – some as yet in prototype phase – that showcased shiny new Toshiba technologies.

For example, media persons were given a preview of the ultra-compact Libretto W100 dual-screen PC. Right now this is still a proof-of-concept device and will be available in limited quantities in Canada early August.

Toshiba product managers say later versions of the W100 could incorporate some significant changes, depending on post-launch feedback.

3D on your laptop

The Blu-Ray format A660-3D laptop was the showpiece of the entire shebang – for obvious reasons. It’s the first notebook PC that allows users to watch content in Blu-Ray 3D.

The notebook’s features are pretty impressive.

Donning the active shutter LCD glasses — that come with the machine — I briefly checked out a video game (Batman: Arkham Asylum), as well as short snatches of a 3D Blu-Ray movie title.

Toshiba itself seems to be positioning the laptop as the ideal 3D gaming device.

“We think 3D technology is more for the gaming industry [than for] movies,” said Graham Anderson, product trainer Digital Products Group at Markham, Ont.-based Toshiba of Canada Ltd.  “That is where the market is going. There are around 400 3D game titles available right now. Most future titles released will also be 3D capable.”

Of course, one reason for this assertion could be Toshiba’s awareness that it’s tough to get consumers all excited about watching 3D movies on a laptop.

For many, a 3D film minus a big-screen is like a hot dog without the mustard and relish.

But when it comes to 3D gaming … that’s a different story. Here consumers more ready to accept a smaller display.

Realizing the potential in this space, major video game console manufacturers are beginning to get into the 3D act.

At the E3Expo in Los Angeles earlier this month, Nintendo previewed the 3DS,a portable system that lets people view games in 3D, without special glasses.

Nintendo also announced a pretty impressive list of upcoming games for Nintendo 3DS, the Wii console and the Nintendo DS family of systems. 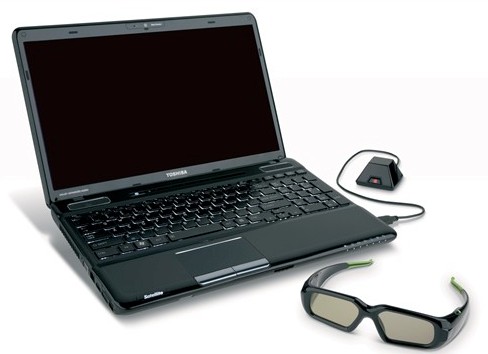 If 3D takes off on consoles, then why not on laptops?  Toshiba is counting on the fact that it will – and hopes to be a trend setter with the A660-3D.

Of course, with its fairly high-end specs (i7 processor, 640 GB of hard drive space, raised-tile keyboard and face-recognition technology, which can be used to log on securely to the notebook), it’s more than probable that for many users this laptop would also function as a hybrid platform.

The A660-3D (there’s also a non-3D version) comes equipped with a Blu-Ray player, so users can watch their favourite Blu-Ray flicks in high-def.

The unit is equipped with an Intel Core i7 processor, which offers the processing juice needed to handle fast 3D rendering.

A Toshiba promo video on the Satellite A660 3D suggests users will be able to connect future versions of the notebook to a 120Hz HDTV and enjoy their 3D content on the big screen.

At any rate, this isn’t something available right now.  “You’ll have it in the future,” Anderson told ITBusiness.ca. “What we’ve accomplished is the output through HDMI to a 120Hz TV. It gave us the “blue and red” 3D. So if we had – not the active shutter glasses – but the blue and red glasses, we’d be able to watch it on the [3D] TV.”

Quite apart from 3D, one key feature of this notebook is its home networking capability best experienced through the use of Toshiba Media Controller, a proprietary Toshiba application that comes pre-loaded with the machine.

The A660-3D runs the Windows 7 Home Premium operating system (as do all of Toshiba’s newer laptops).

All Windows 7 PCs are DLNA complaint, so even without the Toshiba Media Controller, file transfer to other DLNA devices would be possible. However, the value-prop of the Toshiba Media Controller emphasized by the firm’s product managers has to do with simplicity and ease of use. I did experience both during the demo of the A660 by Toshiba’s Anderson.

Set up is simple.  When you start Media Controller, you’re asked if you want share your media. If you click “Yes” you’re up and running.

The right side of the application screen shows you a list of DLNA compliant devices on your network – for instance a TV, or other PCs.

The left side displays media media residing on the laptop under various categories – for instance, Video, Photos, Music. 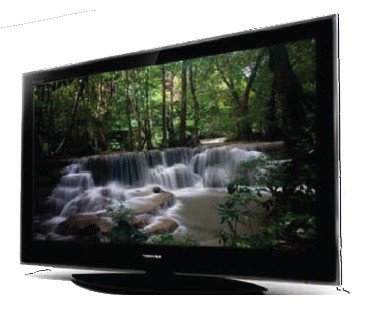 To send an image from the laptop to the TV, you just select the image and click the add button. Or simpler still, click and drag and drop the image icon from the left column to one of the devices to the on the right hand column.

When Anderson did this, for instance, the image immediately popped up on the Toshiba Regza 46UX600 LCD HD TV that was part of the demo set up.

The same drag-and-drop feature can be used to transfer video. Users can also create a playlist that could include disparate media files – for instance, a movie, some pictures and a few music tracks.

The Regza 46UX600 is a wireless TV. A Wi-Fi dongle, included in the box, fits into the TV’s second USB port.

One drawback of the 46UX600 is that it currently doesn’t support 802.11n, the latest and fastest Wi-Fi standard – but is compatible with the 802.11b and g flavours of the standard. This means folk with 802.11n networks at home won’t be able to take advantage of the significantly greater router speed.

Anderson says, at a practical level, this doesn’t make much of a difference.

“I’ve been able to push high-definition video [from the laptop to the TV],” he said. “The only drawback is if I want to push a hi-def video to one TV and a song to another one, there may be some lagging issues.”

He said a key advantage of the Toshiba Media Controller is it enables you to send media files to up to 7 DLNA-compliant devices at once, and create a separate playlist for every device.

And it also works the other way.

Not only can you send files from the A660 laptop to your TV, but from the TV, using the remote, you can access files resident on your laptop.

The process is similar. You open up the Media Player feature on the TV, go to one of the categories (Photos, Movies and Music). From there, to access images from your laptop (for instance), you select the Pictures file, go to All Pictures and it will “pull” all the images stored on your laptop and display them on the TV.

“I’ve been able to play the video at 720p HD. I’ve been told you can go up to 1080p, but personally haven’t been able to accomplish that,” he said.

Tecra R700 – how a hot laptop keeps its cool

If the A660 is positioned as Toshiba’s premium entertainment notebook for consumers, the Tecra R700 is company’s quintessential business laptop.

Interestingly, from a hardware specs standpoint the two notebook categories aren’t very different. Both are equipped with either Intel i3, i5 or 17 processors, both come with 4GB of active DDR memory, and so on.

The Tecra’s selling point, however, lies in its ergonomics. For a business notebook it is exceptionally light (weighs just 3.1 lbs).

Toshiba exec Steve Wong says this has been accomplished without compromising performance.

“Typically, to have that light a laptop you would have to make some concessions in hardware specs,” noted Wong, product manager, commercial notebooks, Toshiba Canada. “But we wanted to offer business customers what they’ve always wanted – a truly portable, full-performance notebook.”

So Toshiba engineers put in a standard voltage CPU, but worked with Intel to develop a new Air Flow cooling technology.

“It places the CPU and other components that generate a lot of heat into the same space at the bottom on the laptop. An intake fan cools all those components and the hot air is conducted out – via a pipe – through exhaust slots at the side of the notebook.”

As all the heat is localized in one area and then exhausted out, every other area of the notebook remains cool, Wong said. “That’s the reason why it’s able to run i5 and i7 processors.”

The laptop has a magnesium-type casing, which seemed sturdy enough.

“We know people will often carry it around with one hand. So we put in a honey comb palm rest (just below the key board). It’s very durable and won’t break even if you put your weight on it.”

This machine is equipped with have a docking station with USB 3.0.

The R700 won’t have a Blu-Ray player on launch. “But it’s a feature refreshes of this model may contain,” Wong said. 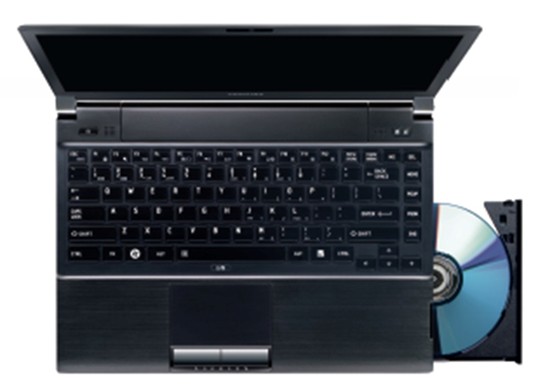 The laptop also has Toshiba Media Controller built into it, and with its impressive hardware could also be used in a home networking environment.

Wong said while the laptop can be ordered online now on the Toshiba site, it will only be available in the second week of July.

“You could get it from the online sites of retailers, such as Best Buy, and could also walk into a Staples store and buy off the shelf.”

How Google is rewiring your neural circuitry for distraction