Internet Explorer 9 — the upcoming version of the popular Web browser from Microsoft — might adhere to internationally-agreed upon Web coding standards.

But that still doesn’t mean it treats code the same way as most other browsers.

The latest full-version release of Microsoft’s popular browser is still in the early stages of development.

Currently the third tech preview release for developers is available for download. It’s already clear the release will be the largest jump in browser technology since the release of IE6. It adds support for advanced HTML5 elements such as direct-embedded video and audio, and it takes advantage of computer hardware more than previous versions did.

The “platform preview” is intended to offer developers plenty of lead time to get Web applications ready for the release of IE9, says Barnaby Jeans, a technology evangelist with Microsoft Canada. It also showcases enhanced features of the browser.

“It will reset people’s expectations about performance when it comes to surfing the Web,” he says. “It’s the first browser that takes advantage of the power of the machine and the power you have sitting on your desktop.” 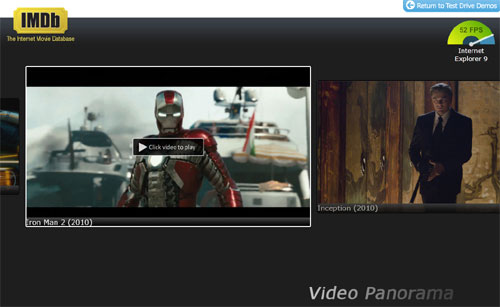 IE9 taps hardware acceleration by using a computer’s graphics processing unit (GPU) to offload work from the CPU. Everything from text, images, and vector graphics are rendered with the GPU.

But Web programmers may still find themselves coding two versions of every page — one version for other browsers such as Mozilla Firefox, Google Chrome and Apple Safari,  and another for IE users… [Next Page]

“I’m incredibly frustrated as a programmer,” he says. “It feels like I have to design a completely separate site for Microsoft.”

Microsoft is a member of the World Wide Web Consortium (W3C), the standards organization the Web founded by Tim Berners-Lee. W3C standards will be supported by IE9, Jeans says. Acid 3 tests ensure a browser is compliant with standards.

“Our focus is supporting standards that exist in a formalized way,” Morrison says. “We want to make sure we’re doing as well as we can on the tests.”

But one page he is coding passes a W3C validation service with zero errors. That’s more than can be said for the two most-visited sites on the Web, Facebook and Google that score 41 errors and 37 errors respectively.

Still, the page doesn’t look quite right in IE9. The mouse-over menu graphics don’t work, and the drop-down menus activated by a click also don’t behave properly. The errors will cause Morrison to use CSS to do mouse-overs for users of other browsers, but use jQuery (a JavaScript library) instead for users of IE.

There may be other oddities in the way IE calculates the space around divs, Morrison says.

“If we’re talking about syntax in terms of what attributes and tag names are acceptable, that I’m sure they are following the standards for,” he says. “As far as the calculations go, I’m not sure if that’s even covered by W3C… [Next Page]

Still, IE9 boasts a lot of impressive features and the handling of HTML5 tags on the tech preview site looks good. The Internet Movie Database has built an HTML5 movie trailer slideshow with the new video tags. It allows viewers to slide through a horizontal strip of trailers, and play them on the fly. 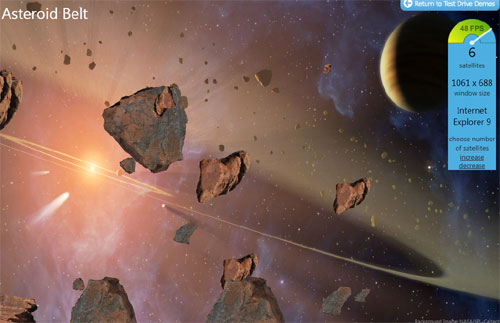 An asteroid flies through space in this demonstration of tags.

HTML5 will provide to developers everything they need to create rich Web applications in one environment, Jeans says.

“It becomes a lot simpler to say that you an build your application using one mark-up language,” he says. “We want to layer on what we can offer in ways that don’t change the standards and don’t require an extra plug-in, it’s just part of the browser.”

Popular Web plug-ins — such as Adobe Flash and Microsoft Silverlight — won’t go away, or be replaced in every scenario, the evangelist says. But developers will have more options.

Those cut out of the loop are Windows XP users, as IE9 won’t support it. Users with older hardware might also see performance take a hit when using the souped-up browser.

Microsoft hasn’t set a clear schedule for when IE9’s beta will be released or a full version will become available, Jeans says. The platform previews have been released every eight weeks so far.

Morrison’s advice to Microsoft on how they can improve the browser before its official release is simple.

“Look at the other browsers,” he says. “Four out of the five major browsers are doing it this way, so why aren’t you?”

Welcome to the new ITBusiness.ca!