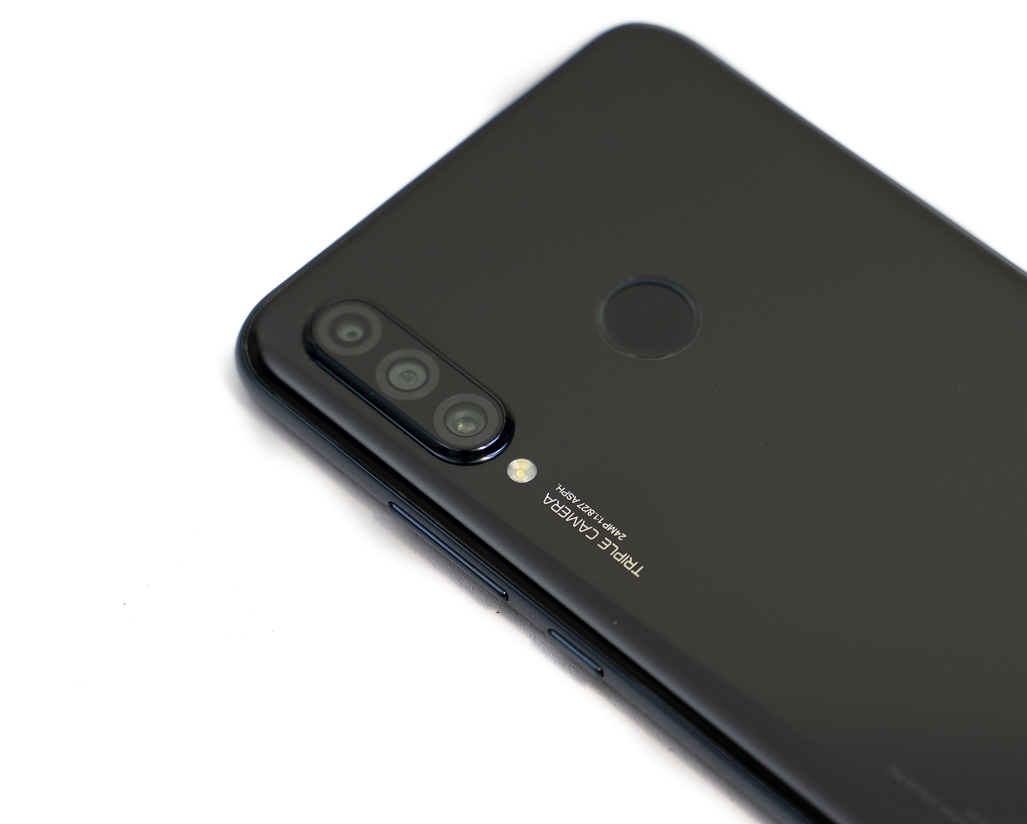 The Huawei P30 Lite has a number of praise-worthy features. With a spacious storage capacity, decent display, glass shell, and triple cameras, it makes a strong case for Huawei’s midrange. With that said, it had to compromise on battery life and settle for a chipset that struggles to perform when met with heavy apps. Although it retails for $470, you can easily find the international version (which is compatible with Canadian carriers) for around $400. At this price, the P30 Lite dips into the budget line, and should be a no-brainer for anyone looking for a value daily driver. 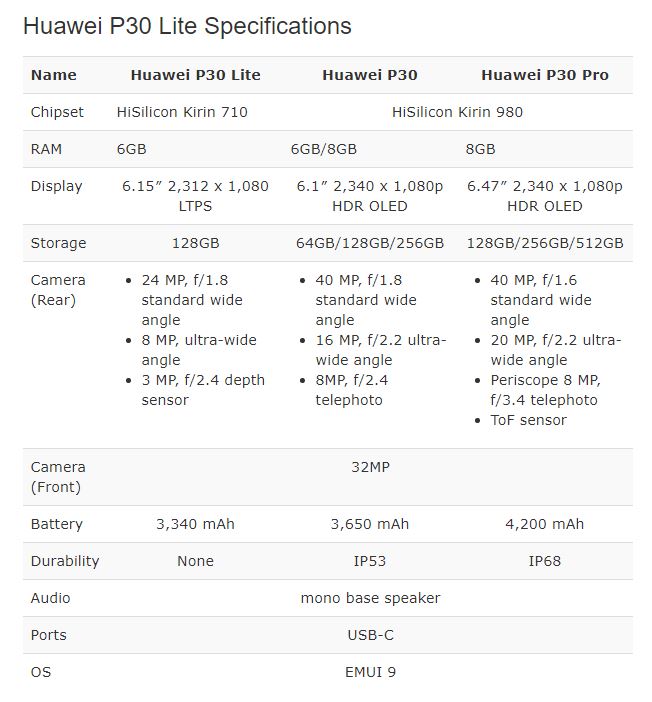 Beside’s the glossy plastic band, the entire phone is crafted out of glass, giving it a much more impressive feel than its price point suggests.

All Huawei P30 Lite comes with a pre-applied plastic screen protector. As much as I appreciate Huawei’s efforts, I’d much rather see an included case. And what’s the point of keeping the display immaculate, anyway? Who’s really going to buy a used 2019 phone in two years? 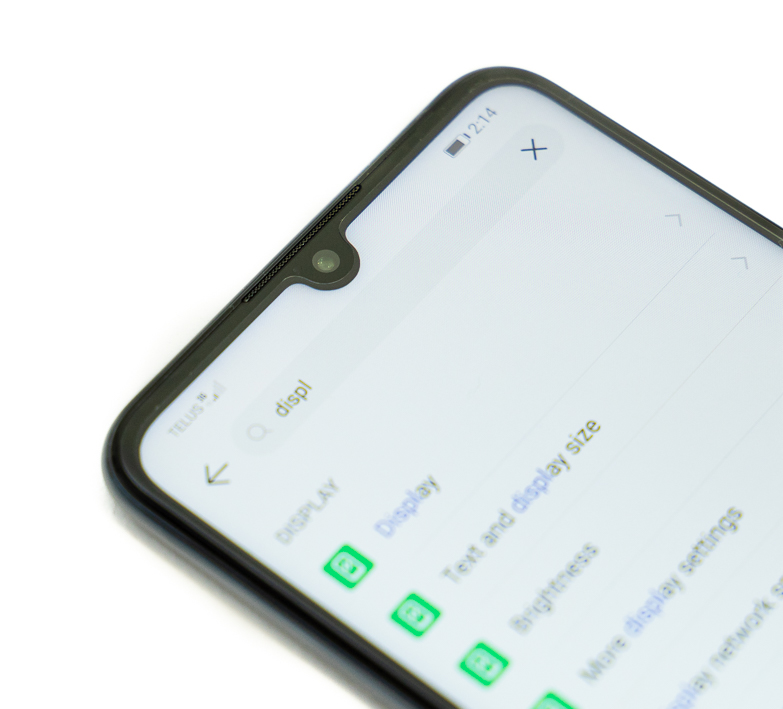 All buttons are condensed to the right, which only consists of two razor-thin volume buttons and the power button. 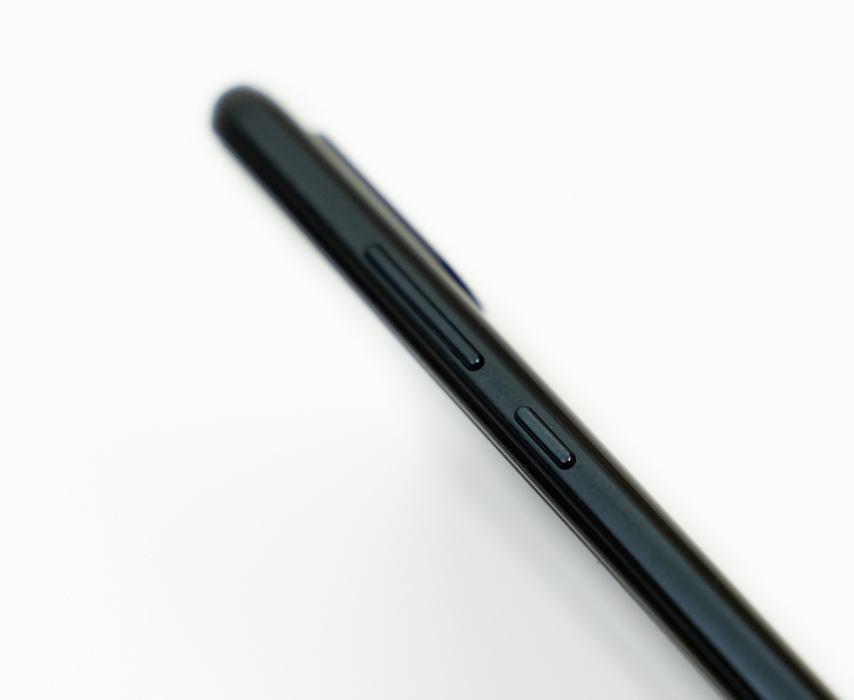 Embossed at the center of the rear casing is a dedicated fingerprint sensor.

Unlike the flagship P30 Pro, the P30 Lite has a pronounced bezel encircling the display, which reduces ghosts swipes, but mars aesthetics. 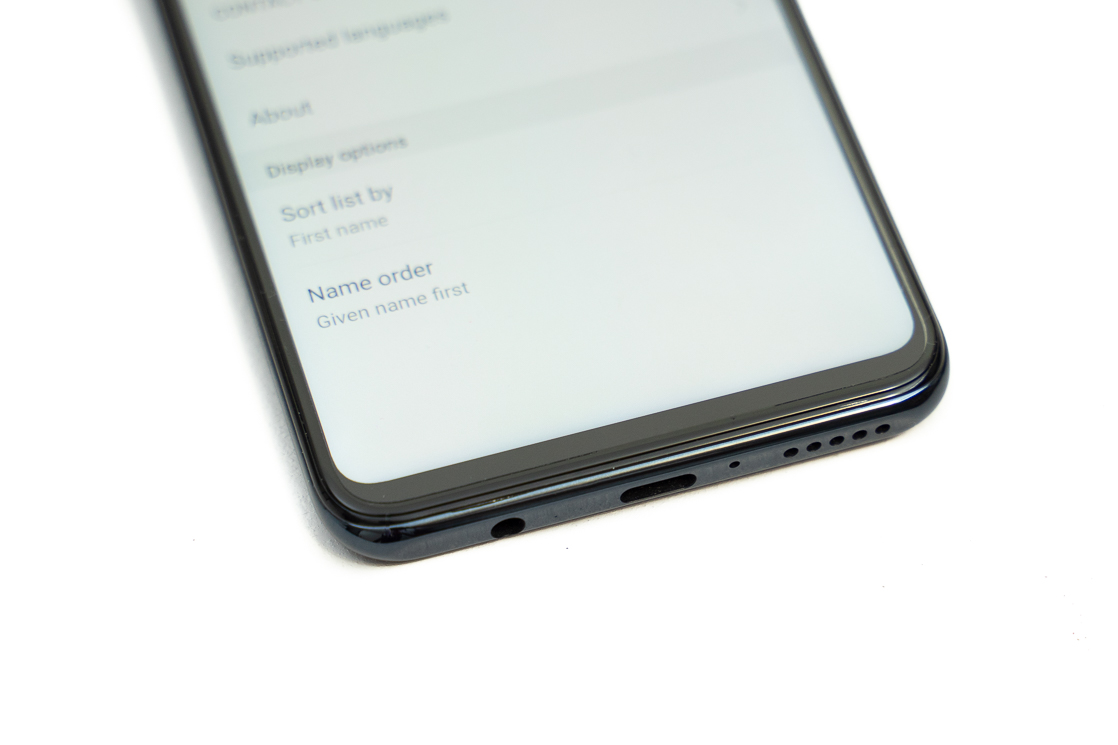 The tiny front camera sensor carries an impressive 32MP resolution. It works very well, and supports facial recognition. Although, without a proper depths sensor, it can only scan a 2D image and is therefore prone to spoofing using a picture of a person’s face.

Because people looking in this category are likely to have wired headsets, our old friend 3.5mm headphone jack makes a triumphant appearance. A USB-C port and an underwhelming mono speaker sits in its parallel. 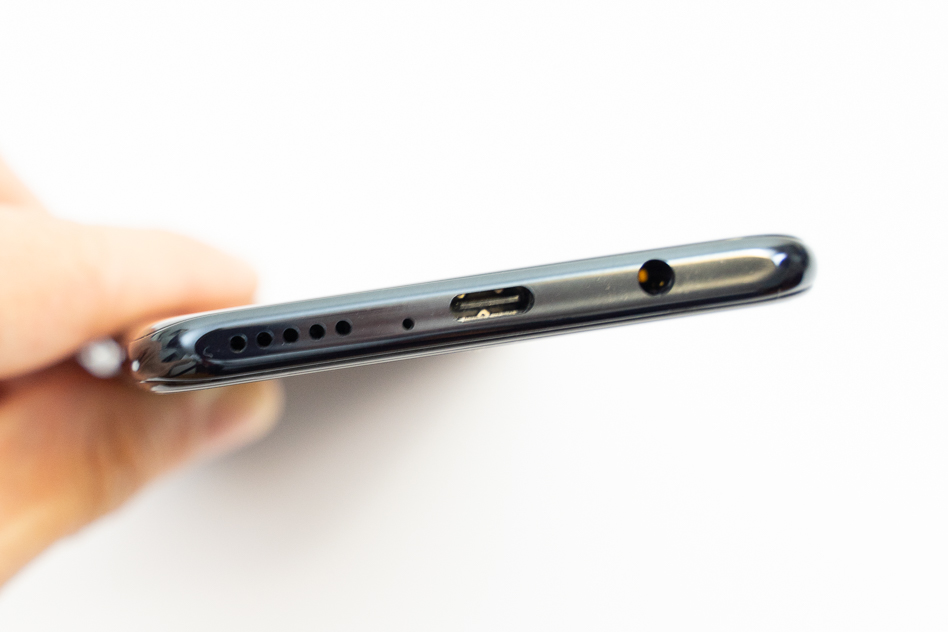 Despite its quality materials, the P30 Lite lacks an IP rating. There are no rubber stoppers around the SIM tray to prevent moisture from entering, and the speaker piece looks porous, too.

For the P30 Lite, Huawei deployed a panel technology called LTPS, which carries superior pixel density but degrades faster than IPS displays. There are no complaints here; while its various specs couldn’t meet the rigorous demands of HDR, and its contrast can’t hold a candle to OLED, its colors are still plenty serviceable for everyday viewing. 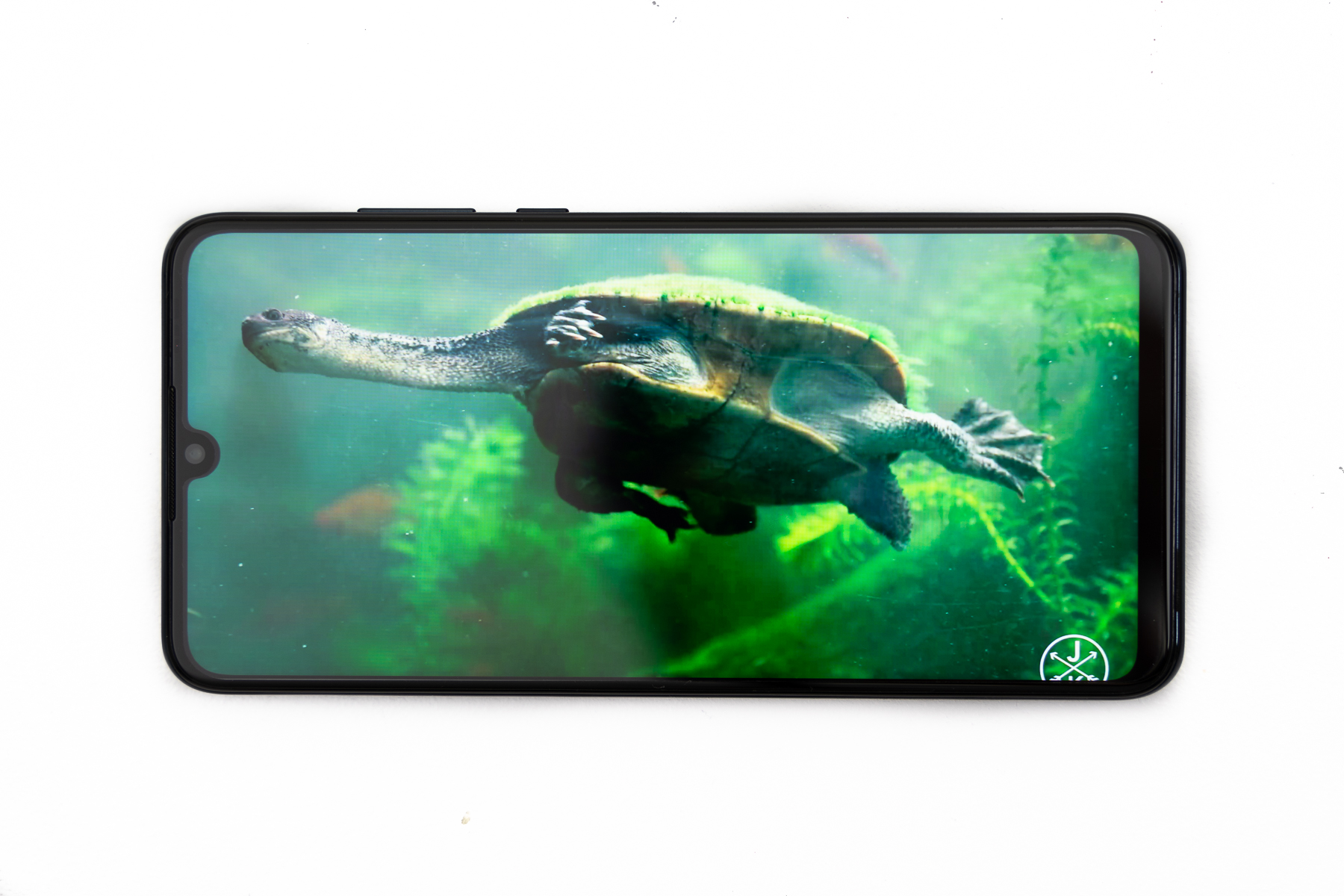 With that said, I would recommend dialing back the saturation from “Vivid” to “Natural”. In vivid mode, colors are exorbitantly oversaturated and completely blown out of whack. The software also offers color temperature adjustments for specific personal tastes.

More pixels, more power. To ease off its their power consumption, the P30 Lite can dynamically lower its resolution in tasks that don’t require absolute sharpness.

A midrange pricepoint often comes at sacrificing features — like an in-display fingerprint sensor. Instead, The P30 Lite concedes with a dedicated finger sensor planted at the rear.

The P30 Lite’s camera array consists of two and a half cameras. Yes, there are technically three cameras, but the last is used only for depth sensing and not for imaging. A 24MP f/ 1.8 camera is the primary camera. The primary camera is assisted by an 8MP wide-angle camera, and a 2MP depth sensor. A variant with a 48MP main sensor also exists, although it isn’t available in Canada.

Unfortunately, the P30 Lite misses out on Huawei’s RYYB image sensor and opts for a regular RGB sensor instead. The RYYB sensor was the key for the P30 Pro’s superb low light shooting mode. But even without it, the P30 Lite tends to be biased towards yellow. In the daytime shots of the office building, it’s clear that the P30 Lite casts a yellow tint, which dulls the colors and reduces the contrast. At times, it also under-compensates for exposure and leaves dark blotches in shadows.

Although the camera is plenty sharp on its own, the P30 Lite applies heavy-handed sharpening post trigger. With an unpredictable consistency, it can either define details in certain areas or drown them out.

The 8MP ultra-wide camera has good colors and captures plenty of detail. Be careful, however, as it can significantly warp the scene. Use with caution.

Huawei P30 series phones were frequently praised for their tremendous low-light prowess. Because of the absence of a more robust sensor, the P30 Lite’s night mode is an ostensible step down from the Huawei P30 and P30 Pro, but still has good sharpness and detail. It also has trouble focusing in dim light, perhaps due to the lack of contrast-detection autofocus. Also be warned that even with optical image stabilization, you’d still need to be very still to prevent blurry photos when shooting in Night Mode.

The HiSilicon Kirin 710 is Huawei’s midrange custom chipset and four ARM Cortex-A73 performance cores plus four ARM Cortex-A53 efficiency cores. It’s manufactured on the 12nm transistor node as opposed to the smaller, more power efficient 10nm transistor used for the Kirin 980. Graphics is handled by the Mali G51 graphics processor. The chipset is aided by 6GB of RAM and 128GB of storage.

In terms of raw calculations, the Kirin 710 is on par with the Snapdragon 670 in both single and multithreaded performance. What’s even more impressive is that it produced this result despite running EMUI, a heavier operating system compared to the Pixel’s stock Android. Off to a good start. 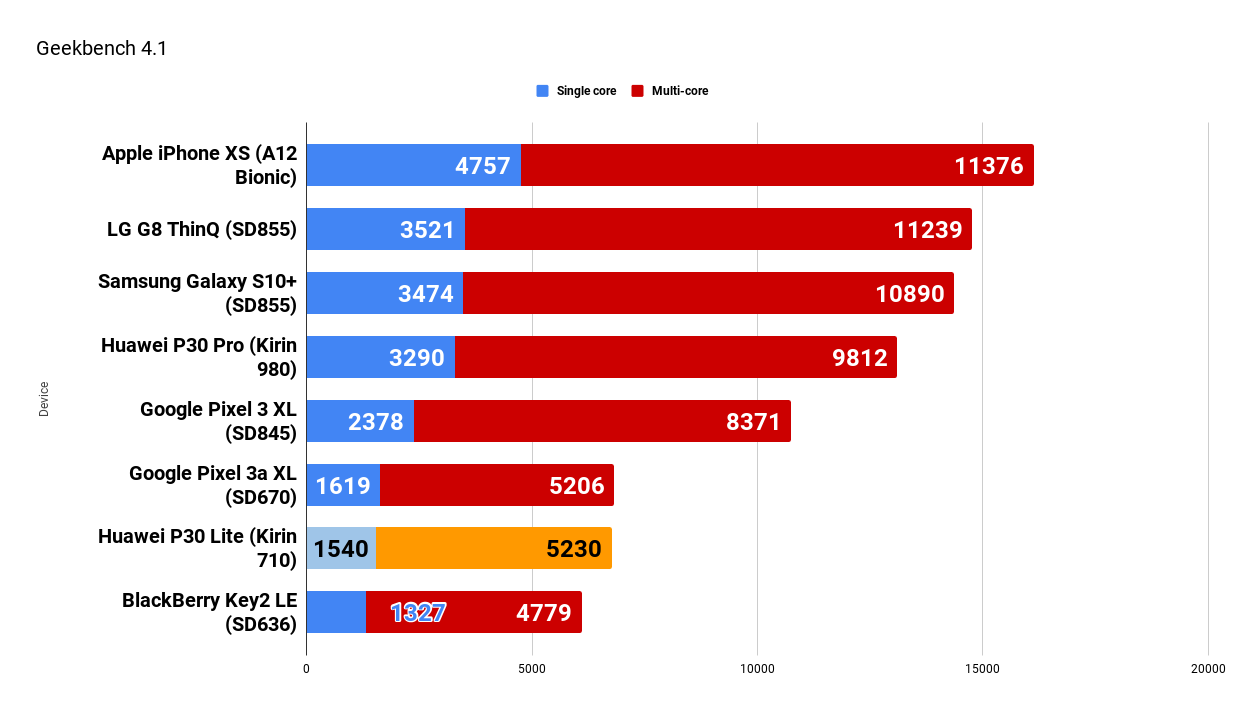 PC Mark Work evaluates the phone’s performance as a whole, and it’s in this department that P30 Lite starts to trail behind the midrange Google Pixel 3a XL by a noticeable margin. 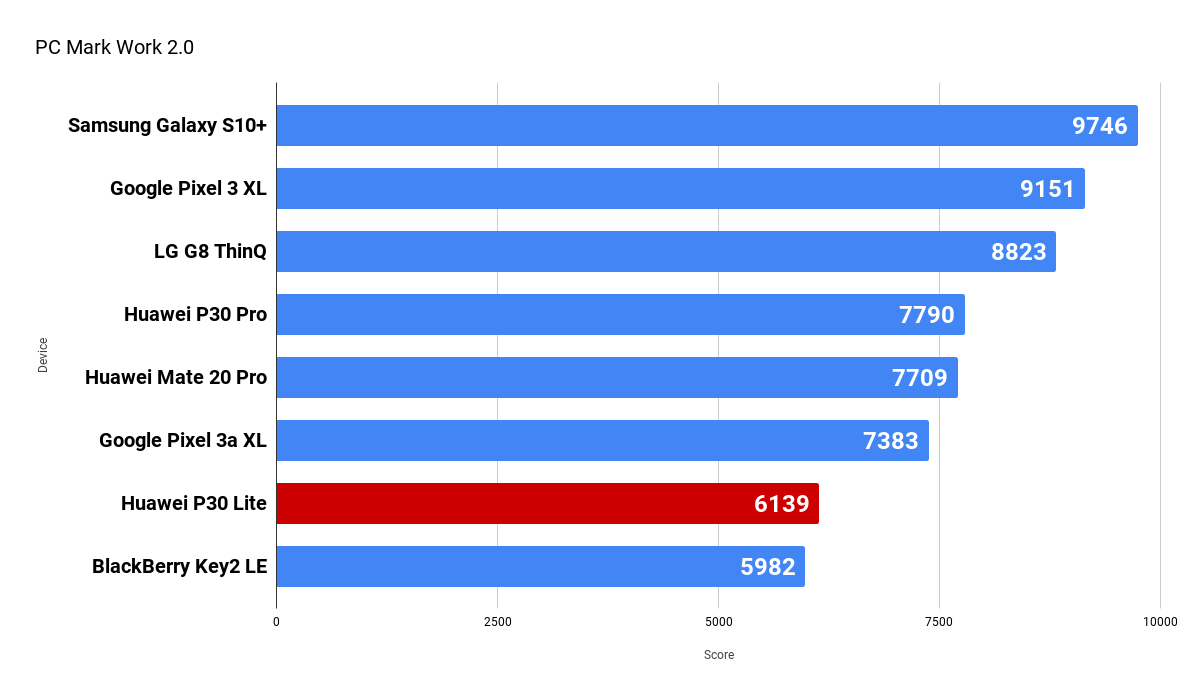 The P30 Lite performed the worst in 3D Mark, even trailing behind the BlackBerry Key2 LE and its low-end Adreno 509 GPU. That’s no surprise, however, as Mali’s graphics solutions never could edge out against their Qualcomm competitors. 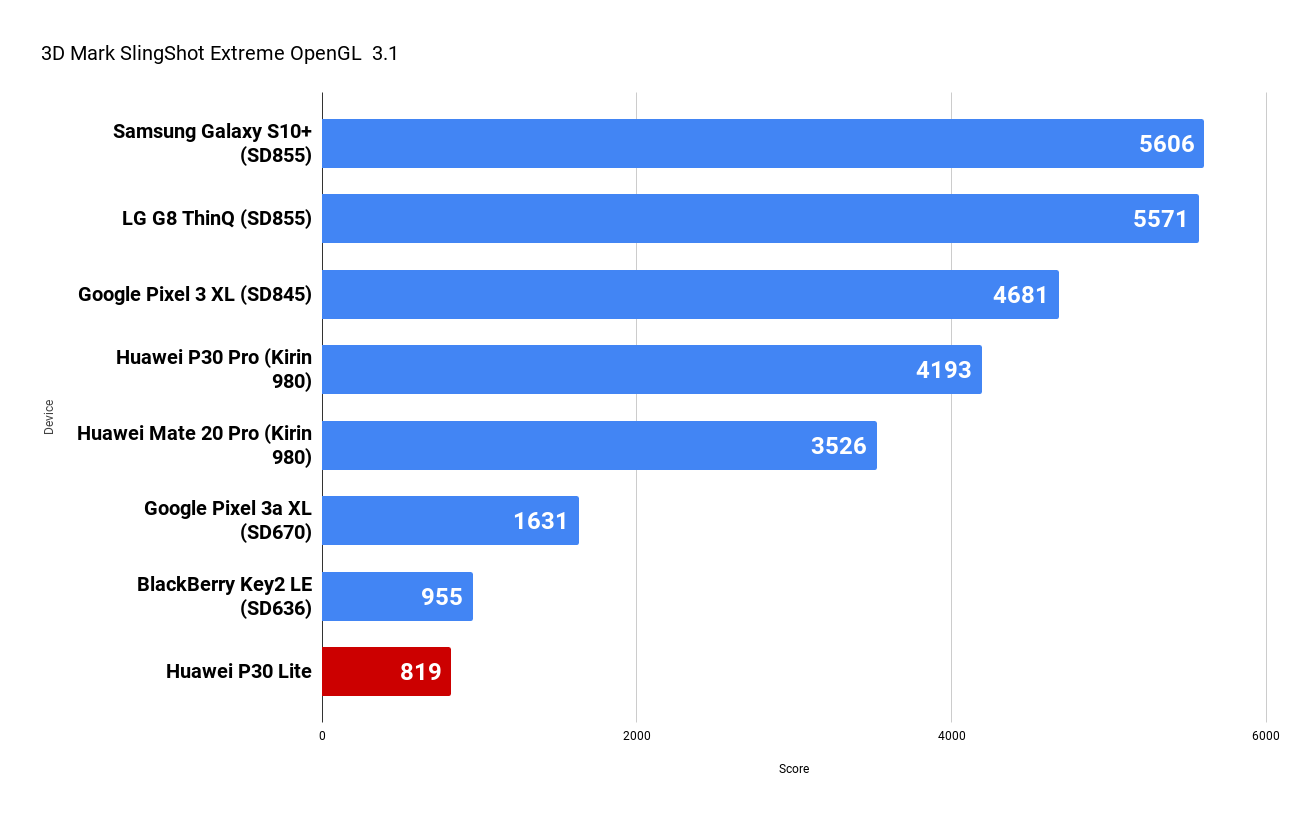 On a positive note, gaming hasn’t been one of the pain points — just don’t expect eye-watering effects. Most mobile games are designed to run on as many devices as possible and would optimize the graphics settings for lower-end chipsets. Player Unknown Battlegrounds, for example, automatically adjusted its graphics settings to medium.

Huawei universally applies its EMUI 9 Android skin across all of its phones. It touts a plethora of customization options to gesture controls, interface options, and so on. Furthermore, features like dual-apps, which allows you sign-in to a second instance of social media apps, and Private Space, which runs a virtual instance of the entire phone, are handy for people with dual SIMs and want to separate their work and private lives.

The P30 Lite is outfitted with an appreciable 3,340 mAh battery. Paired with a midrange chip, I’d expected much longer runtime than the test revealed. Dragging it through my usual routine of emails, web browsing, music streaming, light photography, and social media, the P30 Lite managed about five hours of screen-on time – enough to get through a full day, but don’t hold your breath for more.

Its charger is a fair bit slower than the P30 Pro as well. Whereas the P30 Pro supports charging at 40W, the P30 Lite makes do with just 18W. Its charging speed is on par with Qualcomm’s quick charge 4.0, which takes about an hour and 40 minutes to reach full charge. It also doesn’t support wireless charging, but I doubt anyone would miss it on a midrange device.

Most Canadian carriers feature the P30 Lite for around $500 in both Black and Peacock Green color coatings. With that said, if you can comfortably forgo the warranty and buy the international version from Amazon, it can be had for as low as $389. At this price, it stands out an absolutely superb budget phone. Though you’d wish it could chew through tasks faster at times, average day-to-day use is still a cinch.

It shouldn’t come as a surprise, then, to find its competition scarce. Its closest rival in Canada is the Nokia 8.1, which sports a Qualcomm Snapdragon 710 chipset, 4GB of RAM, and 64GB of storage for $539 outright. The Snapdragon 710 should come with more robust graphics, but also 2GB less RAM and half the storage as the P30 Lite.

What is worrying, however, is Huawei’s relationship with U.S. technology companies. After being blacklisted as a U.S. security threat, Huawei faces potential severe business restrictions with companies like Google, Intel, and ARM, who supply critical components to their phones, laptops, and network equipment. For the consumer mobile market, axing Google would be particularly devastating as it would spell the end of Android on future Huawei phones.

Political rivalries and bureaucracies aside, the P30 Lite is a solid midrange option. Most of its core functions — the camera, display, storage, and build quality — exceed expectations at this price point. With that said, its chipset struggles in demanding tasks, and a middling battery life exert anxiety on heavy users. But taking into consideration its current affordable pricing, the P30 Lite is an excellent buy for those on a budget.

Tom Li
Telecommunication and consumer hardware are Tom's main beats at IT Business. He loves to talk about Canada's network infrastructure, semiconductor products, and of course, anything hot and new in the consumer technology space. You'll also occasionally see his name appended to articles on cloud, security, and SaaS-related news. If you're ever up for a lengthy discussion about the nuances of each of the above sectors or have an upcoming product that people will love, feel free to drop him a line at tli@itwc.ca.
Previous articleDigital Transformation Awards 2019 – Artificial Intelligence Disruptor finalists
Next articleHashtag Trending – Is FaceApp safe?; Vienna driverless bus trial on hold; quantum leap in quantum computing