It’s been almost five years since HP Inc. abandoned Palm and webOS; and its last smartphone, the HP VoiceTab, was launched two years ago – in India.

But now HP is re-entering the North American smartphone market in a big way – the company officially announced the release of the Windows 10-powered HP Elite x3 today, one day before the Mobile World Congress begins in Barcelona on Feb. 22.

The release of the x3, a 5.9-inch smartphone that HP says can serve as a stand-in for users’ desktop, notebook, and tablet computers thanks to a series of docks it plans to bundle with the device, marks not only the company’s first entry into the mobile enterprise market, but the first time a third party has collaborated with Microsoft Corp. to offer a Windows 10 smartphone.

“If you take away from this conversation that this is simply HP launching a Windows phone with Continuum, then I’ve failed to explain to you the depth and breadth of our strategy and approach,” Andy Nuttall, HP’s director of mobility strategy, told reporters prior to the official release. “We truly believe that we’re pushing way beyond a phone in order to build a whole new category of computing.”

In addition to its sizeable 2560-by-1440-pixel screen, the Elite x3 boasts a Qualcomm Snapdragon 800-series processor (with users having the option of installing two dual-core 2.15 GHz Snapdragon 820s), 64 GB of storage, a microSD port that can be used to add up to 2 TB of additional storage, a 16 MP rear-facing camera, an eight MP front-facing camera, a dual-biometrics device with both eye-recognition and fingerprint-reading capabilities, and 4 GB of RAM. It’s also waterproof, and while Nuttall could not offer specific numbers regarding battery life, he boasted that the x3’s battery was 15 per cent larger than comparable devices, and designed to run for a full business day, with all of the “rigours of the workplace” that entails.

Like Microsoft’s Lumia line of Windows smartphones, the Elite x3 can also be plugged into a monitor using Continuum, a feature that HP plans to make central to its marketing, supporting the device with a series of docks that will be available at release (below), both separately and as a bundle, turning it into a viable notebook or desktop. 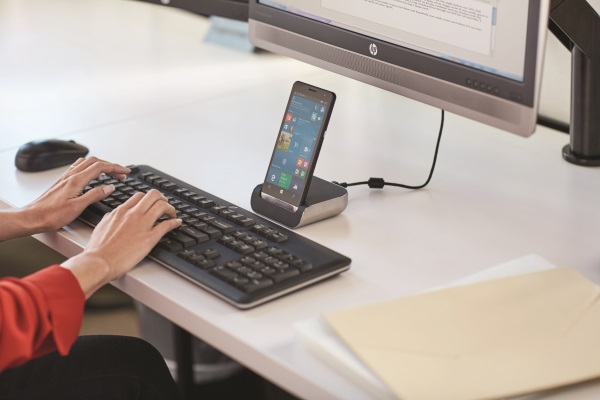 When asked how the x3 will differ from previous attempts to create a single mobile, laptop, and desktop device to little success, Nuttall said that previous devices were underpowered, and released to a market that wasn’t prepared for them five years ago.

“Anyone who’s used [previous devices] will say they were underpowered for a full-screen experience, there wasn’t an operating system that really made sense to drive the kinds of conversion experiences we’re talking about, and at that point the mobile device, whether on the phone or the tablet, wasn’t really so central to everyone’s lives as it is now,” he said. “With proper PC power, Windows 10 OS, with Continuum… and also the kind of ‘data is everywhere, consumers are so focused on their mobile device,’ makes this real kind of paradigm shift work.”

The x3’s development was inspired by feedback from HP’s enterprise customers, whom Nuttall said demanded the larger screen and frequently complained about the need to switch between two or three computing devices for work. More than half of the customers who have tested the device said they could see it replacing a tablet, while more than a third said it could replace their notebook, he said. Though aimed at the enterprise market, the x3 will also be available for consumers at HP.com.

HP declined to reveal the cost of the x3 or its accessories, nor has it given a firm release date, though Nuttall said the company expects to ship the device in August, will announce the device’s initial markets before then, and that buying the bundle, including notebook and desktop docks, would be a cheaper proposition than purchasing a desktop, notebook, and phone.

Eric Emin Wood
Former editor of ITBusiness.ca turned consultant with public relations firm Porter Novelli. When not writing for the tech industry enjoys photography, movies, travelling, the Oxford comma, and will talk your ear off about animation if you give him an opening.
Previous articleSalesforce to support Twitter’s customer service tools – here’s what it looks like
Next articleSamsung teams with Facebook to officially announce Galaxy S7