Although many companies have been shedding jobs, some employers and recruiters have turned to Twitter to post positions and find new talent.

But using Twitter to find new work isn’t a straightforward process. Because people publish so frequently, it’s easy to miss a lead in the process. Also, Twitter’s search tool, while serviceable, sometimes makes it hard to narrow your job inquiries down to something specific.

We spoke with some career experts about how you can search wisely. In general, you must sieve through hashtags, a symbol (#) Twitter users assign to their tweets that sorts them into different categories. We also learned about a few Twitter handles (Twitter user names) that post some helpful content if you’re trying to land your next gig.

Twitter hashtags are indexed at hashtags.org, a gigantic and sometimes (ironically) overwhelming list of categories that users have created to help others sort through the noise on Twitter.

On Twitter, you can search for these hashtags by putting the symbol “#” in front of the phrase (for example: #jobs) when you type it into Twitter’s search engine. 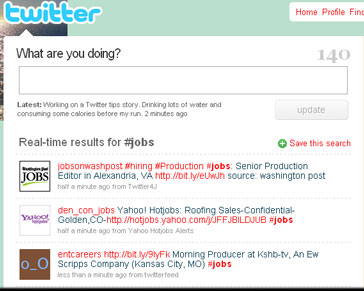 The search engine will return tweets that have been assigned the #jobs hashtag in real-time. The weakness to searching a hashtag alone: You will be forced to sieve through hundreds or thousands of jobs that might not interest you.

Consequently, it might be tempting to visit Twitter’s advanced search engine and type in the hashtag (#jobs) along with a keyword related to your expertise (say, “project manager”).

But you should be careful about narrowing your search too much, says Rosenberg. The more specific you get with Twitter search, the less it returns. Because recruiters and employers must deal with the 140 character limit, they may omit a keyword in their tweet. In other words, if you search too specifically, you could miss some good posts, he says.

“It’s really one of the challenges of Twitter,” Rosenberg says. “Lets say the recruiter is posting a job for a ‘network administrator,’ but they typed in “network admin.’ In that case, you might miss it.”

Nobody agrees on the best hashtag for jobs, which is why so many exist. The Job Lounge blog has put together a helpful list of Twitter job-related hashtags. Other people have added to the post by commenting with more suggested hashtags .

In addition to hashtags, many career management organizations, experts and non-profits also keep Twitter pages that tweet new job postings. One such organization is Job Angels (@jobangels), a non-profit that asks people around the Web to “help one person find a job.” 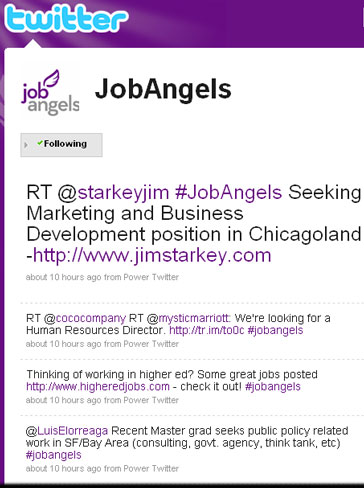 The organization will retweet messages sent by people looking for work, and the messages of employers and recruiters who have open positions. It also shares articles and best practices for getting hired, says Mark Cummuta (@TriumphCIO).

Cummuta, who has written career columns for CIO.com, volunteers as CIO for Job Angels while he looks for a paid position as a CIO or IT director.

“We’re focused on helping the job seeker,” he says. “We want to help connect them with openings, but also provide them with information that is going to help in their search.”

Other handles that list jobs include @hashjobs, @craigslistjobs, and @thejobsguy, to name just a few. If you search Twitter under the #jobs hashtag, you’ll find that the Twitter handles are sometimes geographical or occupational in nature, such as @losangelesEdjob and @JobChicago.

Other handles that job seekers may want to follow don’t necessarily just mention job postings. @WSJCareers posts articles and news about the job market that could help you in your search.

Some career experts, such as @danschawbel, @CareerRocketeer , @crisjobcoach and @kirstendixson. And don’t forget about CIO.com’s career guru, Meridith Levinson (@meridith). (We don’t profess to know them all, so please feel free to leave more suggestions in this article’s comment section.)

While it’s fine to follow job postings on Twitter, the most powerful aspect of the medium could be connecting with people who work for prospective employers, says Jason Alba, CEO of JibberJobber.com (@jasonalba). He suggests using the medium to find people who are employed at companies or organizations that you might want to work for in the future. Ideally, when a job arises, they might think of you.

“Think about three target companies, type them into Twitter’s search tool, and you’ll find people who are either talking about those companies or who actually might work for them,” Alba says.