Most people look at Twitter as a social network where they spend leisure time. It’s a place where they connect and get the latest updates from their friends. But Twitter also provides constant news updates and tends to be a place where people get their news in real time.

It’s no surprise, then, that Twitter has become a go-to resource for stock traders looking for the latest information on companies. But some bad apples have taken to manipulating Twitter to influence the market in their favour.

The most recent case is that of James Alan Craig, 62, of Dunragit, Scotland. He was charged with one count of securities fraud. In January, 2013 Craig created Twitter accounts which falsely represented 2 short selling firms. He copied their logo onto these fake accounts and made them look legitimate.

He then falsely tweeted from these accounts that 2 bio-pharmaceutical companies were under federal investigation which drove the company share prices down significantly. He then used his girlfriend’s brokerage account to buy the shares of these companies at those low prices with the hope of selling them at a profit when the prices were back to normal again.

However, this is not the first time someone has taken advantage of Twitter. An unnamed Wall Street trader made 2.5 million dollars in just a few minutes from a stock tip he received from a tweet sent by Wall Street Journal reporter Dana Mattioli. Here is how quickly this trader was able to work on this to make such a profit. 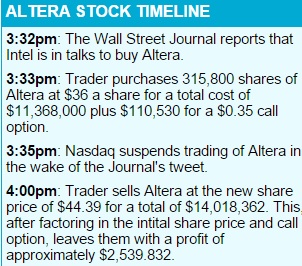 Not even Twitter’s stocks are safe from tweets that erupt on its own network. A Twitter account which stock traders closely follow called @OpenOutcrier tweeted out a link to a hoax article. It stated that Twitter had received a takeover offer. In the following minutes, Twitter’s stock prices leaped up by around 8%. Clearly someone benefited from this news article.

Markit, a financial data services provider carried out a study which concluded that from December 2011 to November 2013, companies with positive social media sentiment had their stock prices rise by 76% compared to -14% from negative sentiment stocks. Paying attention to social media can pay well on Wall Street.

These sorts of scams are surprisingly commonplace largely because Twitter bombards traders with a huge volume of information. As with anything online, however, it’s important to verify that you’re getting the right information to act on.

What about you? How do you ensure what you’re reading on Twitter is factual? And how do you identify a hoax?

Wolston Lobo
Wolston is a social media and SEO enthusiast. He has previously worked with brands like Gillette and Channel V. He is passionate about gadgets and loves the internet served with a hot cup of coffee.
Previous articleOpenText helps businesses discover and manage information to make better decisions
Next articleWindows 10 Cortana comes to Canada

Soon Facebook will allow video as your profile pic