Who doesn’t want to be number one on Google’s search results? From a business standpoint top rankings result in more traffic, interaction, more leads and sales, which ultimately leads to more revenue. Search engine marketers work day in and out trying different strategies to make it to the first place of big G’s search lists. But the race to the top is not an easy one, especially with changing algorithms and new penalties for optimization.

It’s not news that social signals, especially the ones from Google Plus tend to have a good effect on search rankings. So we planned an experiment where we would take an article which is a month or so old. (This is to ensure that the rank change is not due to the freshness of the article). We noted how high the article ranked on Google before carrying out the experiment. We would then promote it on Google Plus with the intention of gaining +1’s and shares. After a week or two we would then check if the efforts had any effect on the rankings. Here is what we did.

For the purpose of this experiment we chose Nestor Arellano’s article, 6 excellent open source network monitoring tools. This article ranked number 10 on the first page of Google when we checked it on Feb. 3 for the keywords “Open source network monitoring tools.” So I went ahead and promoted it on a relevant Google Plus community on Feb. 5. That post gave us seven +1’s and six re-shares. 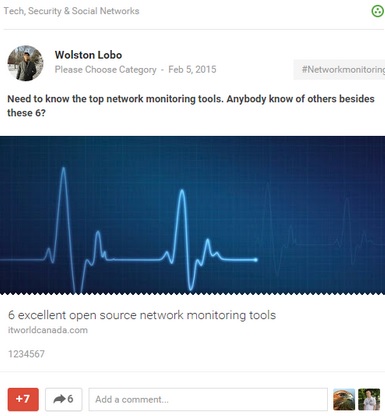 Though this is better than getting no engagement at all, I wasn’t really satisfied with the results. So I went ahead and posted the same article on the same community with a different headline , five days later. The only other difference was that the first post was made on a Thursday while the second post was made on a Tuesday. Here is the engagement that the second post received. 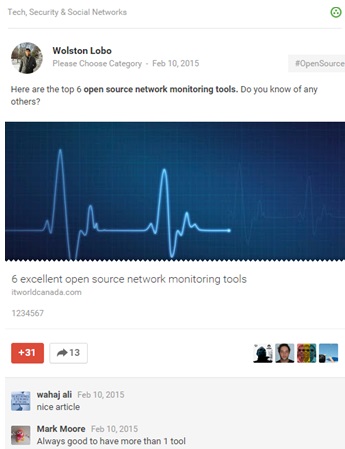 So from an engagement perspective the post received more activity on a Tuesday as compared to a Thursday with a change in content.  What we are really interested in seeing though is how this affected the search rankings for the article.

Before the Google Plus promotions, the post ranked number 10 on the first page of Google for the term “Open source network monitoring tools.” One week after Google Plus promotions:  It increased one spot from 10th to ninth overall. Ten days later, it climbed up another four spots to rank at number five.

Today, it stands at number three. (Go ahead and check it on Google).

Learnings and points to remember

1. Don’t overdo it or spam Google Plus communities continuously, since this could backfire. Community moderators may ban you for spamming.
2. Google Plus provides good amount of social engagement if posted at the right time, on a relevant community.
3. Google Plus still has good amount of SEO value.
4. It is better to post on a large engaged Google Plus community rather than create a post on your business page (especially if you have few followers).
5. Timing of the post is important and so is the content of the post. Experiment by posting on different days with different content and check the results accordingly.

Wolston Lobo
Wolston is a social media and SEO enthusiast. He has previously worked with brands like Gillette and Channel V. He is passionate about gadgets and loves the internet served with a hot cup of coffee.
Previous article3 things to watch for at Mobile World Congress 2015
Next articleFacebook starts rolling out Ads Manager app for iOS