Six months ago, Blue Man Group had successfully performed before 17 million people around the world over two decades – but still couldn’t find a way for its own 500 staff to share ideas effectively.

That’s where social intranet came in.

The group, founded in New York in 1987 and touring the globe almost non-stop since then, called on Socialtext Inc. of Palo Alto, Calif. to deploy a social intranet for its company-wide communications.

First, Blue Man Group had to assess its company’s existing traditional intranet, the Web site model where staff simply type in ideas or comments that can only be accessed internally by all employees. And that took all of about a few seconds to size up.

“It was kind of a joke and nobody used it,” says Michael Idinopulos, vice-president of Socialtext.

“People were not even using it, so much so that we turned it off and didn’t even hear any complaints,” says David Wharton, director of infrastructure at Blue Man Productions LLC, the group’s New York head office. “It was a static thing that wasn’t being updated and nobody was really passionate about it.”

For an organization with so many creative thinkers and performers, the text style intranet model just wasn’t cutting it with Blue Man Group. So Socialtext, whose Canadian clients include Ontario Teachers Pension Fund, Toronto’s Hospital For Sick Children and the Canadian Food Inspection Agency, built the company a software-based social intranet that’s been up and running for three months. 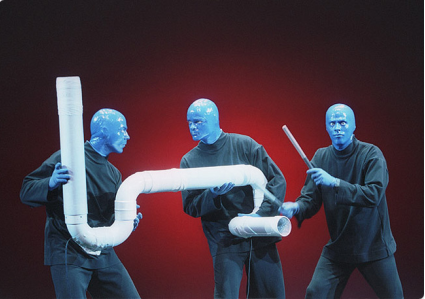 Members from the Blue Man Group.

Like the intranet site itself, the process of building it was collaborative. Blue Man Group asked all 500 staff to contribute ideas about what they needed the new intranet to be and how they would use it. The company also held a contest soliciting names for the site from its workers, with the winner being Shiznet, a play on the Snoop Dogg rap song Tha Shiznit, an expression which basically translates to “awesome” or “the bomb.”

Now Blue Man Group – whose performers never utter a word on or off stage to stay in character at all times – finds its 500 workers actively chatting, sharing, and posting content that includes comments, blogs, links, photos and video.

“They have made it a one-stop shop for everything that matters in their organization, from creative stuff to more operational processes — like getting comp tickets for family and friends — to travel and an events calendar,” Idinopulos says.

Employees can view their pay stubs, make time off requests and find contact details for coworkers located half way across the world. But so far the most important content they’re sharing is ideas, Idinopulos says.

“Their creative process was really driven before from the primary (Blue Man Group) location in New York. So this has really opened up the process for their performers and other (staff) elsewhere to contribute to that,” he says. “So they’re looking at conversations and there’s brainstorming happening that can translate into what’s happening on stage.”

“Before,” adds Wharton, “it was a very siloed environment and something the wide area network and the intranet have been able to provide is better connectivity and better networks to collaborate, share documents, share thoughts, share ideas. Now we’re kind of more of a centralized community and we’re not just working in Boston and just working in Las Vegas. We’re all part of one Blue Man Group collective and that’s something that’s really important for us.”

Site is a “living, breathing thing.”

The intranet site is divided up into sections for each international location where the show is playing, including Boston, Tokyo, Las Vegas and even an oceanfaring version on Norwegian Cruise Lines. The company’s audio and video files, such as TV ads, used to be stored on file servers and external hard drives so they could be accessed by staff. Now, “we have a place where we can basically embed all of our media assets internally” and easily share them staff-wide, Wharton says.

The Shiznet’s main page is locked to maintain a consistent look and site map but most other pages can be edited or customized by Blue Man employees as needed.

“You can broadcast (content internally) either specifically to a show or to the whole organization or just to a work group,” Wharton says. “It’s a living and breathing thing. It’s scalable. Everything is divided up into different widgets. You can customize this. You can drag and drop certain things.”

Social intranet is still a bit of an emerging trend, so little data has been gathered to date on how widely it’s being used and whether it has any measurable impact on businesses and organizations deploying it. Yet a Canadian company in the sector asserts that social intranet is a way to use the content sharing capabilities of social networking as an enterprise tool for businesses to engage employees not only in each other’s opinions and activities, but also in their jobs.

“You’re seeing the realization that these kind of Web 2.0 design patterns made popular in consumer sites like Facebook and LinkedIn are trickling into other enterprise software platforms,” says Gordon Ross, vice-president and partner at OpenRoad Communications Ltd. In Vancouver which has deployed its ThoughtFarmer social intranet solution for clients such as eHarmony.com, Mountain Equipment Co-op and the U.K.’s Guardian News Group. 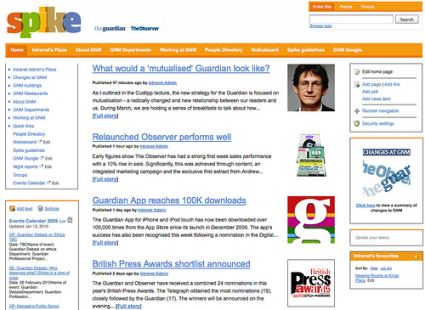 “The old intranet was (sending out content from) a few to many. This new intranet is a ‘many to many’ intranet,” Ross says. “What if we turned that (old) intranet into a place where all employees can author content and connect easily, where everyone can be an author and contribute? They can update their user profile, write a blog post, comment on someone’s page and edit a page.”

The ability to contribute and share content so quickly in so many formats with so many colleagues helps many employees feel more engaged with their jobs, coworkers and employers, according to a presentation at this year’s Social Intranet Summit held in Vancouver by OpenRoad in September.

Presenter Andy Jankowski, director of Intranet Benchmarking Forum research group, cited Gallup Organization data that disengaged employees cost U.S. companies $370 billion in lost productivity each year. He also pointed to a Towers Watson study showing that companies with highly engaged workers improved their operating income by 19.2 per cent in a 12 month span while firms with disengaged staff saw their operation income drop by 32.7 per cent in the same period.

“Giving your employees a voice and making them feel they matter, that’s a soft measure,” Ross says of the need for more quantifiable data on social intranets. “It’s having a huge effect on the workforce, on the ability for organizations to thrive in really complex and difficult times.”

ChristineWong is a Staff Writer at ITBusiness.ca. Followher on Twitter,and join in theconversation on the ITBusiness Facebook Page.

Christine Wonghttp://www.itbusiness.ca
Christine Wong has been an on-air reporter for a national daily show on Rogers TV and at High Tech TV, a weekly news magazine on CTV's Ottawa affiliate. She was also an associate producer at Report On Business Television (now called BNN) and CBC's The Hour With George Stroumboulopoulos. As an associate producer at Slice TV, she helped launch two national daily talk shows, The Mom Show and Three Takes. Recently, she was a Staff Writer at ITBusiness.ca and is now a freelance contributor.
Previous articleStartup brings juicy gossip to Facebook
Next articleWith