About 10 years ago, Henry’s set up a virtual store on eBay.

Ever since then, the Canadian photography and video equipment chain has been reaping the benefits of that decision.

The company’s online auction adventure has turned out to be a windfall in more ways than one.

For instance, the strategy enabled Henry’s to develop a channel to market items — such as loose camera parts, broken cameras, end-of-the-line products and collectibles.

All these items typically gather dust in a bricks and mortar setting. Rather than sell the items at extremely marked down prices, Henry’s featured them on the auction store and allowed eBayers to bid for products.

The move also introduced the 100-year-old Canadian store to thousands of U.S. customers, who would otherwise have probably never heard of Henry’s.

“It was like killing two birds with one stone,” said Max Payne, director of marketing at Henry’s.

Huge online traffic generated by eBay caught the eye of Henry’s decision makers back in 2000, said Payne. “We taught it would be a great channel for our hard-to-sell items and potentially an additional revenue stream.” 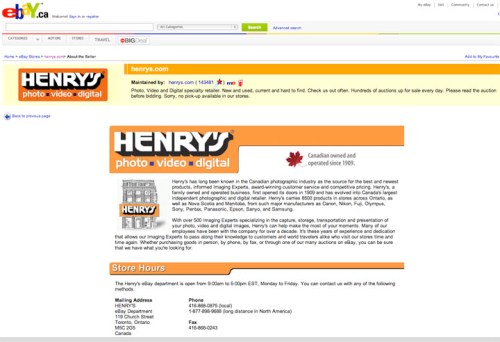 Payne wouldn’t specify how much its auction store on eBay brings, or what percentage of the company’s total revenues it accounts for.

“It’s “substantial enough for us to keep the store open for 10 years,” he said.

Henry’s experience is typical of many small and mid-sized retailers that have found success on eBay, according to Andrea Stairs, country manager for retail at eBay Canada.

“The sheer scale of traffic the eBay site pulls in is a big draw for many businesses,” she said.

Stairs said eBay was initially envisioned as sort of a “collectors’ haven” where people with varied interests could search for and trade items.

Before eBay, she said, there was very little chance an arm chair collector of some obscure memorabilia could ever discover a rare item stored in the attic of another collector living in a nearby state.

“Today that collector can use eBay to browse through thousands of items from around the world.”

Today there are more than six million people trading on eBay engaging in transactions that run up to more than $7 billion, Stairs said.

The online venue has attracted both startup retailers and large corporations.

“Large companies set up an eBay presence because it’s good for exposure,” she said.

Before Henry’s developed a strong eBay clientele, the company did experience some growth pains, according to Payne.

For example, it failed to anticipate the resource drain that would result from running an extra online store.

Henry’s began by posting 50 to 100 items on eBay. However, the task of cataloguing, taking pictures and writing descriptions for these items soon became a burden.

For example, many products required photos to be shot from several angles to help buyers better assess the item. Blurbs describing the condition of the item and its salient features had to be written. Items had to be stored and monitored until they reached the buyer. 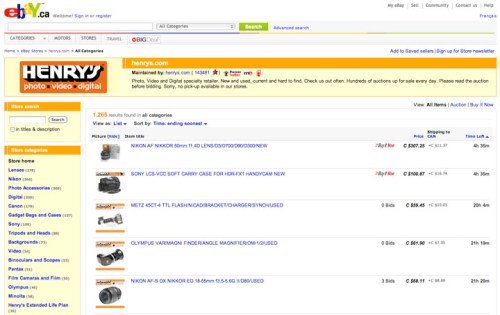 “It was a challenge when you dealt with hundreds of items. It easily became a nightmare when we scaled up and began selling thousands,” Payne said.

Henry’s soon ran the auction store much like another bricks-and-mortar location. It gained a staff of five people who handled customer service, inventory and shipping.

Here are key lessons that Henry’s learned as it grew its eBay store:

1. Get a definite idea of what you’re getting into. Investigate the market. Study how other retailers executed their campaign. Determine how operating an eBay store will affect existing operations and resources.

2. Allocate adequate resources and staff for the project. Add staff if the volume demands it, and cut back when traffic is slow.

3. As much as possible take advantage of existing backend facilities and IT resources. For instance, Henry’s eBay store “piggybacked” on its warehouse as well as CRM, and payment engines. “Resist the temptation to reinvent the wheel,” said Payne.

4. Focus on long term growth rather than short term profit. It took Henry’s eBay store more than 18 months to become self sustaining. “Sometimes it could be a long haul, you have to keep your eyes on the prize,” said Payne.