I’ve had my hands on Acer’s TravelMate P276 Series desktop replacement notebook for about six months now, and I can report that it had successfully replaced my old desktop tower PC.

This notebook has all the power I could ever need with a 4th generation Intel Core i7-4510U processor, Nvidia GeForce 840M graphics with 2GB dedicated DDR3 VRAM, 1TB in storage and 16GB DDR3L SDRAM. I occasionally do some light video editing and I had no memory troubles whatsoever and, compared to my Ultrabook, it was nice to not have to worry about storage.

The 17.3” LED-backlit display with HD+ 1600×900 resolution fit nicely on my desktop and didn’t look out of place next to my 19” second display. The ComfyView anti-glare technology also adjusts to the carrying light levels in my home office.

I’m very finicky when it comes to laptop keyboards, and while I found this one average I quickly decided to use a wireless keyboard and mouse with the P276 as it just works better in my home office setup with the second display. I like that it has the numeric interface though, and I tried not to have to test the spill-resistance feature. The trackpad also supports two-finger scroll and pinch and swipes across charms and application commands.

I did a few video conferences without complaint with the HD 720p integrated webcam, which can also be utilized for an Acer-backed face recognition feature as an alternative to logging into Windows with a password. Cool feature when it works, but it gave me trouble. It worked well for a few weeks until I changed offices. After that, even after shooting new reference pictures in the new environment if just refused to recognize me as me reliably. I went back to just typing in my password. 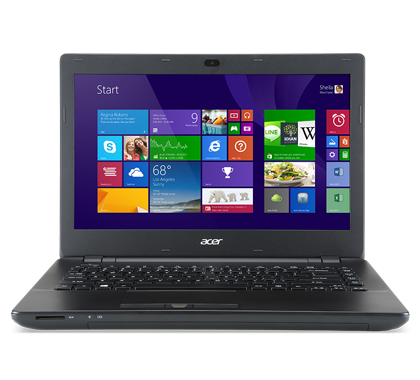 There are plenty of ports with the P276, as befits a machine of this size. The USB 3.0 port is handy for charging my phone without firing up the machine, and there’s also two USB 2.0 ports and HDMI-out for connecting my second display.

This is a commercial model so you get the usual enterprise security features such as Acer’s ProShield Manager Suite and the Acer Office manager manageability solution which allows IT administrators to deploy security policies, monitor assets, and schedule maintenance costs.

Acer promises up to 6.5 hours of battery life with the four-cell battery, but I kept mine on the desktop so I can’t testify to that figure. Weighing in at three kilos this isn’t a machine designed for lots of portability.

The Acer TravelMate P276 is available in Canada now starting at $1049. If you’re looking for a desktop replacement with enough power to do a little more than your average web processing, it’s a good bet.

Jeff Jedras
Jeff Jedras is a technology journalist with IT World Canada and a member of the IT Business team. He began his career in technology journalism in the late 1990s, covering the Ottawa technology sector for Silicon Valley North and the Ottawa Business Journal. He later covered the technology scene in Vancouver before joining IT World Canada in Toronto in 2005, covering enterprise IT for ComputerWorld Canada and the channel for Computer Dealer News. His writing has also appeared in the Vancouver Sun & the Ottawa Citizen.
Previous article
New Accenture Analytics Platform is a data scientist in a box
Next article
The Force (Touch) is strong with Apple’s new MacBook Pro