Google was quick to launch a version of its People Finder service to help people find each other in the wake of the devastating 8.8 magnitude earthquake that hit Japan Friday.

The service, set up to work in both English and Japanese, is designed to let people inquire about others, as well as post information – where they are, their condition — about themselves or someone else. 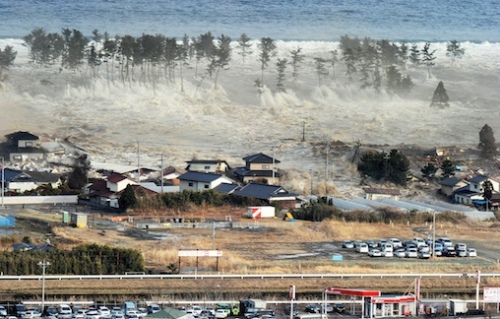 A massive tsunami sweeps in to engulf a residential area after a powerful earthquake struck off the coast of Japan. (Image: Reuters)

A major earthquake shook a large part of Japan on Friday afternoon sparking a large tsunami that swept away houses, buildings and cars along Japan’s eastern coast.

Pointers on how to prepare your business to weather any kind of disaster:

Half of SMBs not prepared for disaster

How to get employees passionate about disaster recovery

The earthquake hit at 2:46pm (5:46am GMT) and measured magnitude 8.8 according to the U.S. Geological Survey. It was centered 10 kilometers below the Pacific Ocean off Miyagi prefecture.

The Pacific Tsunami Warning Center issued a tsunami warning that extended across a large part of the Pacific, including Russia, Taiwan, Indonesia and Guam.

Buildings in the Japanese capital shook violently and items were knocked off shelves. Railway and subway lines stopped, expressways were closed and a nuclear power station automatically stopped. Several fires were sparked in Tokyo.

Power outages were reported across a wide part of Japan and telephone service, both wired and wireless, was disrupted with many calls going unconnected.

The quake measured 7 on the Japanese scale of 1 to 7 in Miyagi prefecture.

The quake, which was the strongest felt for years in Tokyo, was followed by several aftershocks.

On the financial markets, the yen dropped sharply soon after the quake.

While Google notes on the site that it cannot verify the accuracy of any of the information put into the Person Finder app, all of the data is available to the public.

How social media is able to help in times of disaster:

Google also posted a tsunami warning on what is its generally sparse search home page. Just below the search bar, Google has written, “Tsunami Alert for New Zealand, the Philippines, Indonesia, Papua New Guinea, Hawaii, and others. Waves expected over the next few hours, caused by 8.9 earthquake in Japan.”

As for its Person Finder, this isn’t the first time that Google has quickly launched a new version of it in the wake of a tragedy .

Sharon Gaudin covers the Internet and Web 2.0, emerging technologies, and desktop and laptop chips for Computerworld. Follow Sharon on Twitter at @sgaudinor subscribe to Sharon’s RSS feed. Her e-mail address is sgaudin@computerworld.com .

Top 5 security threats to watch out for this year