In addition to Analytics Premium, which will officially be renamed Analytics 360, and Adometry, which will be renamed Google Attribution 360, the new service will incorporate four brand-new tools: Tag Manager 360, a simplified way to gather site information; Data Studio 360, a data visualization tool; Optimize 360, which allows marketers to personalize websites according to user interests; and Audience Center 360, a data management platform.

“A lot of changes have occurred in the marketing ecosystem over the last five to seven years, primarily driven by mobile, but also by new channels such as social,” Casey Carey, Google Analytics’ director of marketing, told ITBusiness.ca. “So we spent a lot of time thinking about how the world’s changed, and what it is that marketers need to be able to do to actually be successful in this new world.” 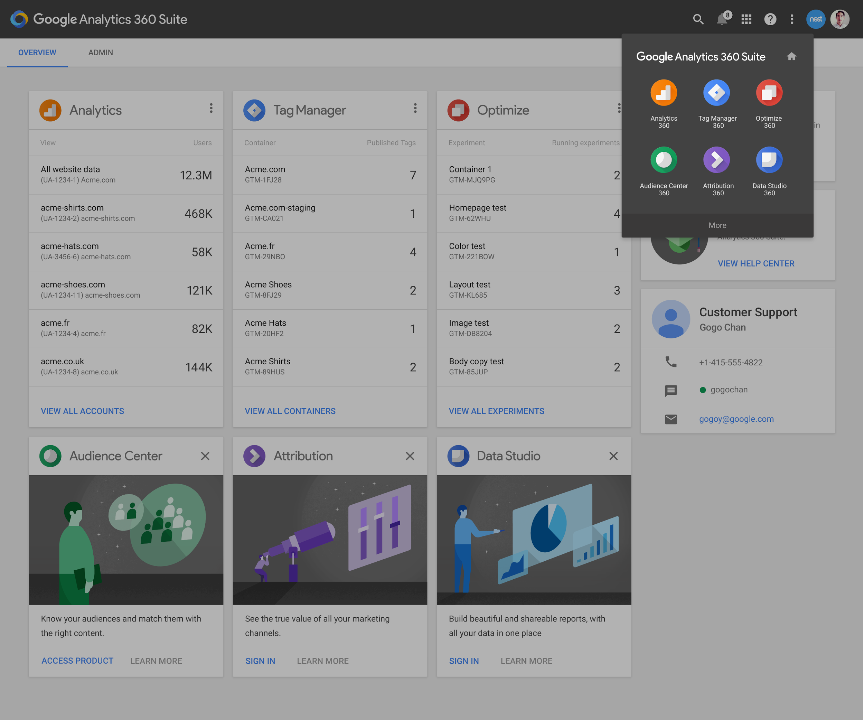 The company’s goal was nothing less than to simplify the marketing process the same way it simplified browsing the Internet, Carey said, with the engineers who developed the six parts of Analytics 360 ultimately keeping four elements in mind:

Consequently, one of the cornerstones of Analytics 360 will be deeper and more useful insights, Carey said, including the sort of built-in intelligence that will let users know if, say, conversion rates are down five per cent from one period to another, or if a particular product improved especially well, and why.

“We’ll be giving them things that today I think are somewhat unavailable to a lot of users, so I’m very excited about that,” Carey said.

Another pillar is the linked platforms that allow users to easily transfer data between the six programs: As part of its research, Google commissioned Forrester Research to conduct a survey, and discovered that 84 per cent of marketers didn’t believe their data sources were integrated well enough.

“As a marketer myself, that sounds absolutely right,” Carey said. “We need to do a much better job.”

Like the company’s signature search engine software, which now fields billions of daily search queries and generates answers before users finish typing, Analytics 360 aims to give marketers the power to deliver a useful experience specially tailored for each customer; like Google Docs, it will allow marketers to collaborate more easily; and by taking advantage of Google’s vast treasury of what it calls “micromoments” – those pockets of time in which users take advantage of a brief opportunity to check something and, potentially, become customers in the process – Analytics 360 will allow marketers to follow every stage of the consumer process, Carey said.

“That collaboration will create better business decisions down the road, because more people are looking at and leveraging it,” he said.

“Google wants to monetize its insights in programmatic and campaign,” Wang said. “This offering is about measuring engagement and campaign effectiveness.”

Asked how Analytics 360 will stack against the competition, Carey declined to comment on any competitors directly, though he certainly believes Google brings something new to the table.

“Our products are known for being easy to use and accessible by a much broader audience, so I think we bring that to bear in anything we do,” he said. “The amazing infrastructure, the data science and machine-learning intelligence applied to the hard problems, and at the end of the day, just the whole collaborative nature of work… it’s what makes Google Google.”

Google Analytics 360 is currently available in limited beta to both Canadian and American users. Pricing for the new suite isn’t available yet. Carey says the final version will be available by the third quarter of 2016.

Eric Emin Wood
Former editor of ITBusiness.ca turned consultant with public relations firm Porter Novelli. When not writing for the tech industry enjoys photography, movies, travelling, the Oxford comma, and will talk your ear off about animation if you give him an opening.
Previous articleSalesforce streamlines wealth advisory process with Financial Services Cloud
Next articleSecure messaging scorecard shows which messaging apps are most trustworthy