Retailers that advertise their physical storefronts with Google ads will now be able to show consumers exactly how many items they have available to buy at the nearest location, the search giant announced this week.

While the new ad feature is already available in the U.S., U.K., Germany, France, Japan, and Australia, it will also soon be available in Canada, according to Google. Stores that are using Google My Business will be eligible to make use of the inventory display after filling out an online form.

According to Google, Kohl’s participated in a pilot program for the new “in-stock” ad types and saw a 40-50 per cent increase in clicks from their Google local storefront to its website. Here’s what the ad would look like to a consumer using a smartphone:

Why use this type of ad? Google’s data shows that Canadian smartphone owners are forming a new habit that plays just before they go out to buy something. They use Google to search for a type of store or product “near me” to see local listings. Thanks to a combination of GPS data and Google’s WiFi hotspot location technology, this results in useful information being returned. Take a look at the rise of this type of search in Canada:

“Near me” Interest over time

Regionally, Ontario residents use “near me” searches most often, followed by B.C., Alberta, and Manitoba.

The most common type of “near me” search though, is for food, not retail goods or merchandise. Canadians in particular like to search for “restaurants near me” and “food near me” or even very specifically “pizza near me.”

Businesses taking advantage of the new ad feature will see local inventory numbers displayed in two different places. First of all in the ad and the Google storefront page, and also in the “knowledge panel” that Google users see when they search a specific business name. 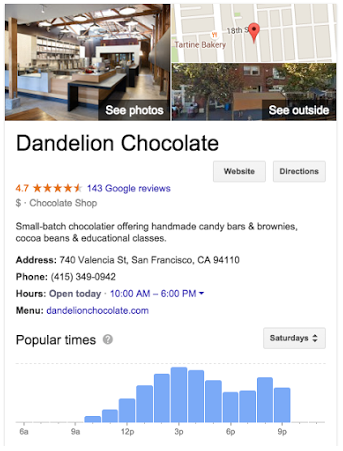 Brian Jacksonhttp://www.itbusiness.ca
Editorial director of IT World Canada. Covering technology as it applies to business users. Multiple COPA award winner and now judge. Paddles a canoe as much as possible.
Previous article
NetSuite gives retailers a leg up with new offerings
Next article
Spendwallet takes on Apple and Android Pay