Google Wave: a one-stop-shop for collaboration on steroids

Google Wave, an upcoming Web application that mixes old technologies like e-mail, IM and online documents in a unified, socially-oriented view, could break down the traditional ways in which we compartmentalize and separate information – both as consumers and businesspeople.

As Google unveiled Wave at its annual developer conference here in San Francisco, the company revealed it had a small team of engineers working on the Wave project for a couple years. Google opened Wave to developers, who can build tools and apps to run with it (it’s essentially open source).

The public will not have access to the application until later this year, Google says.

Early reviews have described Wave as a communication and collaboration tool, but the design of it suggests this technology will be something bigger: It combines the myriad trends we’ve seen the last couple years on the Web into one application.

For consumers, Wave represents Google’s answer to the emergence of streaming, or real-time, Internet applications, as evidenced primarily by the rise of social networks. A “stream” is represented best by a Twitter homepage or a Facebook News Feed. On those web pages, content flows down the page for you to consume at your leisure. You might comment on a piece of content, share it with friends, or just let it pass downstream without touching it.

Wave seems to embrace this streaming interface by using e-mail and messaging as a starting point. In one fluid view, a Wave homepage includes short messages (think: Twitter), communication with large groups (think: Facebook) and basic collaboration tools to engage with the content (think: instant messaging and e-mail). 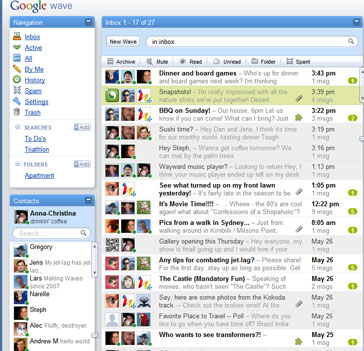 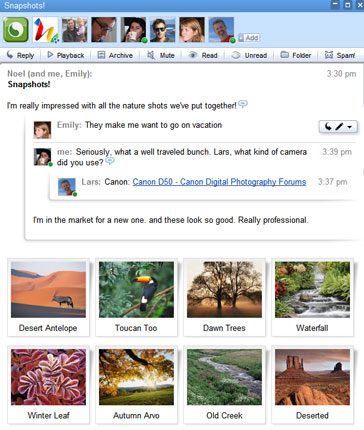 The information you share could be something as static as an e-mail message and the ensuing discussion about it, or as dynamic as an event invitation, with a list of your friends who might attend, and a Google Map showing the event location.

If you are invited late to a Wave thread, you can hit a replay button that allows you to catch up with what you missed-like Tivo for Web content. Over time, Google wants Wave to work with other websites. 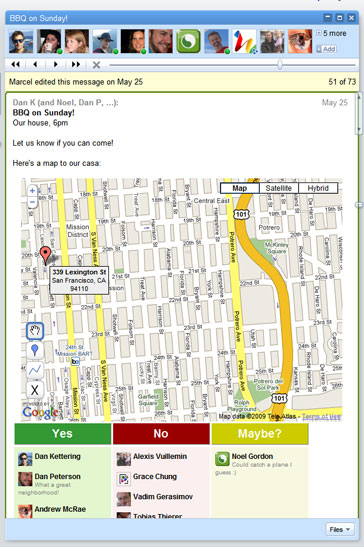 Wave doesn’t require your friends to be loyal to one specific web service; it’s designed to combine content from places all over the Internet. Because Wave will have its own text editor and allows you to easily upload multi-media content, some speculate whether it will cannibalize core web services (even some of Google’s, like Google Docs or Picasa). But it’s too early to tell whether or not the service will be advanced enough to have people ditch those apps, if at all.

Since Wave is open source, other popular web apps (like Twitter) can become part of the Wave experience rather easily.

In the end, Wave’s greatest asset could be that all this information can become more useful from ties to Google’s core product: search. While you can share information on social networking services such as Twitter and Facebook, the options for discovery on those services leaves something to be desired.

How It Could Help Us Work:

As for businesses, companies desperately need a technology like Wave to help their employees collaborate in a more streamlined way. Unfortunately, most enterprises remain years away from switching to this type of information stream, due to their current technology infrastructures.

The idea of Wave isn’t predicated on putting information into tidy folders like you have on Microsoft SharePoint, the document management system embraced widely throughout corporate America. Instead, it’s based on the notion of letting information flow freely for users to interact with on a real-time basis, much like we do on the consumer web.

It will take businesses, and the software designed for them, a long time to catch up with the innovations of streaming applications.

Today, employees must sort through messy “reply-all” e-mails to engage with content as a group. If you’re working with a document in SharePoint, you must “check it in” and “check it out,” making it hard for multiple people to contribute in real-time.

With technologies like Wave, users can select groups and individuals whom they want to share content with in a much more eye-pleasing way. Because the content is Web-based, they can update it in real-time.

Innovative enterprise technology vendors, like Socialtext, have designed their web-based collaboration apps to incorporate stream-like formats, which allow you to edit wikis and share short, Twitter-sized messages. Some companies have adopted the technology, but it could be years before a majority of businesses embrace such a paradigm. With Google putting its weight behind this information format, it could gain more steam.

Google should (and likely will) try to incorporate Wave into Google Apps, its business software that includes Gmail, calendars, documents, spreadsheets and instant messaging. If they can show how users can interact with business content using Wave, it could increase the product’s value in the eyes of enterprise technology buyers.
C.G. Lynch covers Google, Facebook, Twitter and Web 2.0 for CIO. You can follow him on Twitter: @cglynch.