Sandy got the biggest headlines Monday for storming ashore and Microsoft got second billing for its official launch of Windows Phone 8.

But Google also announced some new products yesterday, even though itslaunch events were cancelled due to Sandy. Instead, Google posted itsnews via a blog: a new Nexus 4 smartphone and a bigger Nexus tablet areon the way.

The Nexus 4 phone will be made by LG Electronics Inc. and also featuresa minor update to the Android phone OS, according to our source articlefrom the Toronto Star. The phone will sport a 4.7-inch screen – largerthan Apple’s recently released iPhone 5 but still smaller thanSamsung’s Galaxy SIII.

The Nexus 10 tablet measures 10 inches on the diagonal, so it’s biggerthan the Nexus 7 but about the same dimensions as Apple’s iPad. Sowhile Apple is downsizing via the iPad Mini in a bid to compete withAmazon’s Kindle Fire, Google is actually upsizing its Nexus tablet. TheNexus 10 tablet goes on sale in Canada on Nov. 13 at $409 for 16GB and$509 for 32GB. 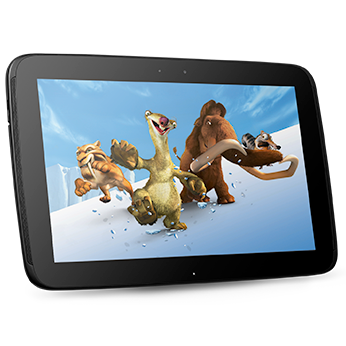 Google is upsizing the latestversion of its Nexus tablet to 10 inches (above). (Photo: Google)

The war seemsto have shifted from the phonezone to the tablet battleground, at least for now.

Christine Wonghttp://www.itbusiness.ca
Christine Wong has been an on-air reporter for a national daily show on Rogers TV and at High Tech TV, a weekly news magazine on CTV's Ottawa affiliate. She was also an associate producer at Report On Business Television (now called BNN) and CBC's The Hour With George Stroumboulopoulos. As an associate producer at Slice TV, she helped launch two national daily talk shows, The Mom Show and Three Takes. Recently, she was a Staff Writer at ITBusiness.ca and is now a freelance contributor.
Previous articleDemand for iOS talent softer after tepid iPhone 5 launch, Maps disaster
Next articleHootSuite, Wattpad, Wajam among entrepreneur of the year winners