Time is money when it comes to doing business on the internet, with sluggish sites often meaning the difference between getting that sale and not. And with a reported half of all web traffic happening on our smartphones, a speedy mobile site is key. Google announced today that it has revamped and relaunched its mobile web speed tool, Test My Site, to help online business owners evaluate the nimbleness of their sites.

According to Google, the average web page takes 15 seconds to load, which, they also say, is about 12 seconds too slow, with the majority of sites losing up to half of their traffic before they even load. The best way to keep that traffic is to speed up your site and allow for faster purchases.

Using the Test My Site tool, businesses (and other sites, too) can enter their URL and get a mobile speed report that shows the load time, test your speed against the sites of your competitors and, by adding some additional information, tell you how much revenue your site could potentially create by speeding it up. 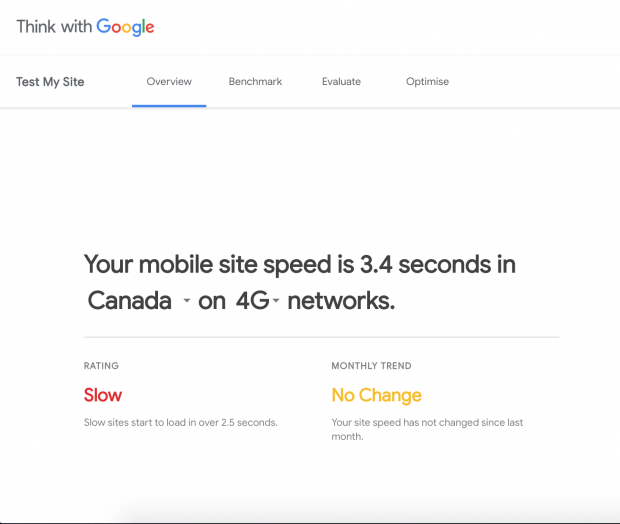 The tool will also generate a free report that will deliver some optimization suggestions specific to the site entered. Suggestions such as reducing the pageweight to below 1,000 KB (the average mobile site in Canada is 3,000, Google reports), optimizing your site search (have an autocorrect feature built in to reduce frustration) and having a fast and efficient checkout time that will also remember the purchase history of your returning customers.

Google sites Vancouver-based clean-up company 1-800-GOTJUNK as an example of a company that benefited from speeding up its mobile site. In the fall of last year, by reducing their pageweight and improving their calendar booking system, mobile sessions increased 19 per cent in a month and online bookings increased by 13 per cent.

Derek Malcolmhttps://www.itbusiness.ca
Derek Malcolm is a writer, editor and content specialist based in Toronto. He has been covering the world of consumer technology for more than 18 years, and is the former Editor-in-Chief of Connected.rogers.com. Follow him on Instagram @derekgmalcolm or Twitter @derekmalcolm
Previous articleCanadian Government’s Future Skills Council to address workforce gaps and trends
Next articleHashtag Trending – Facebook’s moderator backlash; foldable smartphone comparison; a 1TB microSD card