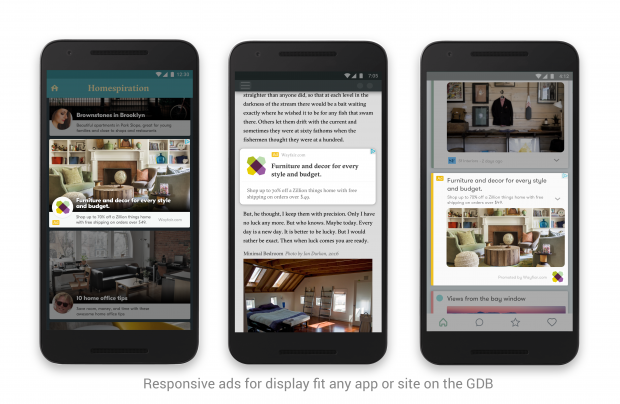 Google is updating AdWords to reflect the growing shift of its search audience from desktop to mobile, the search giant announced today at its Performance Summit.

The new updates will see bigger ads delivered to search results pages, ads for local businesses in Google Maps, ads that automatically morph to fit the screen of any mobile device, and the ability for marketers to adjust bid according to the device their ad is being viewed on. The updates are partly a response to Google seeing that half of the trillions of searches being conducted on Google.com are now taking place from a mobile device.

Perhaps the most noticeable change for Google users will be the expanded text ads. AdWords is now giving marketers more space and more characters to use in their ads. Instead of just one 25-character headline, ads can now feature two 30-character headlines. A consolidated 80-character description replaces the former two lines of 35 characters each. Plus, Google will try to shave down ads rejected for incorrect URLs by automatically extracting the domain from the final URL.

The changes are highlighted in the ad below: 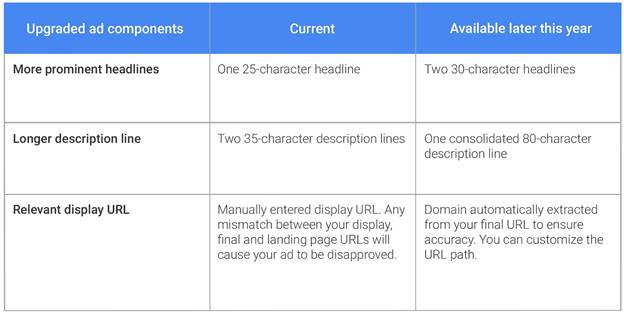 “Based on early testing, some advertisers have reported increases in clickthrough rates of up to 20 per cent compared to current text ads,” Google’s AdWords team writes in a blog post. “We encourage you to start planning for this upgrade before it rolls out later this year.”

Google’s new responsive ads for display feature is a response to the varying screen sizes of mobile devices and gives marketers another way to participate in native advertising. Marketers only need to provide a headline, a description, an image, and a URL and Google automatically designs an ad that will fit the screen of any mobile device while appearing natively embedded on the site of one of its publisher sites or apps involved with the Google Display Network. In a response to search behaviour showing that people are using their mobile devices to seek nearby restaurants and stores, new local search ads will be added on Google.com and Google Maps. In Canada, 42 per cent of all searches conducted on mobile are goal-oriented, according to Google, meaning they’re looking to make a purchase or make plans for their next action.

“Maps users may start to see promoted pins for nearby coffee shops, gas stations, or lunch spots along their driving route,” Google says. “Local business pages are also getting a brand new look – to encourage consumers to explore your store before they even arrive, we’re adding new features like special offers and ability to browse product inventory.”

Google says that 40 per cent of conversions related to mobile searches are taking place offline and that 74 per cent of those conversions happen within one hour of the search being conducted.

Google hasn’t put a clear release date on the new features it announced today, saying only they’d be coming “later this year.”

Brian Jacksonhttp://www.itbusiness.ca
Editorial director of IT World Canada. Covering technology as it applies to business users. Multiple COPA award winner and now judge. Paddles a canoe as much as possible.
Previous article
NetApp speeds up drafting process for the Denver Broncos
Next article
Now financial advisors can use Wealthsimple too